Cougars knock off Worth County for region 1-AAA basketball title 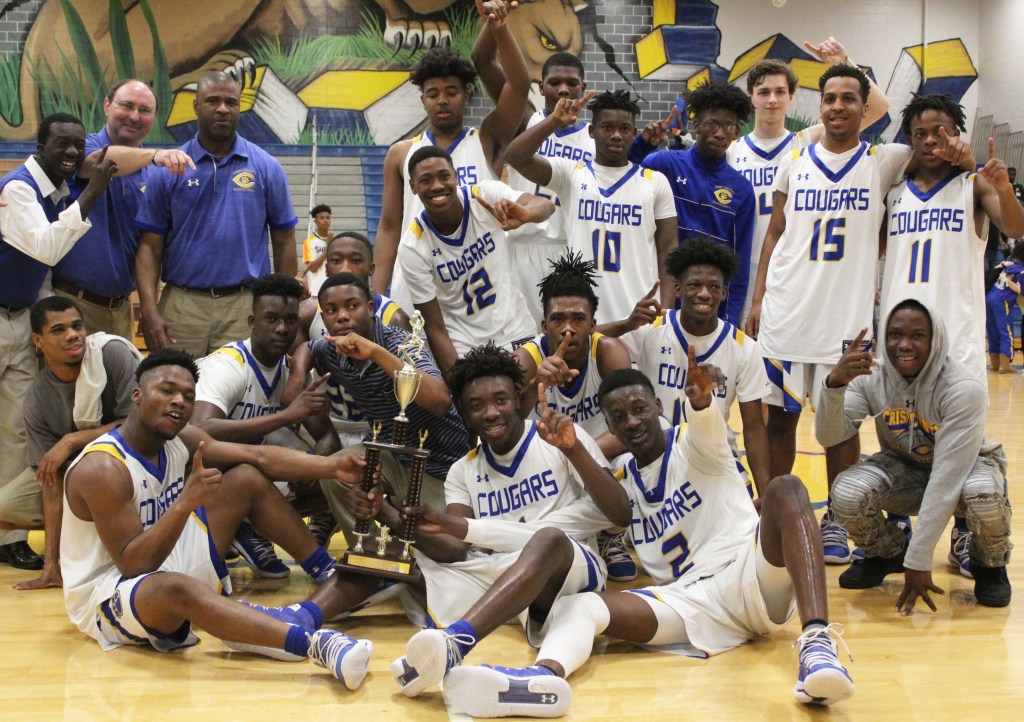 The Crisp County High School basketball team pictured with the GHSA 1-AAA region championship trophy after defeating Worth County for the title on Tuesday night in Cordele.

CORDELE— The Crisp County High School boys’ varsity basketball team defeated the Worth County Rams 61-56 in the final game of the regular season on Tuesday night in Cordele to take the 2018-2019 GHSA region 1-AAA title.

The Cougars came out hot in the first half and led by as many as 20 points halfway through the second quarter before the Rams put together a strong comeback attempt to cut the CCHS lead to as close as one point halfway through the fourth period. Crisp ultimately held off the Worth comeback by making some big defensive stops down the stretch to win the trophy.

“We knew Worth wasn’t going to lay down. They made a good run, but we just hung in there and made some big ones down the stretch once we settled down,” said CCHS Head Basketball Coach Stacy Stephens.

The Rams hit an early three-pointer for the first score of the game, but the Cougars dominated over the remainder of the opening quarter, as they outscored Worth 19-4 after falling behind on the early Ram score. PJ Coleman led CCHS in first quarter scoring with seven points by way of a three-pointer, a mid-range jump shot and a pair of free throws. KJ Williams scored five in the quarter for the Cougars with a three and a fast break layup. Damion Cross added another three for Crisp County late in the quarter, while Jayren Fox and Malik Hall each tacked on two first quarter points. Crisp was ahead 19-7 going into the second period.

The Cougars brought the lead out to 29-9 after starting the second period on a 10-2 run, but the Rams answered with a big run of their own late in the first half to cut the Crisp lead to 11 at halftime. Williams and Hall each scored four in the quarter for Crisp, and Coleman added to the total with his second made three-point shot of the game. Cross, Nathan Willis and Ty McKenzie combined for the remaining five points of Crisp’s 16 total in the second quarter. The Cougars led 35-24 at halftime.

Worth County kept the momentum rolling from the first half as they outscored Crisp 15-8 in the third period. Tubby Spivey helped keep the Cougars in front with five third quarter points on a pair of layups plus a free throw. Williams had two points in the period, and Fox scored one. Crisp led 43-39 after three quarters of play.

Hall scored on a layup to push the Cougars back ahead by six points at the start of the fourth quarter, but Worth put in the next five points to get back to within one point of the CCHS lead at the 5:35 mark of the final period.

A quick 6-2 run on baskets by Hall, McKenzie and Spivey put CCHS ahead 51-46 with three minutes and 40 seconds to play in the game. Williams subsequently scored an important layup to get Crisp back up by five points near the two-minute mark following a Worth County score.

Williams came up with a big steal on the next Worth County possession, and Coleman then hit a pair of free throws to stretch the Cougar lead back out to 59-50 with 56 seconds left on the clock. Worth added six more points to their total over the course of their final few possessions, but Hall scored his ninth and tenth points of the quarter on a pair of late free throws to help see the game out for the 61-56 Cougar win. Hall’s fourth quarter output accounted for 10 of the 18 CCHS points in the fourth period, while McKenzie, Spivey, Williams, and Coleman had two apiece for the remaining eight.

“They were just really excited to play, and they came out… and man it was clicking,” Coach Stephens said on the performance of the Crisp County Cougars. “We played a little tight in the third, but in the fourth I thought we loosened up. We had some guys in foul trouble so we went deeper in the bench than we normally would, but we had a lot of guys step up.”

Originally the game was set to be the regular season finale for both teams, and over the last couple of weeks it looked as if the contest was only going to decide the region’s runner-up. Monroe High appeared to have already locked up the title in January. However, the Tornadoes later forfeited wins from this season due to an academically ineligible player having participated for the majority of the season, leaving the door open for Crisp to take the region crown.

The Cougars will be hosting a state playoff game next weekend, most likely on Saturday, February 16. The time, opponent, and the rest of the state bracket is still to be determined with the completion of the other AAA region tournaments this week.

The Lady Cougars and Lady Rams also played a game that came down to the final few minutes earlier on in the night. Worth won the girls’ game by a final score of 48-41 after holding off a Crisp County second half comeback attempt.

Worth led 9-7 at the end of the first quarter. Aaliyah Hardemon scored five of the seven Crisp County first period points, and Adasia Lee made a layup for the other two.

The Lady Rams outscored CCHS 12-3 in the second quarter to take a 21-10 lead into the halftime break. Lee and Chelsey Harvey were on the second period score sheet for Crisp.

Worth subsequently extended their lead in the third quarter by outscoring Crisp 15-14. E’lacious Holt put in seven of the 14 Crisp points in the third period, while Peyton Bozeman, Harvey, Hardemon and Jadah Mumphrey combined for the other seven. Worth County led 37-25 entering the fourth period.

The Lady Cougars later put together a big run to cut Worth County’s lead down to just one-point at 42-41 late in the fourth quarter, but the Lady Rams scored the game’s final six points to hang on for the win by the final score of 48-41. Holt put in seven points during the fourth period for Crisp, while Lee scored six, with Bozeman and Harvey each contributing two points to the Lady Cougar total.