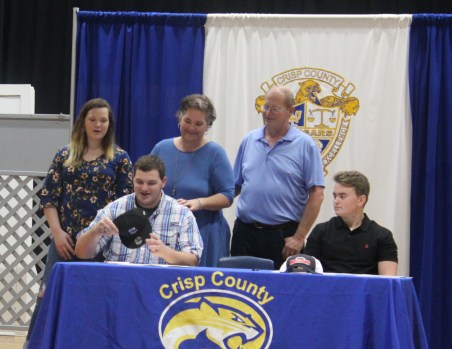 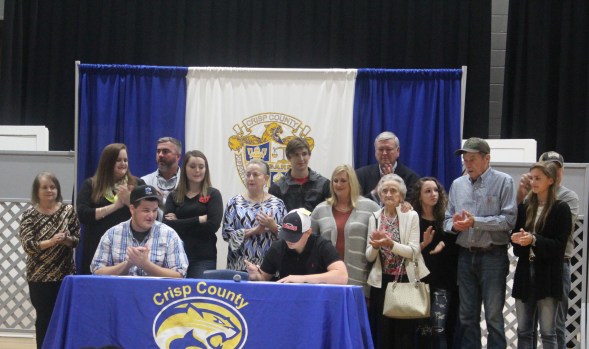 Alton Stephens signs for Georgia Military College during the CCHS Signing Day event on Wednesday with many members of his family also pictured.

CORDELE— Crisp County High School had two football players announce their college decisions at an event at the school on Wednesday morning.

The two CCHS players, Joshua Smith and Alton Stephens, made their decisions official on Wednesday’s National Signing Day that saw many high school football players from around the country announce their college destinations.

“Both Alton and Josh were a part of the offensive line group when I first got here,” Crisp County Head Football Coach Brad Harber said at the beginning of Wednesday’s signing event. “These two guys have worked extremely hard.

“Josh has played offensive line for us, and I have told him ever since he was a sophomore that he has one thing that a lot of us don’t have. He is a very tall and very big human being, and that is what a lot of colleges are looking for. We are really proud of Josh,” Harber added before turning the floor over to Smith to make his announcement official.

“I just want to thank all of y’all for supporting me and helping me on my journey and believing in me,” Smith said to his teammates, coaches and others in attendance at the event just before announcing his decision. “I will be taking my education and football skills to Community Christian College in South Carolina,” he concluded.

Harber then spoke briefly about the efforts Stephens has put in for the CCHS football program before the player’s announcement was made official.

“This summer Alton attended a lot of specialist camps and he competed really well. At one point he was in the top 10 nationally for the long and short snappers and specialists,” said Harber.

Following that, the microphone was turned over to Stephens so that he could announce his college destination.

“Before I sign, I’d just like to thank a few people: my family, my coaches, my teachers, and most importantly God, because without him I would not be here today,” said Stephens. “With that being said, I’ll be going to GMC, Georgia Military College,” he announced.

“One of the things that I am most proud of with not only these guys but anybody today that is going on to play college football is that you have to be qualified in areas outside of football to participate at the next level. Grades matter, behavior in the classroom matters, SAT and ACT scores matter,” Coach Harber said. “I couldn’t be prouder today of the guys that are sitting before you, because they have handled their business not only on the football field and athletically, but in the classrooms as well.”

Before the conclusion of the program, Coach Harber stated that up to five more CCHS senior players will likely be signing to play college football in the coming weeks.

“We do have four or five other seniors that have offers as well. So basically it is National Signing Day today, but the signings are not over for this senior class that has accomplished so much,” Harber concluded.