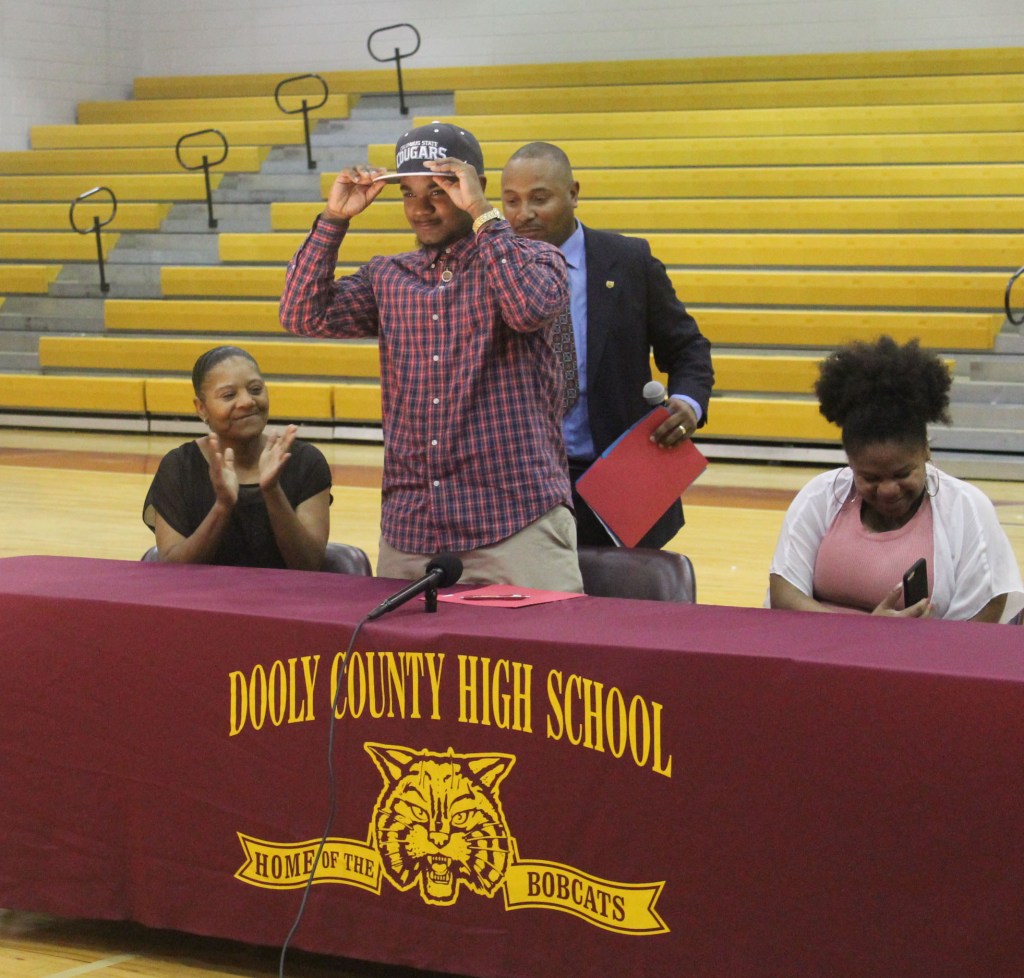 “We are fortunate that we have five young men who have committed to sign and play at three different schools,” Dooly County Head Football Coach and Athletic Director Coach Jarvis said at the beginning of the signing day event.

“The first young man that I am calling up… was a three-year starter, two time all-region honorable mention football player. He was a captain for our team this year and he ended the year with 109 tackles. Going to be greatly missed in this program because he is a hard-working young man and he is also one of the guys that you always can depend on… Javarese Black.”

Black then announced the school he was planning to attend to play football.

“I will be attending Columbus State University,” he said.

Following that, the next DCHS player to sign was Raquavious Billings, who finished his senior season with 114 total tackles, an interception and three forced fumbles.

“A three-year starter, who did not play his junior year because he broke his leg or he would have been a four-year starter for us. Great young man, hard-working young man that finished the year as one of our captains,” Coach Jarvis said about Billings. “For the next two years, Raquavious will be attending Community Christian College in Atlanta.”

The next two Dooly signings, Malik Burns and Reggie Smith, both also signed for Community Christian.

“Our leading tackler for the last two years, first team all-region, and he was first team all-state on the GACA team,” were just some of the accomplishments Coach Jarvis listed about Burns’ career at DCHS.

Burns finished this season with 120 total tackles (24 for a loss of yards) six sacks, three forced fumbles, and one fumble recovery.

Jarvis then named off a long list of accomplishments Smith made as a Dooly County football player.

“Also a three-year starter, first team all-region, first team all-state. I call him our utility guy, he could play quarterback, running back, receiver, cornerback… He was Mr. everything for us this year,” said Jarvis. “For the next two years Reggie’s going to be attending Community Christian College in Atlanta also.”

Dooly’s final player to sign during the event was quarterback Bo Lawson.

“For the next two years I will be taking my talents to Hutchinson Community College (in Hutchinson, Kansas),” Lawson told the crowd.

Lawson put up 1771 passing yards and 18 passing touchdowns during his senior season to go with 1253 rushing yards and 16 rushing scores, plus one touchdown reception.

Coach Jarvis finished up the program by offering some important words of advice to his players.

“One of our special days of the year, I tell everybody that this and graduation are my two favorite days, and I am glad to see our young men continue their education with the opportunity to play football,” he said. “This is a one-year deal, so each year you have to earn it back. That means you have to take care of your business in the classroom, in the weight room, and on the track because if you don’t it will be cut off. So make sure you understand that you have to do everything it takes to keep it. Make sure that you use that to get your education,” Jarvis concluded. 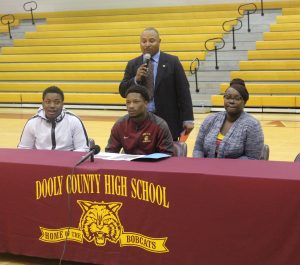 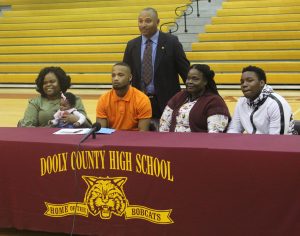 DCHS senior football player Malik Burns pictured with his family and Coach Jarvis after making his decision to go to Community Christian College in Atlanta official. 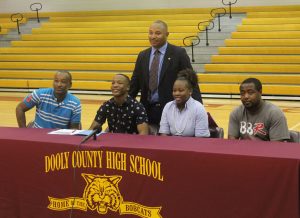 DCHS senior Reggie Smith pictured with his family and Coach Jarvis. Smith was one of three DCHS football players to sign for Community Christian College in Atlanta. 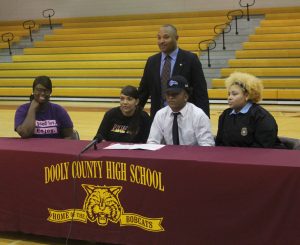 DCHS quarterback Bo Lawson announced at Wednesday’s signing day event that he will be beginning his college football career at Hutchinson Community College in Kansas.