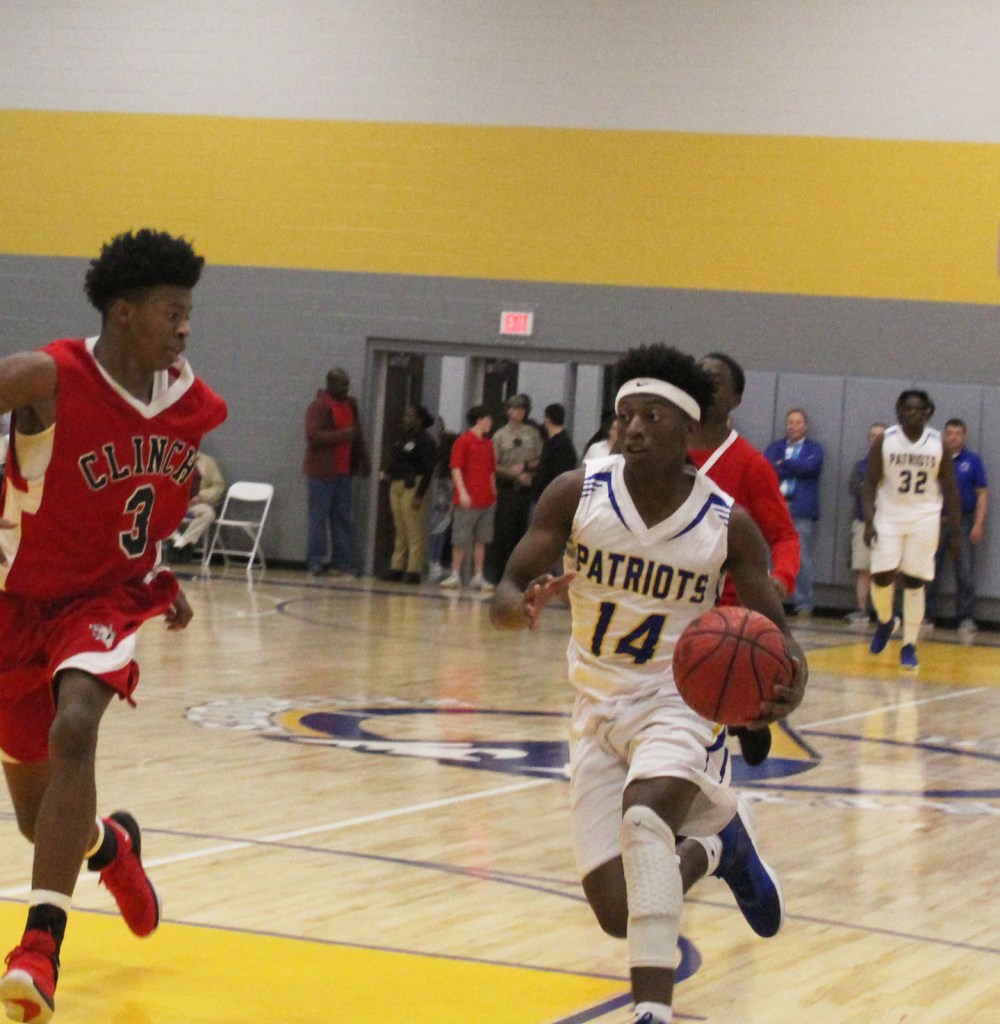 ROCHELLE— This weekend saw both Wilcox County High School basketball teams competing in the region 2-A semifinals on their home floor, but Clinch County defeated the Patriot teams in close games to make it into Saturday’s region title games.

Clinch defeated the Lady Patriots on Friday afternoon by a final score of 61-56, and the Panthers defeated the Patriots 74-69 later in the night.

The Lady Patriots, now 16-10 on the season after the region tournament, split both regular season games against the Clinch County Lady Panthers (19-6) this season, but Friday’s region tournament game in Rochelle went in favor of Clinch.

Wilcox had an 11-9 lead at the end of the first quarter behind nine points from Destiny Tisdol, including a pair of three-point baskets, and JaMerical Marshall scored the other two Lady Patriot first period points.

The Lady Patriots subsequently outscored Clinch County 16-11 in the second quarter to take a 27-20 lead into halftime. Alayshia Dixon put in eight of the 16 Wilcox points during the second period, while Tisdol had six points in the quarter on two more three-pointers, and Marshall tacked on the remaining two points.

A big third quarter by the Lady Panthers, in which they outscored Wilcox 20-11, helped Clinch take a 40-38 lead into the fourth period. Dixon scored six more for Wilcox in the quarter, while Grace Lawson, Nicole Rucker, and Asia Montgomery combined for the other five.

Clinch then outscored Wilcox 21-18 in fourth quarter action to finish the game off for the 61-56 win. Tisdol added eight points to her total in the period, while Dixon had four, with Marshall and Montgomery tacking on three each.

The class A state playoff bracket has the 11th ranked Wilcox Lady Patriots scheduled to host Elite Scholars Academy (ranked 22nd) in the first round of the state playoffs, with the game to be played in Rochelle on Friday night starting at 7 p.m.

The Wilcox Patriots (21-3) had beaten Clinch County (17-8) twice in a pair of close contests during the regular season, but the fourth seeded Panthers upset the top seeded WCHS Patriots in Friday night’s region semifinal game in Rochelle.

After one quarter of play, Clinch held a 15-14 lead over the Patriots. Jordan Brown put in seven of the first period points for Wilcox with a three-pointer and a pair of two-point baskets, while Chrisabian Marshall scored five and Azavion Deans had the other two.

In the second period, Clinch outscored Wilcox 19-17 to take a 34-31 lead into halftime. Keyshawn Howard scored five points for the Patriots in the quarter, while Deans, Brown, and Desmond Tisdol pitched in with four apiece.

The Patriots came out strong in the second half with an 11-3 run at the start of the third quarter to take a 41-37 lead near the halfway mark of the period. Deans accounted for six of the 11 points during the run on three mid-range jump shots, while Tisdol made a layup and Brown scored a basket plus a free throw for the other points during that stretch.

The Patriots quickly grabbed the momentum early in the fourth quarter with an 8-2 scoring run on six points from Tisdol and two from Brown that saw Wilcox close the Clinch lead to one point at 53-52 at the 6:18 mark of the final period.

A pair of Panther free throws extended their lead back out to 55-52, but Tisdol grabbed an offensive rebound on the next Wilcox possession and fought through a foul to make a layup before hitting the resulting free throw to tie the score at 55 apiece with just under six minutes to go in the game.

Clinch retook the lead at 57-55 on another pair of free throws shortly after, but the Patriots answered with a 9-3 scoring run to take a 64-60 advantage with just under four minutes to go in the contest. Brown tacked on five more points to his total during the Wilcox run, while Howard and Tisdol combined for the other four.

The Panthers then made one final big run to come away with the win, outscoring the Patriots 14-5 over the final few minutes of the contest to escape with the victory. The Patriots got back to within two points of the lead after a Howard three-pointer with 17 seconds to play in the contest, but Clinch made a free throw and came up with a big defensive stop followed by a layup just before the buzzer to hold off Wilcox at the end by a final score of 74-69.

Tisdol totaled 13 points over the course of the fourth quarter, while Brown came up with seven and Howard had five as the Patriots outscored Clinch 25-23 in the period, but the Panthers were able to hold on.

Brown put up a total of 23 points to lead Wilcox scoring in the contest. Tisdol put in a total of 19 on the night, while Deans and Howard were both in double-digits with 12 and 10 points respectively, and Marshall finished with five.

The Patriots will enter the state tournament as the sixth ranked team in class A, meaning they will have a first-round bye going into the playoffs. They will enter the state tournament in the second round and will be hosting the winner of this weekend’s first round matchup between Manchester (ranked 22nd) and Macon County (11th). The second round of the class A state playoffs is scheduled for February 20-21.