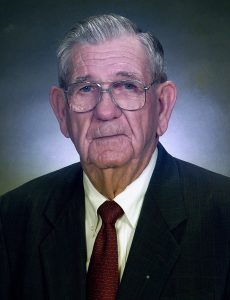 Herbert Webster McKinney, age ninety-two, passed away Sunday, February 10, 2019, at the Fellowship Home at Cordelia Manor.  A native of Crisp County, Webster was the son of the late LaFayette McKinney and Ola Mae Bridges McKinney.

He was a World War II veteran and a member of the invasion forces sent to Japan.  Webster was a local farmer and business owner and served for several years as a director of Cordele Banking Company.  He was a loving husband and devoted caregiver to two wives, Margery Grimsley McKinney and Elizabeth Wade McKinney, both of whom preceded him in death.  He was also preceded in death by his siblings, Helen Davis, LaFayette McKinney, Jr., and Janie Kate Mathews, and his son-in-law, Ferrell Cofer.  Webster was a member of Ebenezer Baptist Church where he served as deacon for many years.  He loved hunting, fishing, and traveling.  He will be remembered fondly for his sense of humor and his devotion to his family, his friends, his community, and his church.