Cougars hold off Kendrick for first round playoff win 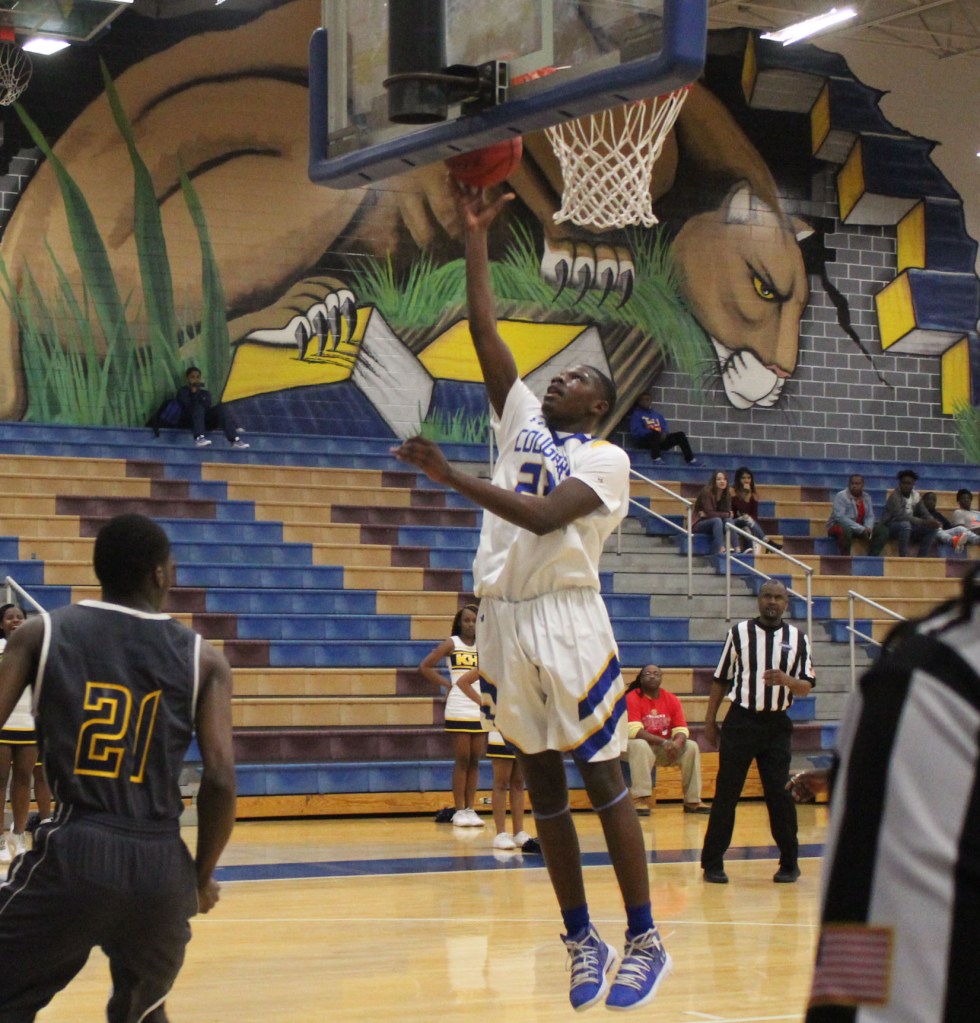 Crisp County's Cortez Thomas gets behind the defense for a layup during the first round playoff win over Kendrick on Thursday night. Thomas finished the game with 12 points and 10 rebounds in the 74-69 Cougar win.

CORDELE— The Crisp County High School boys’ basketball team (now 12-12 on the season) defeated the Kendrick High School Cherokees (17-11) 74-69 in Cordele on Saturday night in the first round of the GHSA class AAA state tournament.

The Cougars built a lead in the first half and they were ahead by as many as 15 points early in the third quarter, before having to hold off a big comeback attempt by Kendrick that saw the Cherokees tie the game near the end of the third period.

First quarter action saw the two teams swap the lead several times, but the Cougars scored the final five points of the period to take a 16-12 lead into the second. Cortez Thomas and Willie Poole both scored five points for Crisp County in the first quarter, while KJ Williams, AJ Lofton, and Ty McKenzie each tacked on two points with a bucket apiece.

The Cougars subsequently outscored Kendrick 30-22 in a fast paced second quarter. Thomas scored six more points in the second period on three layups, and PJ Coleman scored his first five points of the night in the quarter. Poole and Malik Hall each added four points, while Tubby Spivey, Williams, and McKenzie each accounted for three points of the Cougar second quarter scoring total, and Lofton pitched in with two. Crisp County was ahead 46-34 at halftime.

The Kendrick Cherokees used a big third quarter to fight their way back into the game by outscoring the Cougars 25-17. Williams and Jayren Fox each had crucial scores in the period for the Cougars, and the two combined for eight of the 17 CCHS third quarter points. McKenzie, Spivey, Poole, and Damion Cross combined for the other nine, and Crisp was ahead 63-59 going into the final period.

Both teams picked up the defense in the fourth quarter, and the Cougars were able to hang on for the win after knocking down some crucial free throws when they needed them most.

Crisp started the fourth quarter with a score on a free throw by McKenzie, followed by two buckets from Williams that saw CCHS take a 68-61 lead with five minutes to play in the game.

Kendrick responded with a 6-1 scoring run between several defensive stops that cut the Crisp lead back down to two points at 69-67 with 25 seconds to play.

From there, McKenzie and Coleman combined to hit five out of six shots from the free throw line to help the Cougars put the game away for the 74-69 win.

Crisp outscored Kendrick 11-10 in the fourth quarter, behind four points from Williams, three apiece from Coleman and McKenzie, and one from Thomas.

Williams led the Cougars in scoring in the game with 13 points, while Thomas, McKenzie and Poole also finished with double-figures in the scoring column on the stat sheet.

The Cougars will be at home for the second round of the state tournament as well, with a game against Johnson Savannah this Thursday night.

Johnson will bring an overall record of 20-7 into Thursday night’s game in Cordele. The Atomsmashers went 16-0 this season throughout region play, but fell in the semifinals of their region tournament to end up as a three seed for the state playoffs. Johnson defeated Liberty County 75-55 in the first round of state over the weekend, and they had several tough games against state title contending teams on their schedule over the course of the regular season. Johnson made it into the quarterfinals of last season’s AAA state tournament before falling to eventual state champions Greater Atlanta Christian.

The Cougars and their second round opponent from Savannah played one common opponent during the regular season, the Statesboro Blue Devils. Johnson lost at Statesboro 61-49 back in early December, while Statesboro beat Crisp County 64-56 in a tournament in Albany during Christmas break.

Thursday’s AAA state tournament second round matchup in Cordele is scheduled for a 6 p.m. tipoff.