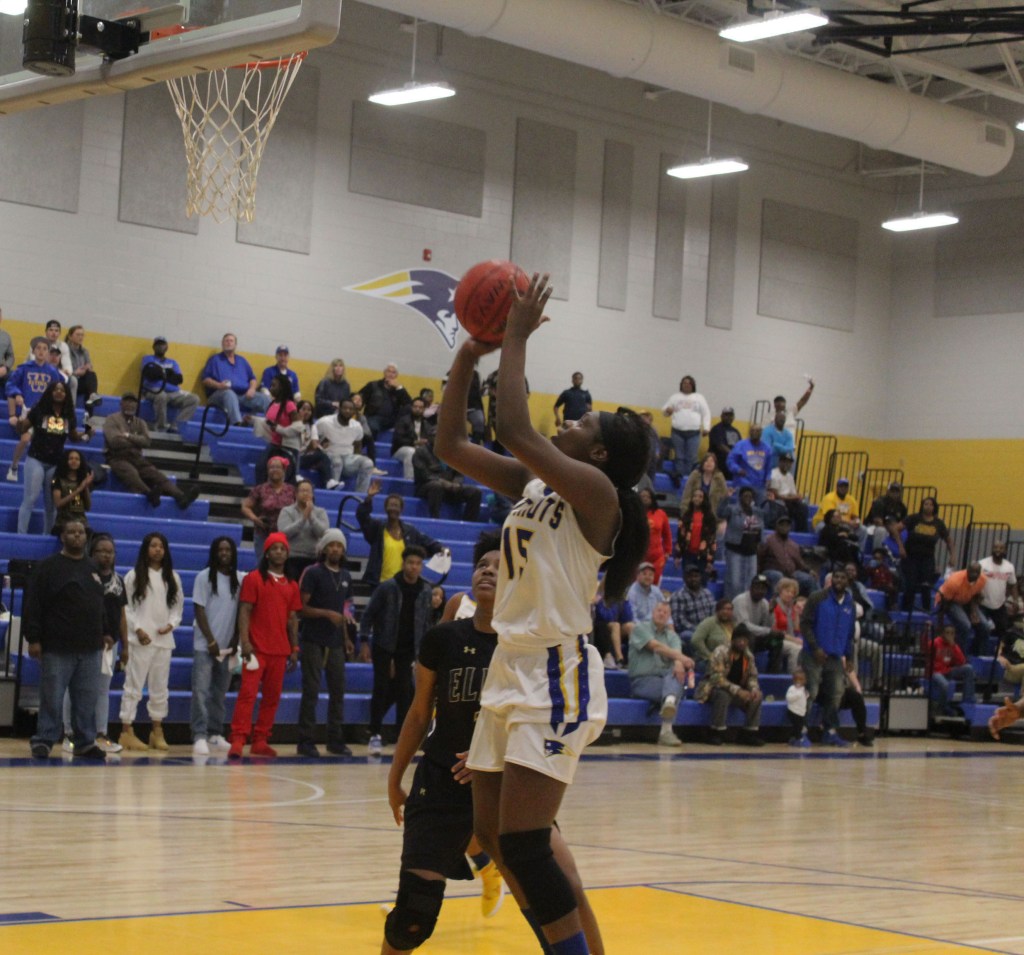 ROCHELLE— The Wilcox County High School girls’ basketball team found themselves trailing by as many as 14 points in the first half of Friday night’s first round state playoff game against Elite Scholars Academy in Rochelle before fighting their way back to an exciting win.

A big scoring run late in the first half saw Wilcox cut the lead back down to five points going into halftime, and from there the two teams battled in a back and forth second half that needed an extra four minutes of overtime to decide the winner. The Lady Patriots ultimately pulled out the 75-73 win in overtime, and some key adjustments helped Wilcox turn the game around, according to Head Coach Santita Coon.

“The adjustment was to change the defense. We forced some turnovers and when the tempo of the game sped up a little bit, we got back into it,” she said.

The Lady Patriots were behind 25-11 near the halfway point of the second period, but they put together a 12-3 run from there to cut the deficit down to five entering halftime. Destiny Tisdol scored nine points for Wilcox in the second quarter. Montgomery and Grace Lawson tacked on three apiece, while Marshall scored two in the period. Elite Scholars Academy had the lead at 28-23 at the half.

The Lady Patriots continued to fight their way back in the second half, as they outscored Elite Scholars 19-16 in the third quarter. Marshall and Alayshia Dixon took care of the scoring for Wilcox in the period as the two combined for all 19 of the Wilcox points. Marshall scored 10 on three layups, a three-pointer and a free throw, while Dixon scored her nine on three layups and three free throws. The Lady Patriots trailed 44-42 going into the fourth quarter.

Wilcox started the fourth period with a 6-1 scoring run to take a 48-45 lead with four and a half minutes to play in regulation. The scoring run came by way of a three-point shot by Tisdol plus free throws by Dixon and Montgomery.

The teams swapped the lead several more times over the remainder of the fourth period. Montgomery, Tisdol, and Dixon all had important scores for Wilcox during the last few minutes of regulation.

A layup by Marshall later put the Lady Patriots in front 58-56 with 22 seconds to play in the fourth period, but Elite Scholars Academy tied the score up with a layup of their own with just eight seconds remaining. Wilcox was unable to win the game on the last possession of regulation time, so the teams were forced to play four minutes of overtime to decide who would advance to the second round of the state playoffs.

Elite Scholars Academy scored the first points of the overtime period to take a 60-58 lead, but Marshall answered with a pair of free throws to tie the score up once more. The crucial free throws would prove to be Marshall’s last points of the night, as the Lady Patriots’ senior picked up her fifth foul of the game shortly after tying the score.

Wilcox trailed 62-60 with 3:31 to play in overtime following a score by Elite Scholars, but the Lady Patriots used a quick 5-0 scoring run with three points from Dixon and two from Erianna Hargrove to take a 65-61 lead at the 2:50 mark of the overtime period.

Hargrove later made another crucial shot for the Lady Patriots following back-to-back scores by Elite Scholars, which left Wilcox ahead at 67-66 with just over two minutes left in overtime.

Later in the period, Dixon came up with a steal near midcourt and subsequently scored on a layup to put Wilcox back in front after Elite Scholars had retaken the lead.

The teams were tied at 69 apiece after a player from Elite Scholars Academy split a pair of free throws with just over a minute and a half remaining, and from there Wilcox outscored ESA 6-4 to win the game.

The scoring plays for the Lady Patriots over that final stretch of the game were a jump shot by Nicole Rucker, a game-tying layup by Tisdol, which tied the score at 73-73 with 24 seconds remaining, and finally the game-winning score by Dixon on a layup after she had pulled in an offensive rebound.

Dixon scored with less than seven seconds to play, and the last second shot attempt by an Elite Scholars Academy player was off the mark, leaving the Lady Patriots with the 75-73 win.

Marshall was the leading scorer in the game for the Lady Patriots with 20 points before fouling out early in the overtime period.

“I told them (the team) the game is not over… We dig deep for each other. We don’t just rely on one or two players,” Coach Coon said in reference to the rest of the Lady Patriots stepping up after their senior leader had fouled out.

Dixon finished the contest with 18 points, with every point of that total coming in the second half and overtime. Tisdol put in a total of 17 for the Lady Patriots, and Montgomery also ended the contest in double-figures with 11 points. Hargrove finished the game with four points, while Lawson contributed with three, and Rucker had two.

The Lady Patriots will be on the road in the second round of the class A state playoffs at Bowdon High School on Wednesday night with the game scheduled to tip off at 6 p.m.

The Wilcox boys’ team (21-3 record) will also be playing in the second round of the state tournament this week, with a home game against Macon County (18-7) Thursday night at 6 p.m. 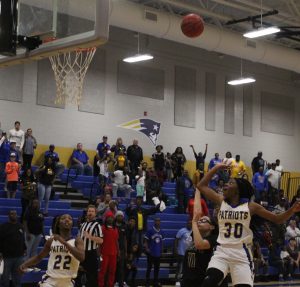 Wilcox County’s Destiny Tisdol (30) releases a shot attempt during the second half of Friday night’s game. Also pictured: WCHS senior JaMerical Marshall (22) gets into position for a potential offensive rebound. 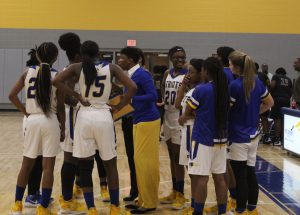 The Lady Patriots huddle up during a timeout to listen to Head Coach Santita Coon’s strategy.