Both Dooly County basketball teams advance into second round of state 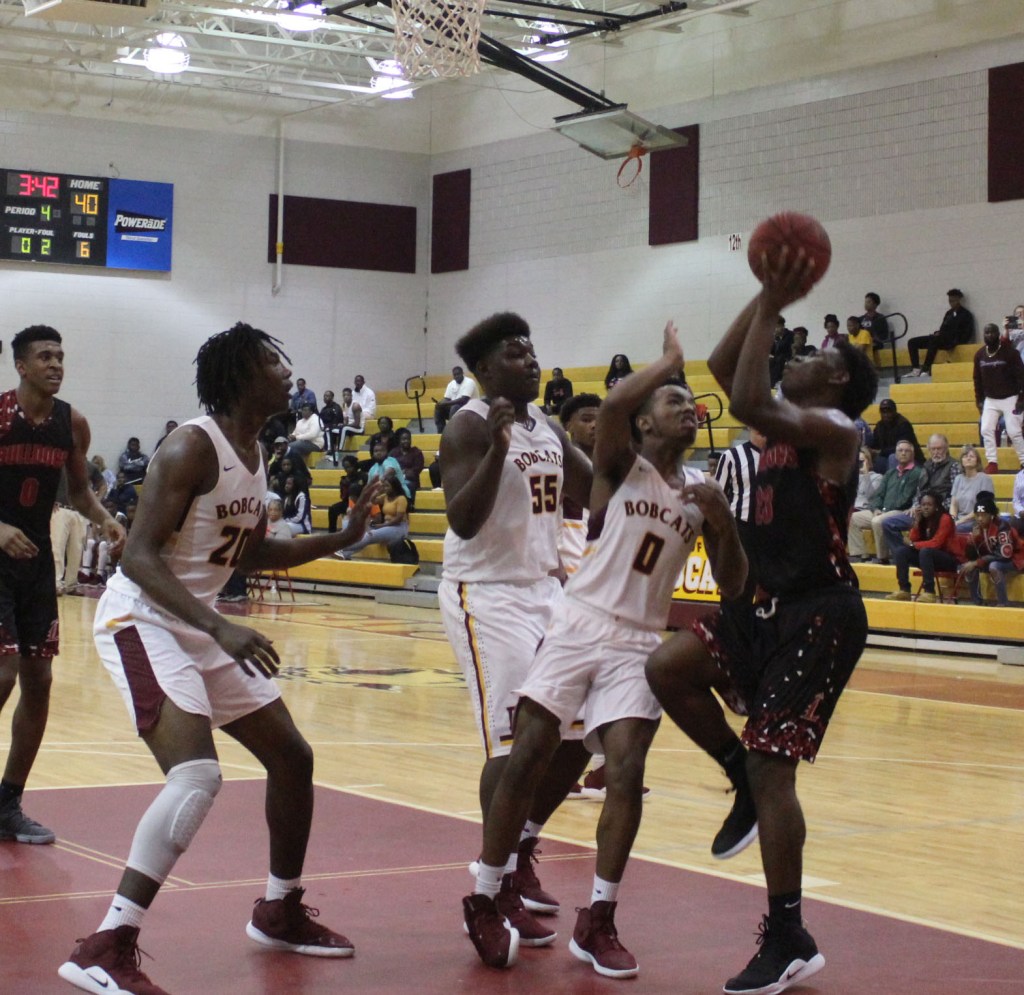 Dooly County's Bubba Almond (0) defends as a Lanier County player drives to the basket for a layup during Saturday night's playoff game in Vienna. Jeff Felton (55) and Zeff Felton (20) are also pictured for Dooly, as they get into position to potentially rebound a missed shot.

VIENNA— Both of Dooly County High School’s basketball teams moved into the second round of the GHSA class A state tournament after wins Saturday night on their home floor.

The Bobcats outscored Lanier County 14-9 in the first quarter of Saturday night’s first round playoff game behind eight points from Eric Ivory, and two apiece from Zeff Felton, Reggie Smith, and Zanders.

Lanier kept the score close in the second quarter, as they outscored the Bobcats 13-11. Bubba Almond scored six points in the quarter for Dooly, while Ivory knocked down his second three-pointer of the night, and Zeff Felton pitched in with two points. Dooly held a 25-22 lead over the Bulldogs at the half.

The Bobcats started the third quarter with a 6-0 scoring run on a fast break dunk by Zeff Felton, followed by a pair of layups by Jeff Felton.

The Bulldogs subsequently put together a scoring run to close out the quarter and cut back into the Dooly lead, but the Bobcats were in front 40-35 going into the fourth quarter.

Lanier opened up the fourth quarter on an 8-0 scoring run to take a 43-40 lead over the Bobcats at the 3:40 mark of the period.

Jeff Felton then split a pair of free throws to get Dooly back within two points of the lead at 43-41, but Lanier later brought their lead out to four points with a layup just before the two minute mark of the period.

Ivory then hit his third three-pointer of the night on the next Dooly possession to make the score 45-44 in favor of the Bulldogs, but Lanier got back in front by three with a pair of free throws with 48 seconds to go in the contest.

Jeff Felton scored a layup for the Bobcats with 31 seconds remaining to cut the Lanier County lead back to one point at 47-46. The Bobcats committed a foul on the ensuing possession, and Lanier County missed the subsequent free throw before committing a foul on the rebound attempt, giving Dooly the ball and a chance to win the game with less than 30 seconds to play.

Dooly then grabbed a 49-47 lead on the possession, as Zanders connected on a three-pointer with just seven seconds left on the clock.

The Bobcats applied heavy defensive pressure on Lanier on the ensuing possession, and the last second shot from the Bulldogs missed the mark.

Dooly won the game by the final score of 49-47 to advance into the second round of the state playoffs.

The Bobcats will be on the road at Truetlen (27-1) on Thursday night at 6 p.m. for the second round of the class A state tournament.

Dooly and Truetlen matched up once earlier this season in Vienna on January 8, with the Vikings coming away with the win over the Bobcats 53-45 on the night.

The Lady Bobcats easily handled Stewart County earlier in the night in their first round playoff game by a final score of 51-27.

Dooly had scoring contributions from 10 different payers in the game, with Jasmine Clark leading the way with a total of nine points by way of three successful three-point baskets.

The Lady Bobcats will play at Wheeler County (21-5) in the second round of the state tournament on Wednesday night at 6 p.m.