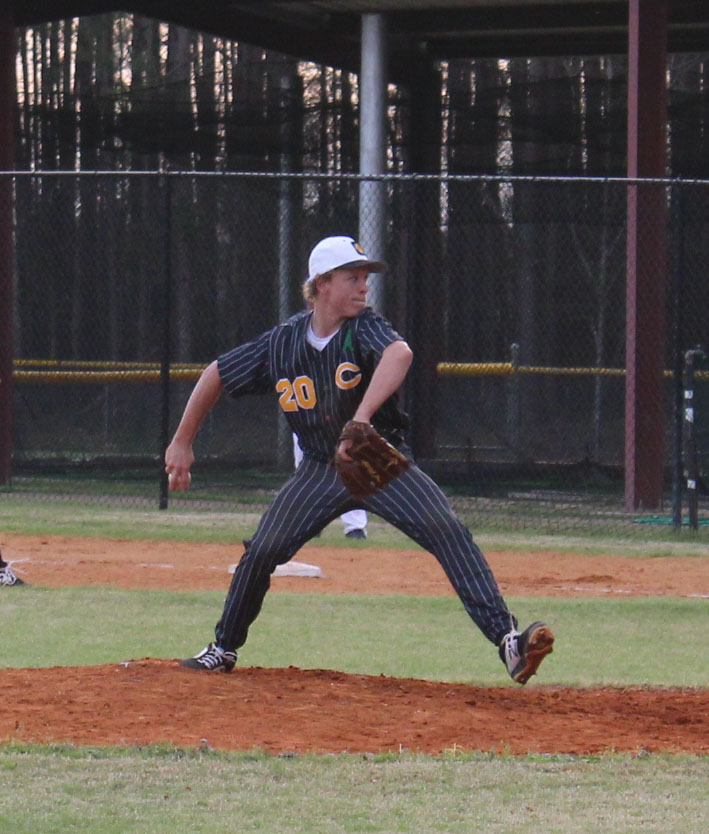 CORDELE— Crisp Academy and Fullington Academy’s varsity baseball team’s got their seasons underway on Monday afternoon with a matchup in Cordele. The CA Wildcats won the contest over the Trojans with a 12-2 run-rule victory after five innings of play.

The Trojans quickly got two runners on base in the top of the first with no one out in the inning after Jack McLeod drew a leadoff walk and Chase Smith followed by reaching base after being hit by a pitch.

CA’s starting pitcher Dylan Farmer subsequently settled in and got the next three Fullington batters out with a pair of strikeouts and a fly out to center. The Wildcats went on to take an early lead in the bottom half of the first frame.

Will Hubbard started out the bottom of the first with an infield hit for Crisp and Farmer followed with a single to centerfield to give the Wildcats two runners on base with no one out.

The Trojans picked up the first out of the frame shortly after on a fielder’s choice groundout to third base, but CA put the first two runs of the game on the board in the next at-bat when Griffin Gravitt hit a pop fly that the Fullington defense was unable catch. Farmer and Baylor Pless each scored on the play, and Spencer Stubbs came up with a two-out RBI single shortly after to tack on the third Wildcat run of the frame. Crisp Academy led 3-0 at the end of the first inning.

CA’s Farmer, and Fullington starter Blake Worley each pitched scoreless frames in the second inning, but CA tacked on two more runs to their lead in the bottom of the third.

Pless started the bottom of the third inning with an infield hit and made it to second base on an error. He later stole third base and made it home on the same play after the throw to third went into the outfield.

Griffin Gravitt and Garrett Gravitt followed up with two consecutive singles to put two Wildcat runners on base still with no outs in the frame. Julian Floyd pushed another CA run across the plate shortly after on a sacrifice fly. Crisp had a 5-0 lead after three innings played.

Fullington subsequently scored their only two runs of the game in the top of the fourth inning to cut into CA’s lead. Fullington’s Hunter Hughes hit a home run to centerfield with one out in the frame to put the Trojans on the board and Brooks Hendrix came up with an RBI single to score Cody Cofty with two outs in the inning.

Crisp entered the bottom of the fourth leading by a score of 5-2 and quickly responded to the Fullington runs with three more scores of their own.

Farmer took first base after being hit by pitch in the bottom of the fourth with two outs, and Pless came up with a base hit in the next at-bat. Griffin Gravitt knocked both runners in with a two-run double in the subsequent at-bat, and Garrett Gravitt followed with an RBI single for the eighth CA run of the contest. The Wildcats were ahead 8-2 at the end of the fourth frame.

Garrett Gravitt pitched a scoreless top half of the fifth, and the Wildcats then finished the game off for the 12-2 run-rule win by scoring four more runs in the bottom of the frame.

Pless, Hubbard, Farmer, and Jacob Odom each scored a run for CA during the fifth inning.

Farmer pitched three and two thirds innings in the game for the Wildcats and allowed two runs (one earned) on two hits and three walks while striking out four Fullington batters. Garrett Gravitt got the last four outs on the mound for CA and recorded two strikeouts.

CA was scheduled to play their first region game this afternoon at Windsor Academy. The Wildcats will host Southwest Georgia Academy on Friday afternoon at 4:30 p.m. for their next game.

Fullington will play their next game at Southland Academy tomorrow starting at 4 p.m. The Trojans are scheduled to play their home opener on Thursday afternoon against Robert Toombs at 4 p.m.