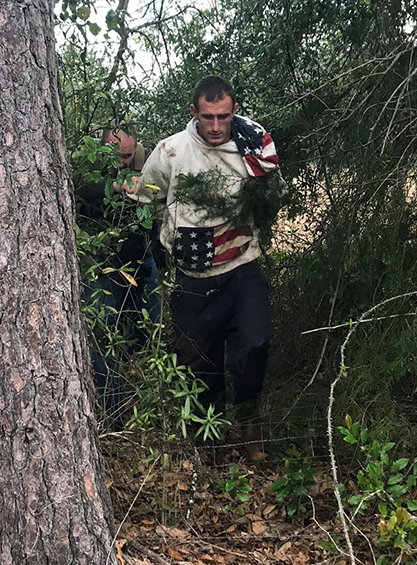 Deputies with the Crisp County Sheriff’s Office arrested two Laurens County residents Thursday morning after a deputy’s attempt to help the two, who were stranded on U.S. Hwy. 280 West with a broken-down vehicle, turned violent.

At approximately 6:40 a.m., Deputy Malinda Bair responded to a call to assist a motorist who needed help jump-starting a vehicle. Crisp County Communications E-911 operators indicated both occupants, 26-year-old Caleb James and 42-year-old Jennifer Kelly Riley, had outstanding warrants. Riley originally identified herself to Deputy Bair as Kristi Riley, who — while not involved in Thursday’s incident — is wanted on a bench warrant for failure to appear.

A brief physical altercation ensued when Deputy Bair attempted to place James under arrest. He then fled into a field in the vicinity of Georgia Veterans State Park on U.S. Hwy. 280 West.

Shortly thereafter, deputies deployed a K-9 unit to track James, who then tried to run again from deputies. After a brief foot chase, James was placed under arrest at around 8:10 a.m. and transported to the Crisp County Detention Center. James faces felony obstruction charges and Riley is charged with giving a false name to officers.