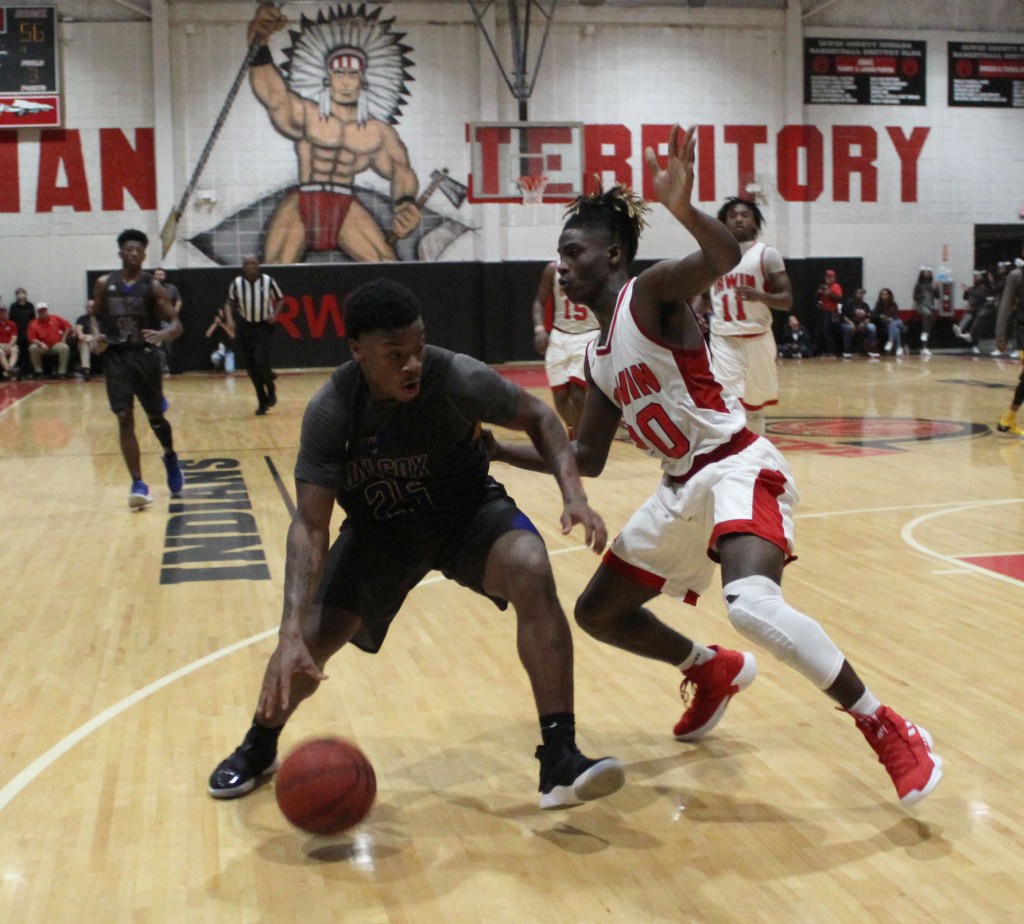 Wilcox County's Desmond Tisdol dribbles the ball towards the basket, as Irwin County's Garland Benyard defends during Wednesday night's state tournament game in Ocilla. The Wilcox Patriots fell to Irwin in the contest by a final score of 80-74.

OCILLA— Region rivals Wilcox County (22-4) and Irwin County (24-4) battled it out for the third time this basketball season in a GHSA class A state tournament quarterfinal game in Ocilla on Wednesday night, with a spot in the final four on the line.

The home standing Irwin County Indians mounted a fourth quarter comeback in front of a capacity crowd to win the game by the final score of 80-74 and end the Patriots’ season.

The Patriots had a lead over their region 2-A rivals for the majority of the contest, but the Indians made some big plays when they needed them most to pull out the win.

The teams were tied at 11 points apiece after the two squads had traded several small scoring runs over the first few minutes of the opening quarter. Wilcox then closed out the period on an 11-4 scoring run to take a 22-15 lead into the second quarter.

Jordan Brown led the Patriots in first quarter scoring with eight points, including a pair of three point shots, and Desmond Tisdol put in six in the period. Azavion Deans, Cameron Patterson, Keyshawn Howard and Demetric Young combined for the remaining points for Wilcox in the first quarter. Javon Stanley accounted for eight of Irwin County’s first period points.

Second quarter action saw the Patriots extend their lead out as high as 10 points before Irwin put together a big run to tie the score at 32 apiece with less than three minutes until halftime.

The Patriots subsequently responded with a 10-2 scoring run over the remaining time in the first half.

Howard hit a three-pointer at the buzzer to cap off the run, and Wilcox had restored the lead to 42-34 entering halftime.

Tisdol and Brown each put in six points for the Patriots in the second quarter, while Howard scored five and Young accounted for three.

Irwin went on to outscore the Patriots 20-19 during the third quarter.

The Patriots built their lead up to 12 points at one point late in the period, but Irwin countered with a 5-0 run to finish off the frame, leaving Wilcox ahead 61-54 going into the final period.

Howard, Brown, Tisdol and Patterson all had crucial scores in the period for Wilcox, while Stanley helped keep Irwin within striking distance of the Patriot lead with 11 points.

The Indians then took control of the momentum with a 12-4 scoring run to start the fourth quarter, leaving the Patriots trailing by a point at 66-65 at the 4:50 mark of the period.

Over the next two minutes of gameplay, Tisdol and Patterson combined for six points to get the Patriots back ahead at 71-66 with three minutes and 40 seconds remaining.

Irwin responded with an important three-pointer, followed by a pair of free throws from Stanley to bring the sides level at 71 each with 2:40 to play.

Young subsequently hit a free throw, and Tisdol followed up with a layup after an offensive rebound to put Wilcox ahead 74-71 with just under two minutes to play, but Irwin ended the game on a 9-0 scoring run from there to come up with the win.

Jamorri Colson and Garland Benyard made the key shots down the stretch for Irwin, and Stanley knocked down some crucial free throws to finish the game off for the 80-74 Irwin County comeback victory.

Tisdol finished the game with a total of 24 points to lead the Patriots in scoring on the night, and Brown had 20.

Stanley led all scorers in the contest with a total of 32 points.

The state tournament quarterfinal defeat to Irwin left the Patriots with a final record of 22-4 on the season. This season was the third in a row in which the Wilcox County boys’ varsity basketball team has ended up with 20 or more wins. 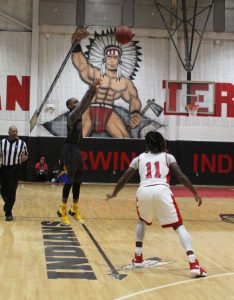 Wilcox County point guard Jordan Brown pulls up for a long range three-point shot during Wednesday night’s playoff game against Irwin County. The result of the attempt was a successful three-point basket. 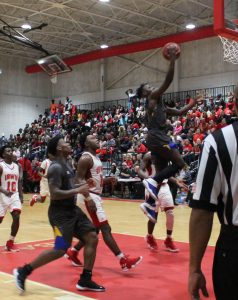 Wilcox County’s Cameron Patterson drives to the basket for a layup during Wednesday night’s playoff game. 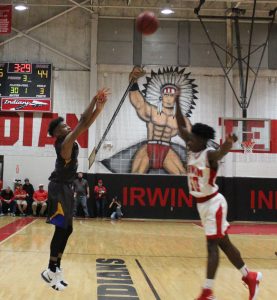