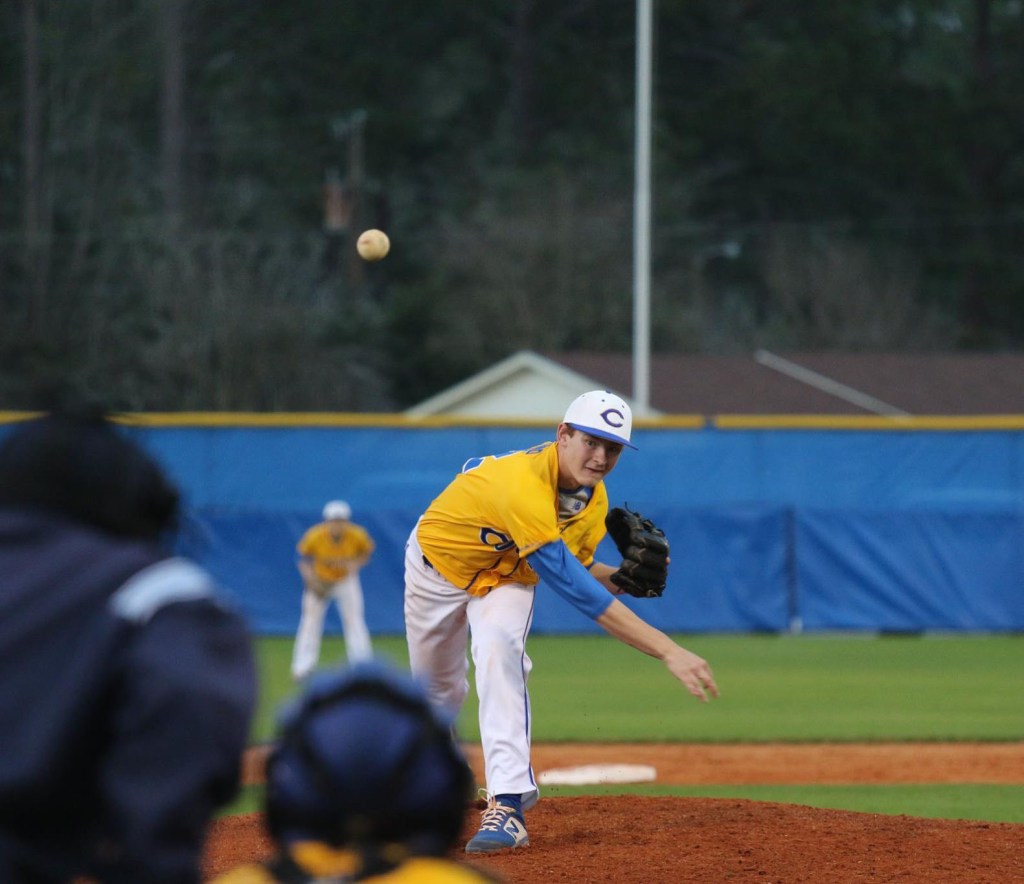 CORDELE— Crisp County High School’s baseball team knocked off the Perry Panthers 1-0 on Friday night in Cordele to pick up their sixth win of the season.

Perry won the first contest between the two teams on their home field earlier this season by a score of 7-6 back in February, but the Cougars defended their home field as well by taking the victory in Friday night’s rematch.

Crisp starting pitcher Connor Richmond and Perry’s Jackson Nipper kept the opposing batting lineups in check for the majority of the night during the pitchers’ duel, but the Cougars pushed across the only run of the game in the bottom of the fifth on a sacrifice fly to pull out the win.

Perry had the first run-scoring threat of the game in the top of the second inning after starting the frame with a walk, followed by a single to right.

Richmond subsequently struck out the next batter for the first out of the inning, and he then started a double play on a comebacker to the mound. He fired to shortstop Noah Walters to begin the play, and Walters threw to Bailey Barfield at first to complete the double play and end the Panther second inning threat.

Neither team managed any run scoring opportunities from there up until the fifth inning.

Perry got a one-out single, followed by a walk in the top of the fifth inning to put the Cougars in a tough situation. A fielder’s choice groundout to third gave Perry two outs in the frame, but the next batter reached on an infield hit to load up the bases. Crisp Outfielder Cade Jolly then came up with a tough catch on a fly ball to left field for the third out of the inning to get the Cougars out of the jam.

Crisp third baseman Cole Lancaster took first base after being hit by a pitch to begin the bottom half of the fifth inning, and Walters came up next and attempted to move the runner into scoring position with a sacrifice bunt that led to a Perry throwing error, leaving Crisp with runners at second and third with no one out in the frame.

Toby Stripling subsequently reached first base for the Cougars after hitting the baseball off of home plate, which led to a high chopper that left the Panther infield with no play to make.

Following that, Jackson Napier came up to bat next and knocked in the game’s only run with a sacrifice fly to right field that sent Lancaster to home plate for a 1-0 Cougar lead in the fifth inning.

The Panthers got out of the inning allowing just the one run, but the score proved to be the only one Crisp County needed, as Richmond allowed just one Perry base runner on an infield hit over the final two innings.

Richmond finished the game off for the complete game shutout, pitching all seven innings and allowing just five hits and two walks while striking out five Perry batters.

Crisp County’s batting lineup had two hits on the night, one by Stripling and the other by Lancaster.

Crisp ran their overall record to 6-3 with the win over Perry.

The Cougars are scheduled to play three games this week, starting with a matchup at Southland Academy this afternoon at 4 p.m. Crisp will then play at Tiftarea Academy on Tuesday at 6, and they will close out the week with a home game against Hawkinsville High School on Friday night at 6.