The Crisp County Middle School soccer teams hosted Worth County on Monday afternoon, and both Cougar teams came up with the wins.

The CCMS Lady Cougars defeated Worth by a final score of 5-0, with three goals scored by Emily Garcia, and one apiece from Sydney Young and Hannah Hamilton.

The CCMS boys defeated Worth 3-1 on the day. Crisp goal scorers in the game were Lupe Acevedo, Evan Smith, and Reyes Ortega on a penalty kick.

The CCHS JV teams were also in action on Monday with games versus Fitzgerald. The Cougar teams were both defeated by Fitzgerald on the night, 5-0 in the girls’ game and 4-2 in the boys’ contest. Juan Diaz and Adonis Hooks each scored a goal for Crisp in the defeat.

The Crisp County High School varsity soccer teams played on the road against the Sherwood Christian Academy Eagles in Albany on Tuesday night. Sherwood came up with the win over Crisp in both matches.

The Lady Cougars fell to Sherwood 1-0 on the night. After several scoring opportunities and one questionable no call that went against Crisp, the score was 0-0 at the half. The scoreless tie was broken when Sherwood converted on a penalty kick in the second half. The Crisp girls battled to the end but couldn’t overcome the deficit and fell by the final score of 1-0.

The Sherwood Eagles later defeated the Crisp County boys by a final score of 6-1 on the night.

In a game dominated by Sherwood possession, Crisp was able to keep it close in the first half trailing 2-0. Sherwood opened up the scoring in the second half and later took a commanding 5-0 lead before Crisp avoided the shutout with a goal scored by CJ Daniels. Sherwood added a late goal to make the final score for the match 6-1.

The Lady Cougars had a 5-3 record on the season following Tuesday night’s defeat against Sherwood, while the boys had a 3-4-1 (Win-Loss-Tie) record following their defeat to SCA.

In CCHS JV action on Wednesday, the Lady Cougars fell to Lowndes 5-0, while the Cougar JV boys’ team also dropped their match to Lowndes 3-1. Lupe Acevedo scored Crisp’s only goal in the defeat.

The CCMS teams played home games against Fitzgerald on Wednesday evening, and Fitzgerald came up with the win in both contests, 7-0 in the girls’ match and 6-1 in the boys’ game. Sawyer McGinnis scored from a corner kick by Evan Smith for the only Crisp County Middle School goal of the day.

Crisp County’s middle school teams will play their next games on Monday at home against Lee West starting at 4:30 p.m. 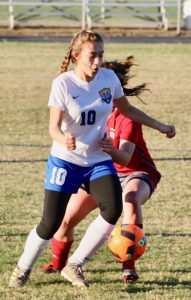 Crisp County High School’s Madison Waters fights off an opponent for control of the ball during a recent CCHS soccer match. 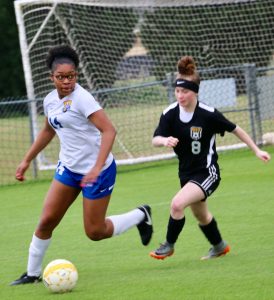 Crisp County’s Kaya Daniels controls possession of the ball for the Lady Cougars as she holds off an opposing player during recent CCHS soccer action. 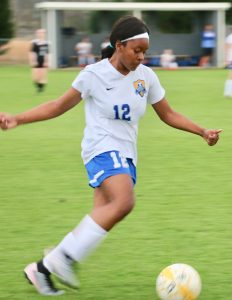