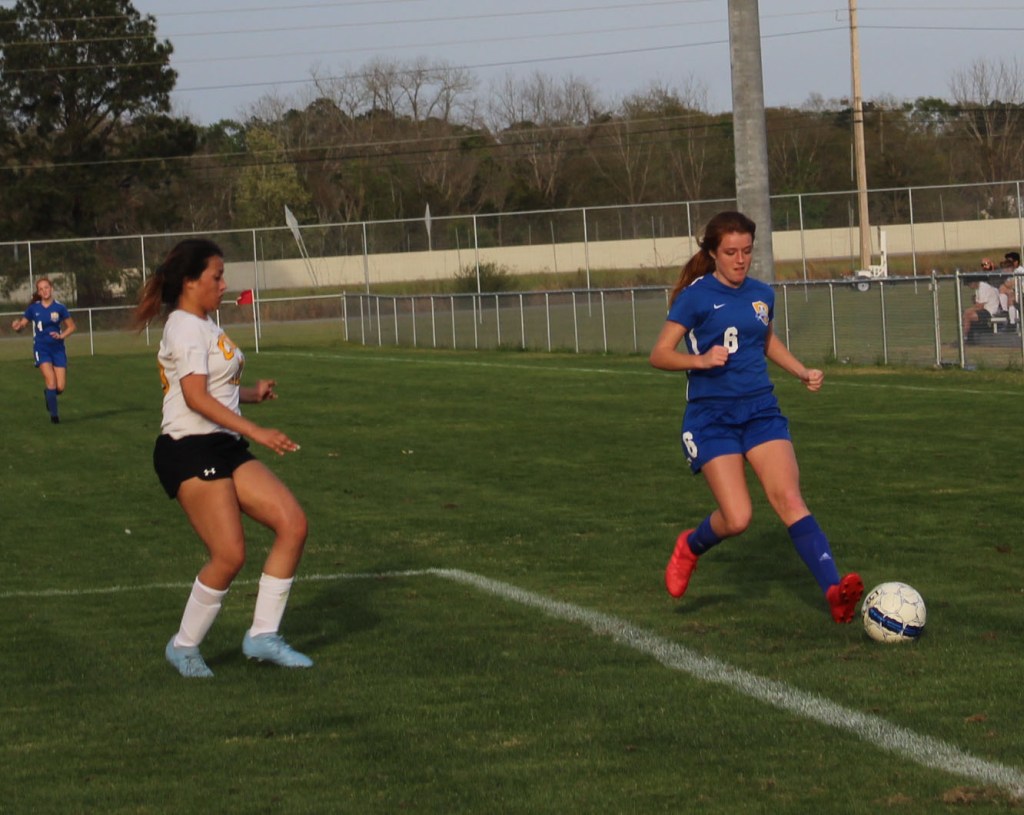 Crisp County’s Haley Kendrick (6) dribbles up the field during an attacking move for the Lady Cougars as a Cook County player defends. The Lady Cougars defeated Cook in Wednesday night’s game 5-0.

Crisp’s girls varsity team defeated Monroe High on Tuesday by a score of 10-0, while the Crisp boys’ team took the win in their match by an 8-2 final score line.

Following Tuesday’s results, the Lady Cougars defeated Cook County on Wednesday evening by a score of 5-0, and the Crisp County boys knocked off the Cook Hornets 1-0 later on in the night.

The Lady Cougars came out and started the scoring early in Tuesday night’s match and never let up. Crisp County controlled the game from the starting whistle and dominated the entire game, according to Coach Michael McGinnis.

The Lady Cougars got three goals from Madison Waters, two goals from Maddi Hughes, two from Kirin Webb, two from Anahi Garcia, and one goal from Peyton Bozeman. Hughes led the team in assists for the match with three total, while Waters and Bozeman also each finished with an assist on the final stat sheet.

The dominant performance from the Lady Cougars led to an easy 10-0 region victory.

Later on in the night, the Crisp County boys’ team also cruised past Monroe High for a region win.

The Cougars watched the big offensive output from the girls’ team and decided that they also wanted to score a lot of goals.

Crisp got two goals from Elijah Reynolds and Jordan Fawkes. They also got a goal apiece from Logan Boutwell, CJ Daniels, Kevin Richmond, and Diego Alvarez. Davin Fryman, Richmond, and Alvarez each had an assist in the contest. After it was all said and done, the Cougars secured an 8-2 win.

In more region 1-AAA action, the Lady Cougars were taking on the Cook County Lady Hornets on Wednesday night.

The Lady Cougars came out aggressive and got early goals from Waters, Webb, and Haley Kendrick to take a 3-0 lead into halftime.

The second half was much like the first, as Crisp was able to keep possession of the ball and control the game. During the second half, Hughes added two more goals and the Lady Cougars cruised to a 5-0 victory.

With the two region wins this week, the Lady Cougars now have an overall record of 8-3, with a 6-0 mark in region play. The unbeaten record in region play to this point has Crisp’s girls in first place in the 1-AAA standings with three region matches remaining on their schedule.

In the late game on Wednesday, the Cougars were settling in for a dogfight between two of the top ranked teams in the region. The teams went back and forth for the entire first half and the game was tied 0-0 at halftime.

In the second half the Cougars came out attacking and Reynolds scored a brilliant goal on a great assist from Richmond to give the Crisp County the 1-0 lead. Crisp continued the attacking play from there but missed on several late scoring opportunities, before securing the 1-0 victory.

The two region victories this week put the Crisp County boys’ team at 6-4-1 (Win-Loss-Tie) overall on the season, and 5-1 in region play. The Cougars are also sitting in first place in the 1-AAA standings with just three region contests to go this season.

The Crisp County varsity teams will take a break from the region schedule for their next few games. The Cougar teams will travel to play Lee County on Tuesday starting at 5:30 p.m., and following that they play home games on Friday night against Dodge County.

The CCMS Lady Cougars’ game versus Lee East was tied at the end of regulation at 0-0, so a penalty shootout was necessary to decide a winner.

After a Crisp County missed shot, Lee East converted their final attempt to claim the victory.

The CCMS boys fell to Lee East later on in the day 2-0.

On Wednesday, CCMS played road games against Lee County West. The teams from Lee County took both of the wins on the day.

The Lady Cougars fell behind early in the contest after Lee County West put the first few goals on the scoreboard.

Blakely Young scored the only CCMS goal in the contest. Lee won by the final score of 5-1.

Lupe Acevedo scored the only Crisp County goal of the game. Lee defeated the Cougars in a penalty shootout following a 1-1 result at the end of regulation time.

The CCMS Cougar teams will play games this coming Monday afternoon at home against Fitzgerald beginning at 4:30 p.m. 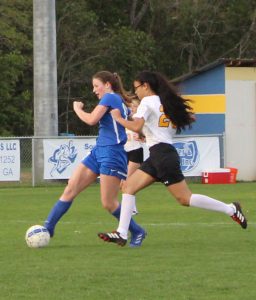 Crisp County’s Maddi Hughes dribbles her way past a Cook County defender and prepares to attempt a shot during Wednesday’s 5-0 Lady Cougar win.