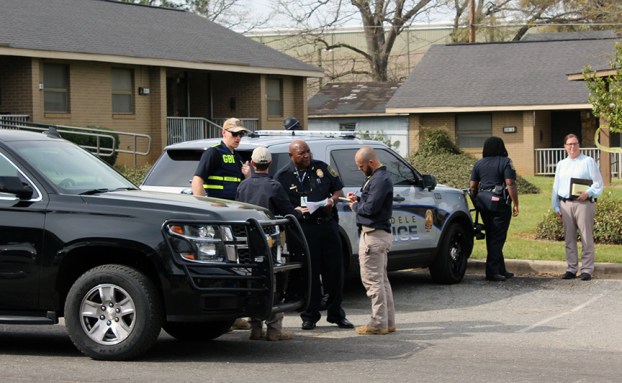 Cordele Police Chief Lewis Green (center) consults with agents with the Georgia Bureau of Investigation on the scene of a death investigation at the apartment block located at 310 West 14th Avenue at approximately 4:15 p.m. on Monday.

Investigators with the Cordele Police Department are currently working a death investigation at the Cordele Housing Authority apartments located at 310 W. 14th Avenue. Multiple units are on the scene at this time (4:35 p.m. on Monday), including agents with the Georgia Bureau of Investigation.

Foul play has not been ruled out, but it has not been confirmed at this time. CPD Captain Andrew Roufs said the investigation is “rapidly evolving” and they have one person in custody for questioning about the death.

Officers were dispatched to the address sometime around 3 p.m. Monday in reference to a disturbance. Roufs said the disturbance was ongoing when units arrived, adding that the incident was not a random crime and everyone involved were previously acquainted.

This is a breaking news story. Check back later for more information as it develops or read all about it in Wednesday’s print edition of the Dispatch.