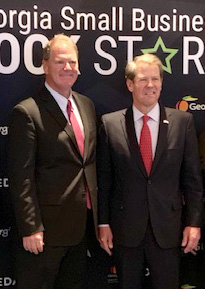 Local business Southern Fiber Worx was honored as one of the state’s four Small Business Rock Stars at a luncheon hosted on Monday by the Georgia Department of Economic Development’s Entrepreneur and Small Business program.

Southern Fiber Worx is owned and operated by Cordele businessman Greg Turton. The company, which employs six, has been an example of innovation in the information technology field, providing high-speed fiber-optic internet service to residences and businesses throughout Crisp County. Turton and his team were honored by the Cordele-Crisp Chamber of Commerce as one of the city’s businesses of the year at its recent annual banquet.

“As a small business owner for over thirty years, I am thrilled to declare March 18-22 Small Business Week in Georgia,” said Governor Brian Kemp, who was at Monday’s luncheon. “Georgia’s small businesses are the driving force behind our successful economy and create jobs across our state – no matter the zip code. Congratulations to the 2019 Small Business ROCK STARS on your achievements, and thank you for calling Georgia home.”