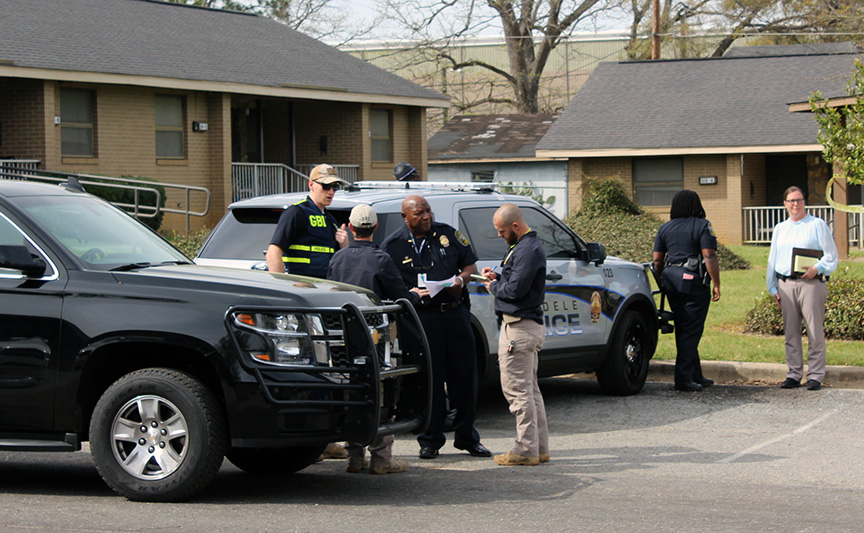 Cordele Police Chief Lewis Green (center) consults with agents with the Georgia Bureau of Investigation on the scene of a death investigation at the apartment block located at 310 West 14th Avenue at approximately 4:15 p.m. on Monday.

FROM A CORDELE POLICE DEPARTMENT EMAIL ISSUED AT NOON TUESDAY:

“The victim’s name is Bobby Holt, 57 year old Cordele native.  No suspect information is being released yet due to further canvassing and investigation.  [The Cordele Police Department] anticipate[s] giving name(s) by 5:00pm today.  The only additional information [CPD] can advise is that all person’s involved appear to know each other and this doesn’t appear to be a random  act of violence.”

Two subjects have been arrested in connection with a homicide that occurred at approximately 2:40 p.m Monday at 310B West 14th Avenue. The crime scene is still active, and the names of the victim and the two subjects have not yet been released by authorities.

Captain Andrew Roufs with the Cordele Police Department said on the scene that the investigation was “rapidly evolving.” The initial 911 call reported a disturbance at the apartment block, and the disturbance was ongoing when officers arrived. In a press release, Roufs said, “Quick response by officers led to the arrest of two suspects believed to be involved.”

No other information about the homicide has been released at this time. Cordele Police want to inform the public that there does not appear to be any further risk to public safety, but because the crime scene is still actively being processed by law enforcement agents, they ask that the public avoid the area.