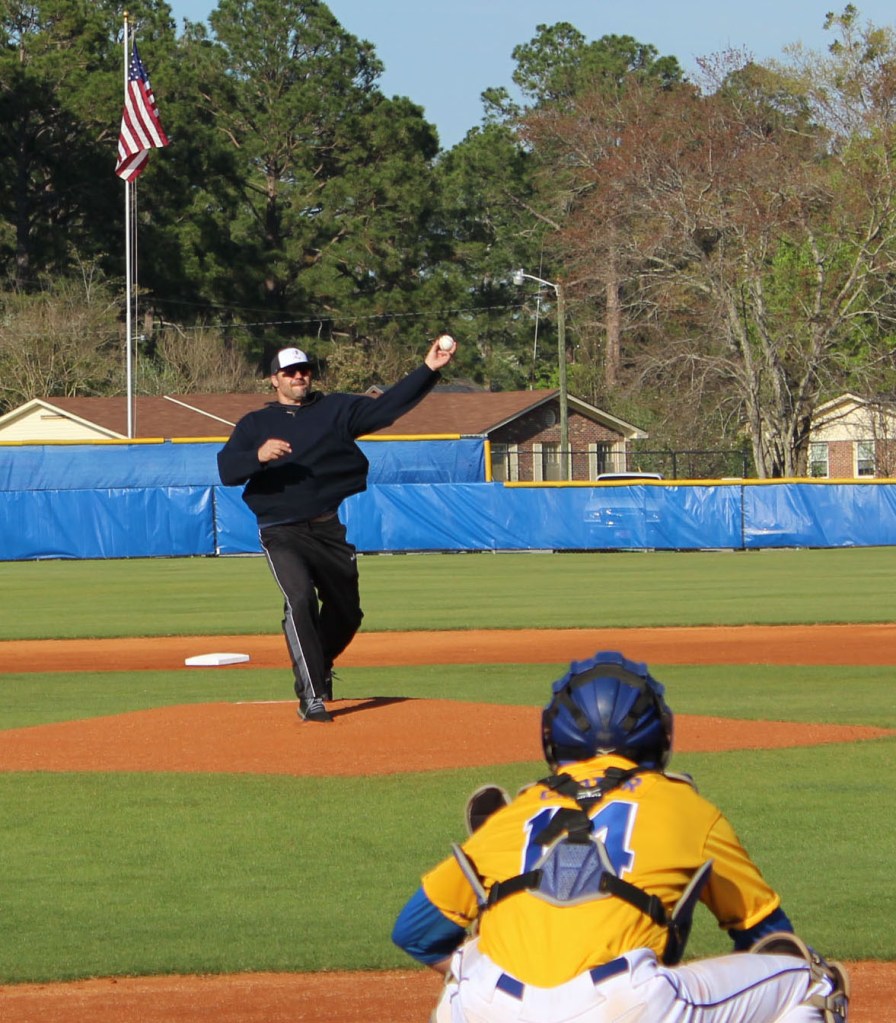 Pictured: Former Atlanta Brave Ryan Klesko throws out the first pitch to Crisp County catcher Jack Carter at Tuesday night's CCHS baseball cancer awareness game versus the Worth County Rams. Crisp fell to Worth in the game by a final score of 15-1.

Former Atlanta Brave Ryan Klesko threw out the first pitch to cap off the pregame activities, and after he delivered a strike to the plate, the Cougars and the Rams took the field for their first region competition of the 2019 baseball schedule.

After a very competitive first five innings of play, the Worth County Rams used an 11-run top of the sixth inning to leave Cordele with a 15-1 win.

Worth scored the first three runs of the game in the top of the opening inning using three hits, one walk, and a hit by pitch. The Rams saw a chance for a fourth run of the frame cut down at the plate when Crisp catcher Jack Carter received a relay throw and tagged an advancing base runner out, but Worth County took a 3-0 lead into the bottom half of the inning.

The Cougars loaded up the bases with one out in the bottom of the first after a walk by Jackson Napier, a single from Bailey Barfield, and then an error at short that allowed Connor Richmond to reach, but the Rams got out of the jam to keep CCHS off the scoreboard in the first frame.

The Cougars got their only run of the game in the bottom of the third inning when Barfield hit a one-out RBI double to right center that allowed Napier to make his way around the bases from first. Worth was ahead by a score of 3-1 after three innings of play.

The Rams subsequently pulled back in front by three with one run in the top half of the fifth for a 4-1 lead.

After a scoreless fifth frame, the Rams used six hits and some Cougar defensive errors to pile on 11 runs in the top of the sixth for a 15-1 win.

Offensive leaders for the Cougars in the contest: Barfield- two hits and one RBI; Napier- one hit, one walk, and one run scored; Noah Walters- one hit; Toby Stripling- one walk.

Richmond got the start on the mound for CCHS and went five innings, allowing just four earned runs on six hits and three walks. Relief pitcher Alex Kelley pitched a scoreless inning for the Cougars later on in the contest.

With the defeat, the Cougars fell to 9-8 on the season and 0-1 in region play. Crisp and Worth will matchup again later this week with a double-header in Sylvester on Friday starting at 4:30 p.m.