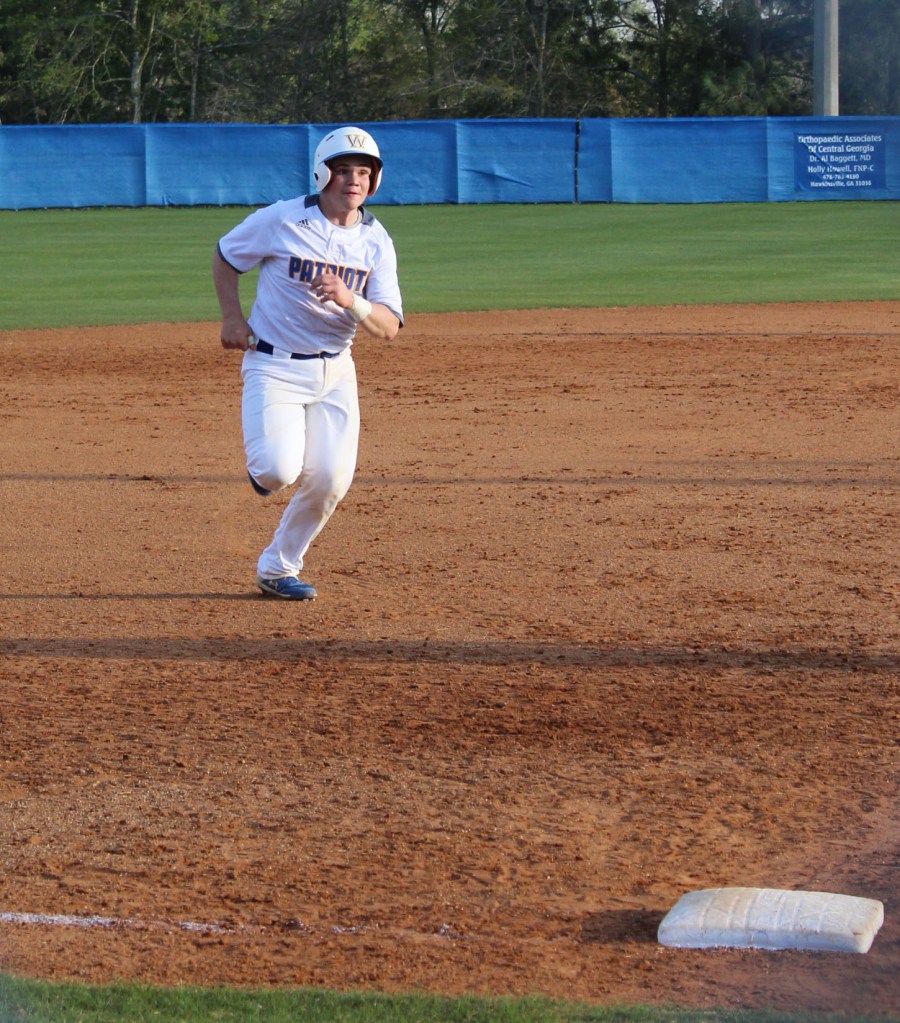 Wilcox County’s Rhett Davis approaches third as he makes his way around the bases during the fourth inning of Thursday’s game against Pelham. He scored a run on the play after an RBI double from teammate Clark Gaines.

The Wilcox County High School baseball team split a pair of games during this week’s schedule to bring their overall record to 3-6 (2-5 in region competition) on the season.

The first game was a region contest on Tuesday night, in which Wilcox went on the road and defeated Echols County by a score of 11-3. The Patriots then dropped a high scoring non-region game against the Pelham Hornets by a final score of 20-14 on Thursday night in Rochelle.

Wilcox County picked up their second region 2-A win of the season with an 11-3 road win at Echols County on Tuesday evening.

The Patriots scored the first run of the contest in the top of the second inning when Cameron Patterson hit an RBI-single that scored Lagan Luke.

Wilcox then added to the lead in the top of the third after an RBI hit from Branson Owens that sent Cameron Coleman to the plate, followed by a Desmond Tisdol sacrifice fly that sent Owens home.

Echols County got on the scoreboard with a run in the bottom half of the third frame, but the Patriots were in front 3-1 after three innings played.

Wilcox scored a run in the top half of the fourth frame on an RBI groundout from Patterson, but Echols responded with a pair of runs in the bottom half to make the score 4-3 in favor of the Patriots heading into the fifth inning.

The Patriots followed up with a four-run top of the fifth to take an 8-3 lead. Coleman started the frame with a hit, Owens followed by reaching base after being hit by a pitch, and Clark Gaines subsequently walked to load up the bases with no outs. Luke, Brock White, and Bo Keene each had RBI hits later on in the frame to put the Patriots up 7-3, and Patterson knocked in the final score of the inning with an RBI groundout for the eighth Wilcox run of the game.

After a scoreless sixth frame, the Patriots put the finishing touches on the win by piling on three more runs in the top half of the seventh. Owens provided those runs with a three-RBI double that scored Luke, Patterson, and Coleman. The seventh inning scoring output left the Patriots with an 11-3 win after Gaines pitched a scoreless bottom half of the frame.

Rhett Davis started the game for the Patriots and picked up the win after pitching four innings, in which he allowed three runs (one earned run) on no hits and two walks while striking out four Echols County batters. Gaines pitched the final three innings for Wilcox and allowed just one hit while walking two batters and striking out two.

In Thursday night’s game, Pelham appeared to be in complete control of the contest, as they led by a score of 9-0 after the top of the second inning, but the Patriots scored 10 unanswered runs over the next three frames to grab a 10-9 lead.

Wilcox scored three runs in the bottom of the second to cut the early Pelham lead to 9-3. After Gaines and White each reached base to start the frame, Tisdol got the Patriots on the scoreboard with an RBI single to left field. White and Tisdol later scored on Pelham errors for the other two runs of the frame.

Wilcox subsequently cut the Hornet lead down to 9-5 with a pair of scores in the third inning. Coleman, Owens, and Gaines all reached early in the frame to load up the bases with no outs. Tisdol followed with a one-out sacrifice fly that scored Coleman, and Luke then hit a two-out RBI single to score Owens.

Wilcox kept the momentum rolling with a five-run fourth inning that saw the Patriots take their first lead of the day at 10-9. Patterson led off by reaching base on an error, and Davis followed up with a base hit to left.

After Pelham picked up the first two outs of the frame, Gaines hit a two-run double to left to make the score 9-7. White chased Gaines home with an RBI single in the next at bat, and Tisdol subsequently hit a two-run home run to deep left field for the 10-9 Patriot advantage after four innings played.

Pelham responded with a five-run inning of their own in the top of the fifth to retake the lead at 14-10.

Wilcox pushed two more runs of their own across in the bottom half of the fifth by way of an RBI single from Davis and a sacrifice fly from Owens. The Patriots trailed by a score of 14-12 at the end of the fifth inning.

After a scoreless sixth inning, the Hornets scored their final six runs of the day to go in front by a score of 20-12 entering the bottom of the seventh.

Wilcox added two more runs to their total in the seventh inning on another RBI hit from Tisdol, followed by an RBI single from Luke. Those two Wilcox runs brought the final score on the night to 20-14 in favor of Pelham.

2. Coleman- one walk and one run scored

3. Owens- one RBI and one run scored

Wilcox is scheduled to play a region contest at Charlton County tonight starting at 6 p.m., and the Patriots will next be in action on Tuesday night at home against Irwin County with first pitch set for 6. 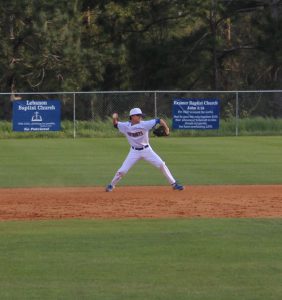 Wilcox County second baseman Cameron Coleman prepares to make a throw to first after fielding a groundball during the Patriots’ 20-14 defeat vs Pelham on Thursday evening. 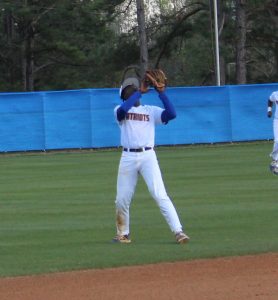 Wilcox County shortstop Cameron Patterson settles under a pop fly during Thursday’s game versus Pelham. He secured the ball for an out on the play.