The Wilcox County Middle School baseball team defeated Lanier County Middle School by a score of 12-2 in Rochelle on Friday evening to win the area conference championship. The WCMS Patriots ended the season with an unbeaten record of 19-0 and outscored their opponents this season by a run total of 256-13. 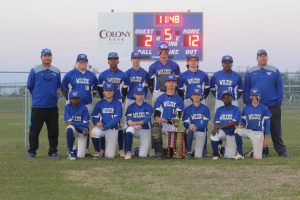 The Wilcox County High School baseball team fell to tough region 2-A rivals over their past two contests. The Patriots went on the road on Friday evening for a game against a tough Charlton County squad (11-5, 6-2 in region). The hosts defeated the Patriots on the night by a final score of 13-3.

Following Friday’s contest, the Patriots dropped a home game against Irwin County (10-8, 8-2 in region 2-A play) by a final score of 10-4 to leave Wilcox with a record of 3-8 overall, and 2-7 in region competition at this point in the season.

In Friday night’s game, the Patriots trailed 10-0 at the end of the third inning and went on to score their three runs in the top of the fourth inning.

Clark Gaines reached base for the Patriots in the top of the fourth after drawing a one-out walk. After Charlton recorded the second out of the frame, Desmond Tisdol picked up a base hit and Lagan Luke followed up by reaching on an error from the hosts, leaving Wilcox with the bases loaded.

Bo Keene subsequently knocked in the first Wilcox run of the game with an RBI single that scored Gaines. Tisdol and Luke both scored shortly after on errors by Charlton County.

The Patriots trailed by a score of 10-3 after the top half of the fourth, and Charlton went on to score three more runs in the next couple of frames to defeat Wilcox 13-3 after five innings of play.

The visiting Irwin County Indians scored the first three runs of Tuesday night’s game in the first two innings, but the Patriots countered with three runs in the bottom half of the second to tie the score at 3-3 entering the third inning.

Tisdol led off the bottom of the second with a base hit and scored shortly after on an Irwin County error. Luke drew a walk later on in the frame, and a one-out RBI double from Patterson subsequently plated the second Patriot run of the contest. Patterson then scored on an Irwin error to even the score up at 3-3.

Irwin County went on to score seven unanswered runs over the next four innings to take a 10-3 lead.

Wilcox put the final run of the contest on the board in the bottom of the seventh on an RBI single from Brock White that scored Branson Owens. The last Patriot run of the game left the final score line at 10-4 in favor of Irwin.

White and Tisdol led the Wilcox batting lineup on the night with two hits apiece.

Crisp Academy’s baseball team split a pair of GISA region 3-AA contests earlier this week. CA fell on the road at Southwest Georgia Academy 5-4 on Monday, and they followed that up with an 18-4 win over Westwood at home on Tuesday afternoon.

Crisp Academy and SGA matched up in Damscus on Monday afternoon for their second of three crucial GISA region 3-AA contests this season. The SGA Warriors came out on top in the contest by a final score of 5-4 to even up the season series between the two teams.

After a scoreless pair of innings to start the contest, the two teams put their first runs of the game on the board during the third frame. The CA third inning run came by way of an RBI triple from Dylan Farmer that scored Zach Chalon.

SGA tied the score up at 1-1 in the bottom half using a pair of base hits, and the Warriors later scored one run in the fourth inning, and three more in the fifth to take a 5-1 lead after five innings of play.

The Wildcats put two runs on the board in the top half of the sixth inning to cut the SGA lead to two runs. Baylor Pless led off the frame with a single for CA and Griffin Gravitt subsequently drew a walk. An SGA wild pitch moved both runners up a base, and Garrett Gravitt knocked in the second CA run of the day with an RBI groundout. Spencer Stubbs followed up with an RBI single for the third Wildcat run of the day. CA trailed 5-3 entering the bottom of the sixth.

In Tuesday’s game, Crisp jumped out to an 11-0 lead after three innings of play. After Westwood scored four runs in the top of the fourth, Crisp piled on seven runs in the bottom half for the final score of 18-4.

CA put four runs on the board in the first inning thanks on a pair of Westwood errors, plus three walks, one hit, and an RBI groundout from Griffin Gravitt.

Crisp tacked on two runs in the bottom of the second when Pless hit an RBI single and then scored on an error.

Crisp Academy scored five runs in the third inning on a two-run triple from Stubbs, a two-run single by Garrett Gravitt, and an RBI hit by pitch from Griffin Gravitt.

Fourth inning run scoring plays for CA were as follows: Floyd scored on a wild pitch, an RBI groundout by Hubbard sent Jacob Odom to home plate, Chalon scored on a wild pitch, a Griffin Gravitt RBI double sent Farmer and Pless home, a Reid McCard RBI single scored the next run, and for the final run of the game, a sacrifice fly from Floyd plated McCard. The seven-run inning brought the final score line to 18-4.

CA brought their record to 6-3 overall on the season and 5-3 in region competition with the results from this week. Crisp Academy is currently at second place in the GISA region 3-AA baseball standings.

The next game on the Crisp Academy schedule is on April 9 on the road at region leading Terrell Academy.

Crisp County’s varsity baseball team dropped a home game on Tuesday night against the Schley County Wildcats (15-1) by a final score of 10-0.

Schley maintained the 2-0 lead over the next couple of innings, before pulling away with eight runs in the top half of the fifth for a run-rule shortened 10-0 win over the Cougars after five innings played.

Bailey Barfield pitched four innings in the contest for the Cougars and allowed four earned runs while striking out one batter. He also recorded the only Crisp County hit of the day.

The defeat versus Schley put the Cougars at 9-11 on the season.

The Cougars will then play a home game against Tiftarea Academy (11-1) on the following night, before getting back into the region schedule with a contest at Cook County (10-8) on April 9.