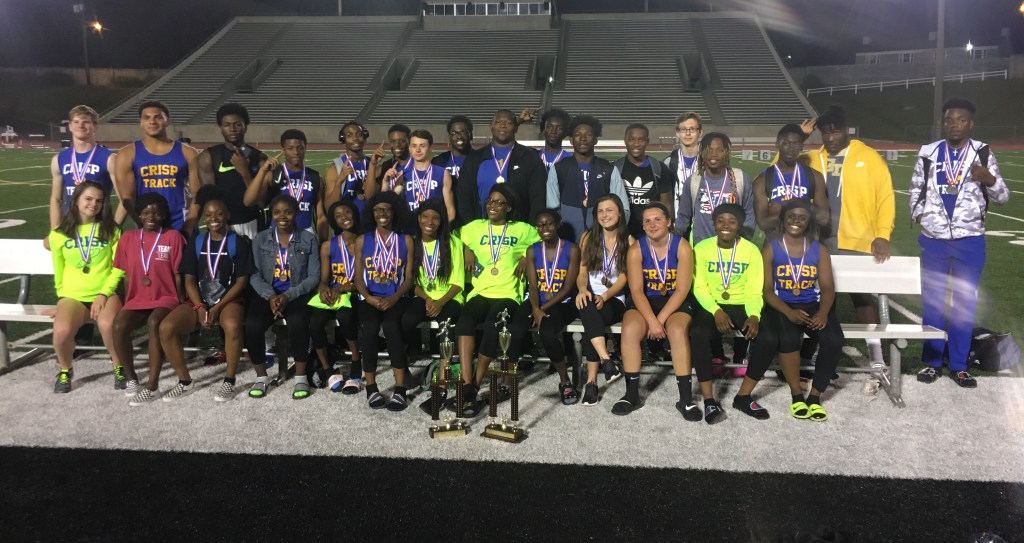 The Crisp County High School track teams are pictured together with their trophies and medals after the conclusion of last Thursday’s region 1-AAA meet at Hugh Mills Stadium in Albany. The CCHS boys’ team took the region championship, while the Lady Cougars took second place in the girls’ standings.

Last week’s region 1-AAA track meet at Hugh Mills Stadium in Albany was a productive one for the Crisp County High School teams.

The Crisp track teams competed on Thursday of last week against Monroe, Cook County, and Worth County, and the Cougars took home the region 1-AAA title in the boys’ competition, while the Lady Cougars finished as 1-AAA runners-up.

Overall the Cougars took region titles in several individual events and also had a strong contingent of athletes qualify for next month’s sectionals by finishing in the top four in their respective event(s).

“These kids have really pushed through the meat of the season to get to this point,” said Crisp County High School track Coach Marcus Gowan. “It is an extremely huge accomplishment for our kids, coaches, community and school to bring home the region championship for the boys and the region runner-up for the girls. We had eight region champions in individual events and I believe seven region runners-up.”

The Crisp County track teams will compete at sectionals at Pace Academy in Atlanta on Saturday, May 4 with state qualifying spots on the line.

“We are excited about the sectional meet next Saturday at Pace Academy. Our kids are running fast at the right time of the year and we hope to run even faster at the sectionals,” said Gowan.