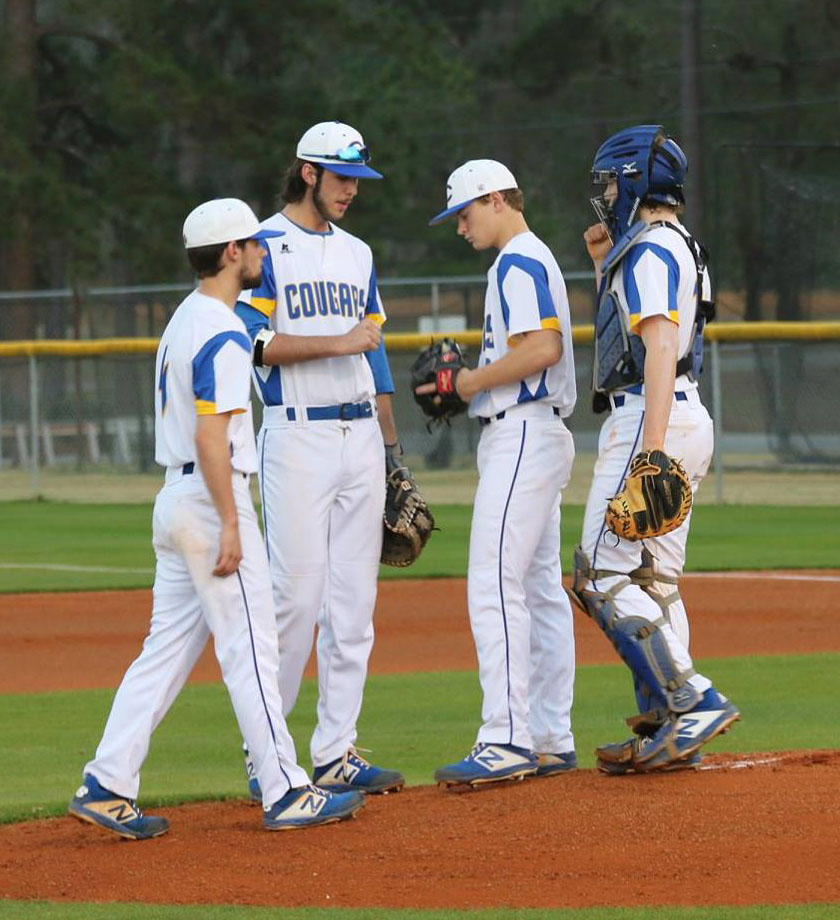 CCHS baseball players (left to right) Cole Lancaster, Bailey Barfield, Connor Richmond, and Jack Carter meet on the pitcher’s mound prior to the beginning of the next inning during a Cougar game from earlier this season. Crisp County is moving on to the second round of GHSA class AAA state playoffs after winning a first round series against Jackson High School on Wednesday. (Photo by Jessica Carter)

The Crisp County Cougar baseball team (15-15 overall record) is heading to the second round of the class AAA state playoffs after winning a best-of-three first round series at Jackson High School (22-6) on Wednesday.

CCHS got solid efforts from their pitching staff against Jackson in both games of the series, while the defense and batting lineup helped contribute to Cougar wins of 15-2 and 7-1 on the day.

The first inning of game one was scoreless, but the Cougars got two or more runs in each of the next five frames on their way to a 15-2 victory.

Cole Lancaster opened the scoring in the first game with a two run single in the top of the second inning that scored Noah Walters and Tanner Massey.

Following the second inning runs, Crisp jumped out to a 6-0 lead by scoring four runs in the top half of the third frame after racking up five hits. Walters, Connor Richmond, and Lancaster each had RBI hits during the inning to drive in the runs.

The Cougars then tacked on two more runs in the top of the fourth inning. Bailey Barfield hit a solo home run to right field for the first score of the frame, and Walters later scored on a wild pitch to put Crisp ahead by a score of 8-0 entering the bottom of the fourth.

Jackson High subsequently pushed across their only two runs of game one in the bottom half of the fourth inning using three walks, one hit by pitch, and one base hit, but Crisp was ahead 8-2 after four innings of play.

From there, Crisp piled on seven more runs over the course of the next two frames to take the 15-2 victory after six innings of play.

Two of those runs came during the top of the fifth inning on a fielder’s choice RBI groundout from Barfield, followed by an error that allowed Toby Stripling to score.

The Cougars pushed their final five runs of game one across the plate in the top of the sixth on six hits, including RBI triples from Barfield and Stripling, plus a run-scoring double from Walters and an RBI single by Jackson Napier.

Richmond pitched four innings for the Cougars in the game and allowed just two runs on two hits and three walks, while also striking out three batters. Jordan Grinnell pitched the final two frames for Crisp and struck out two batters.

Jackson High scored the first run of game two during the top of the first frame, but Crisp took the lead with a pair of second inning runs and then piled on four more scores in the third inning, followed by one more in the fifth for the 7-1 final score line.

Massey knocked in the two runs in the second inning on a double that scored Carter and Richmond.

Napier led off the bottom of the third frame with a double and later came around to score the third Cougar run of the game. Later on in the inning, Carter hit an RBI double before scoring on an error, and Stripling subsequently drew a bases loaded walk to put the Cougars up 6-1 going into the fourth inning.

Lancaster scored the final run of the series on a sacrifice fly from Napier during the bottom of the fifth inning to put the Cougars up by a score of 7-1.

Walters put in six innings on the mound for the Cougars in game two and allowed just the one Jackson run on five walks and two hits, while accumulating nine strikeouts. Grinnell pitched the final frame for Crisp and struck out one batter.

The Cougars will play a best-of-three series at Benedictine in Savannah in the second round of the state tournament. The series will start with a double-header next Thursday beginning at 1 p.m., with game three to be played on Friday if the teams split the first two contests. The Benedictine Cadets won last year’s class AA state championship, and have a record of 23-7-1 (W-L-T) so far this season.