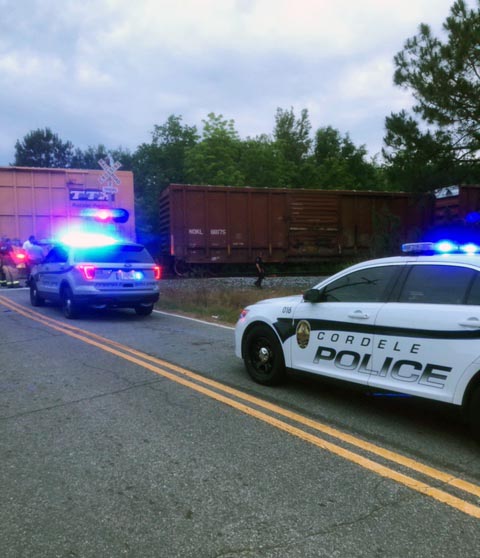 This photo provided by the Cordele Police Department shows units on the scene where a 17-year-old Cordele man was struck by a train near the crossing at Greer Street between LaPorte Drive and 13th Avenue. Crisp County High School student Dennis Hestle was struck near the location by a train at approximately 8 p.m. Thursday and died of his injuries some two and half hours later.

“Cordele police are investigating a train vs. pedestrian accident that occured today around 8:00 PM in the area of 13th Avenue and Greer Street. A CSX train was headed west when it came in contact with a subject allegedly on  or near the tracks.

“The pedestrian is in critical condition and was transported to Crisp Regional Hospital. His identification is still unknown at this time. Officers on scene advise the victim is approx. 16-19 year old african-american male.

“Chief Lewis Green states, ‘This is an unfortunate accident and we are working to determine what happened. We are also trying to identify this young man and contact his family as soon as possible.'”