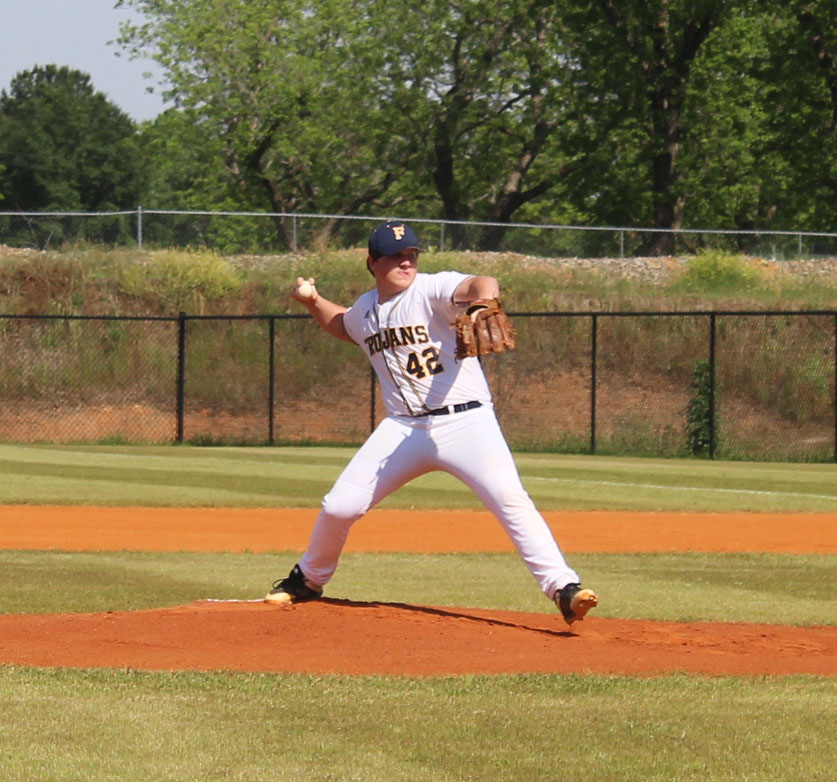 Fullington’s Carson Godfrey prepares to fire a pitch during a recent game.

The Fullington Academy Trojan baseball team (8-13 on the season) moved into the second round of the GICAA division 1-A state playoffs with a double-header sweep over David Emanuel Academy by scores of 2-1 and 8-4 on Monday afternoon in Pinehurst.

DEA took a 1-0 lead in the top of the first inning of game one, but that run would prove to be their only score of the contest, as Fullington starting pitcher Blake Worley did not allow another run over the remainder of the game.

Fullington scored their two runs in the bottom of the fifth when Josh Hendrix hit a two-run single to centerfield that scored Hunter Hughes and Brooks Hendrix.

The Trojans maintained the 2-1 advantage over the final two frames to hang on for the victory.

Worley earned the win on the mound after seven innings of work, in which he allowed just the one run on eight DEA hits while recording eight strikeouts.

Hughes led the Trojan offense in the game with three hits and one run scored. Josh Hendrix, Carson Godfrey and Shiloh Kehayes all had one hit during game one.

Game two featured more offense from both sides, but Fullington came out on top to finish off the series sweep.

The game was scoreless after two innings of play, but the Trojans scored at least one run in the final five frames. Their biggest scoring output came during the top of the seventh when they pushed across four runs to build an 8-2 lead. DEA tacked on two runs in the bottom half of the seventh to get back to within four runs of the Trojan lead, but Fullington pitcher Chase Smith got the final two outs of the game to eliminate any further threat of a comeback.

Godfrey started game two for the Trojans and pitched six innings and a third while allowing four runs on 11 hits and striking out five.

Hughes was again the catalyst for Fullington, with three hits, two RBIs, and two runs in game two. Jack McLeod finished game two with a pair of hits and three RBIs, while Avery Scarboro also added two hits plus an RBI.

The Trojans will play at Central Fellowship Friday in the second round of the GICAA state tournament at 2 p.m.