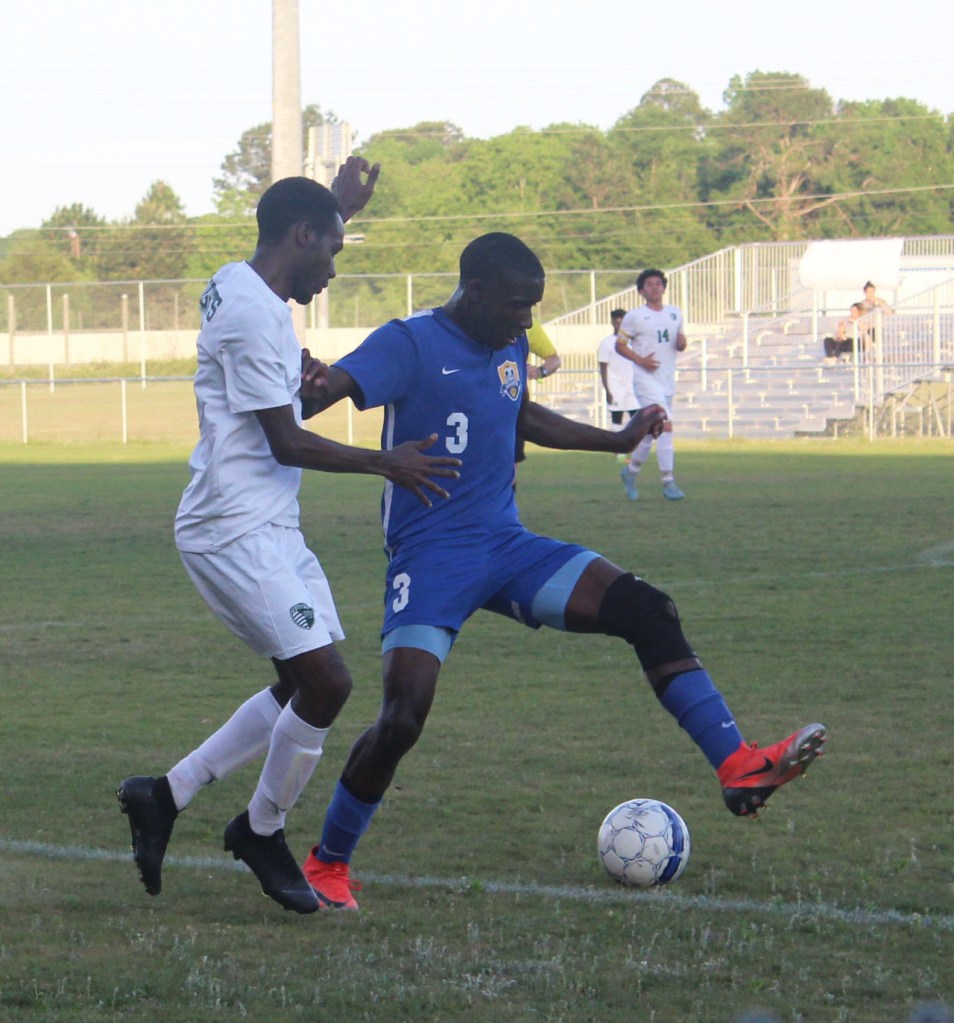 CCHS soccer player CJ Daniels (3) holds off an opposing player from Windsor Forest after winning possession of the ball during Thursday night’s class AAA state playoff game. The Cougars fell versus Windsor Forest by a final score of 1-0 on the night.

CORDELE – The Crisp County High School soccer teams both had their playoff runs come to an end in the second round of state with hard-fought defeats at home this week.

The CCHS Lady Cougars fell to Southeast Bulloch on Wednesday night in a penalty kick shootout after a 0-0 tie, and the Crisp boys fell to a strong Windsor Forest squad by a 1-0 final score on Thursday night.

Southeast Bulloch got out to a fast start with some early scoring opportunities in Wednesday night’s game, but the Lady Cougar defense was up to the task for the entire contest.

One notable scoring chance from Southeast Bulloch was a shot that hit off of the frame of the goal before falling into the arms of CCHS goalkeeper Peyton Bozeman near the seven minute mark of the first half.

The teams entered the halftime break still scoreless, and the game remained goalless over the course of the second half and overtime, so the contest was decided with a penalty kick shootout.

Southeast Bulloch ultimately came out on top 4-2 in the shootout after scoring on their first four attempts.

The playoff defeat left the Lady Cougars with a 13-7 final record on the season to go with their second consecutive region 1-AAA soccer title.

In Thursday night’s playoff match, Windsor Forest dominated possession of the ball and left Crisp County playing defense for most of the contest.

The Cougar defense held their own for the majority of the game, as they had an answer for every attacking move the visitors put together in the first half and early on in the second half. Cougar goalkeeper Jordan Fawkes also made some crucial saves to help keep Crisp in the game.

The visiting Knights finally broke the deadlock by scoring a goal with just under 15 minutes to play in the contest, and from there they kept the Cougars from finding an equalizing goal to hold on for the 1-0 win.

The defeat ended a great season for the Cougars, in which they posted a record of 10-9-1 (W-L-T) and matched the Lady Cougars with a region title to complete the 1-AAA soccer championship sweep for Crisp County.