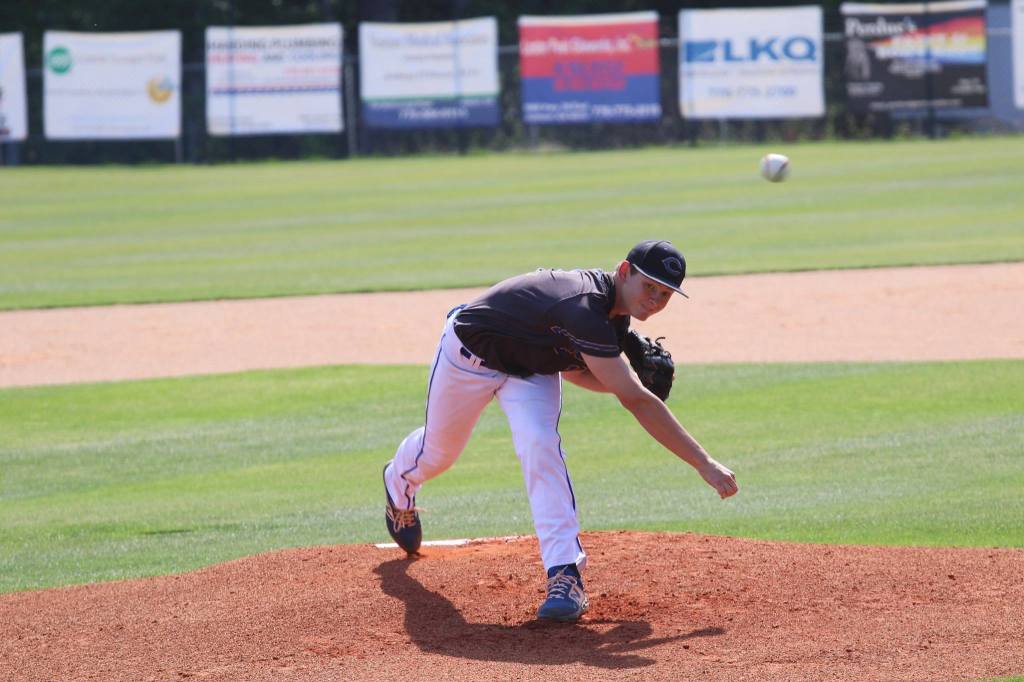 CCHS pitcher Connor Richmond releases a pitch during one of last week’s first round Cougar playoff wins over Jackson High School. Richmond helped lead the Cougars to a win in game two of this week's playoff series at Benedictine in Savannah.

The Crisp County High School baseball team will be playing in the class AAA state quarterfinals next week after defeating Benedictine Military School in the second round of the playoffs.

After falling to Benedictine 14-2 in game one of the best-of-three second round playoff series in Savannah on Thursday afternoon, the Cougars bounced back by winning the final two games by scores of 6-2 and 7-4.

The Benedictine Cadets took a commanding 5-0 lead in the first inning of game one on Thursday, and they later tacked on nine more runs over the course of the next three innings for their total of 14.

The Cougars scored their two runs in the top half of the fifth inning. Cole Lancaster accounted for the first Crisp County run after reaching base on a walk and subsequently scoring on a wild pitch. Toby Stripling scored the second Cougar run shortly after when Bailey Barfield drove him in with an RBI single.

Benedictine led 14-2 after the top of the fifth, so the first game of the series ended in a run-rule victory for the hosts.

In game two on Thursday, the Cougars fell behind 1-0 in the first inning, but starting pitcher Connor Richmond allowed just one more run to the Cadets over the remainder of the contest, while the Crisp offense accounted for six runs to spark CCHS to the victory.

The Cougars got on the scoreboard in the bottom of the second inning after Noah Walters scored on a Benedictine error. Walters had previously led off the frame with a walk and then made it to second base on a sacrifice bunt by Richmond, before stealing third and scoring on the error. The score was tied at 1-1 entering the third inning.

The Cadets jumped back in front 2-1 after an RBI single in the top of the fourth inning, but the Cougars responded with a four-run output in the bottom half of the frame to grab a 5-2 advantage going into the fifth.

Walters led off the bottom of the fourth with his second walk of the game, and Richmond subsequently hit a double to left field to give Crisp a pair of runners in scoring position. A passed ball during the next at-bat allowed Walters to score, and Richmond also scored shortly after to put the Cougars on top 3-2. Jackson Napier picked up an RBI single that scored Dallas Pheil later on in the frame, and Barfield hit a sacrifice fly that sent Lancaster h0me for the final run of the fourth frame.

Crisp pushed across the final run of game two in the bottom half of the sixth inning when Toby Stripling scored on an error.

Benedictine loaded up the bases with two outs in the top half of the seventh, but Jordan Grinnell entered the game in relief of Richmond and struck out the final batter to close down the contest and pick up the save.

Richmond pitched for six and two-thirds innings and allowed just one earned run on seven hits and seven walks while recording one strikeout.

Napier finished the contest with two hits, a stolen base, and an RBI to lead the Cougar batting lineup.

The Cougar win in game two set up the tiebreaking third game on Friday afternoon.

In game three, the two teams were tied at 4-4 after the top half of the fourth inning, but the Cougars scored the contest’s final three runs from there to take the win and clinch their spot in the third round.

CCHS pitchers Walters and Grinnell combined for seven innings of work on the mound in the game three victory.

Grinnell pitched for three and two-thirds innings and allowed four runs on seven hits and two walks, while also striking out two batters. Walters took the mound when the game was still tied at 4-4 and he pitched three innings and one-third of shutout baseball while giving up just two hits and striking out four batters to give the offense their chance to win the game. The Crisp defense also turned two key double plays in the contest to help out the cause.

Crisp trailed 1-0 after the first inning, but they tied the score up with a run in the bottom of the second. Walters scored the run after leading off the frame with a double before advancing to third on a wild pitch, and subsequently scoring on a passed ball.

A two-run home run from Benedictine’s Carter Holton gave the hosts the lead in the top of the third inning, but the Cougars responded with three runs in the bottom half to take their first lead of the day.

Crisp got consecutive hits from Stripling and Napier to open up the bottom half of the third, and a walk by Bailey Barfield loaded up the bases with no outs in the frame. Stripling subsequently scored the second Cougar run of the game on an RBI groundout from Jack Carter in the next at bat, and Walters then drew a one-out walk to load the bases once again. Richmond followed with a two-RBI single shortly after to put CCHS in front 4-3.

The hosts then tied the score with a run in the top of the fourth inning, but the Cougars grabbed a 6-4 lead with a pair of scores in the bottom half of the frame on an RBI hit from Walters, followed by a Benedictine error.

Crisp scored the final run of the game on a solo home run by Napier in the bottom of the sixth, and Walters pitched a perfect top half of the seventh to finish off the series win for the Cougars.

Napier led the CCHS batting lineup in game three with three hits (home run and two singles), a stolen base, and two runs scored. Walters had two hits in game three, while Richmond, Stripling, and Massey each had one apiece. Barfield drew two walks in the contest and scored twice.

With the two wins over Benedictine, the Cougars improved their overall record to 17-16 on the season, and they have now won seven of their last eight games.

Crisp County will continue their playoff run next week with a series at Pace Academy (21-6 overall record). The first two games of the third round series will be played on Wednesday as a double-header starting at 4:30 p.m., with game three set for Thursday at 5, if necessary. The games will be played at Pace Academy’s Riverview Sports Complex located at 5700 Riverview Road in Cobb County. 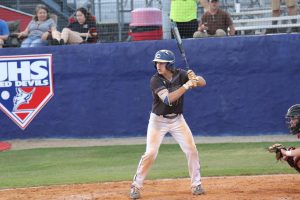 Crisp County High School’s Jack Carter awaits the next pitch during an at-bat in a playoff game last Wednesday at Jackson High School. 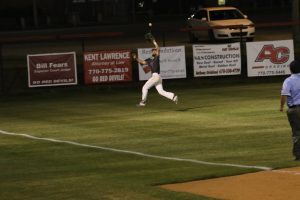