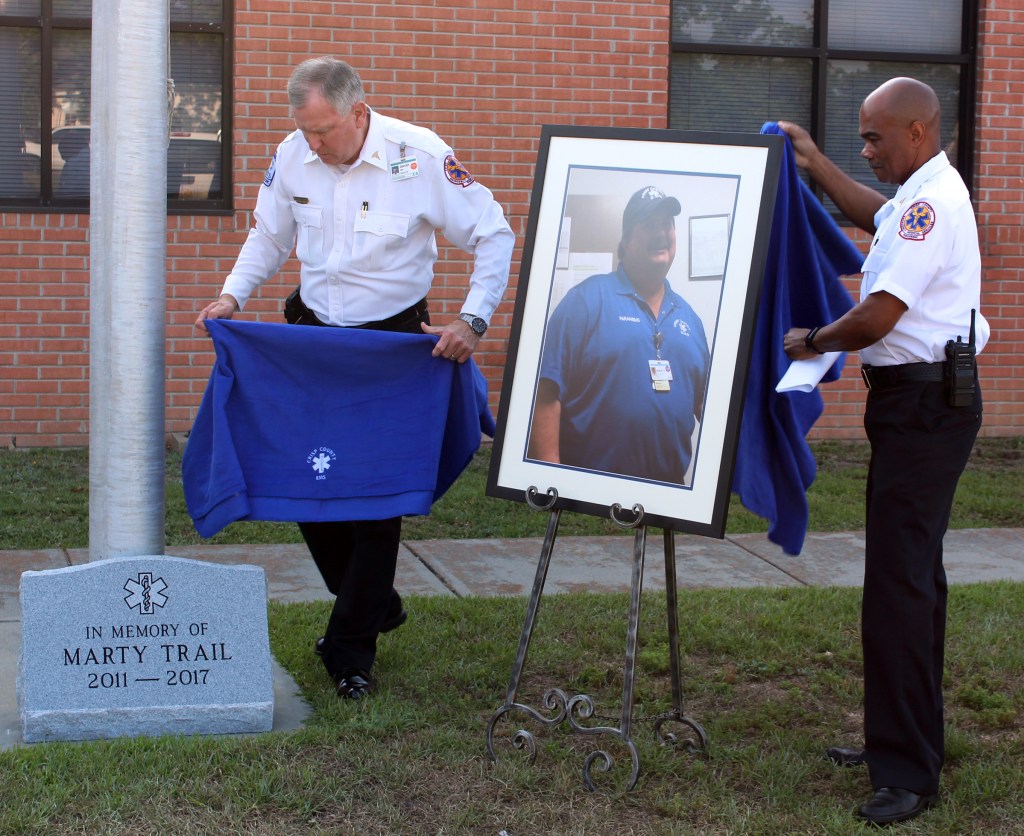 Crisp County EMS Director David Edwards (left) and Assistant Director Jerome Outlaw unveil a commemorative stone and portrait of former EMS staffer Marty Trail during a ceremony on Wednesday in recognition of National EMS Week. Trail was on the Crisp EMS staff from 2011 until his death in November 2017 at the age of 53.

Many of the community’s first responders assembled at Crisp County Emergency Management Services’ headquarters on Wednesday to recognize National Emergency Medical Services Week and memorialize one of their own.

Marty Trail worked with Crisp County EMS from 2011 until his death in November of 2017 at the age of 53. A commemorative stone in his honor was placed at the base of the EMS center’s flagpole and a portrait unveiled as public safety officials, Crisp Regional Hospital staff and administrators, and Trail’s family members gathered to remember the beloved member of the community.

Crisp EMS Director David Edwards described Trail as not just an ideal co-worker but as an all-around excellent human being.

“Marty was the epitome of a caring individual and an absolute great guy. He was such a positive person, and he was the kind of person who treated everybody as if they were family,” Edwards said. “He was always willing to help anyone and everyone. All of us on the staff loved him and we knew he loved us.”

Crisp County Sheriff Billy Hancock likewise expressed an appreciation for Trail’s devotion and attitude, noting that it was not uncommon for Trail to provide for strangers out of his own pocket.

Hancock also noted that EMS first responders, along with all those who work in public safety, share a bond that comes from putting others before one’s self, as Trail did.

“You are in the business of responding to the toughest situations this community can throw at you, and you do it well,” Hancock told the EMS personnel in attendance. “I’m grateful for the job all of you do for us.”

Hancock went on to discuss the notion of gratitude, citing the first verse of the 136th Psalm: “O give thanks unto the Lord; for he is good; for his mercy endureth forever.”

Shortly thereafter, EMS Assistant Director Jerome Outlaw led the crowd in a moment of silence. Perhaps fittingly, a dispatch calling for EMS to respond to a person in respiratory distress at a local motel came over the radio in the midst of it.