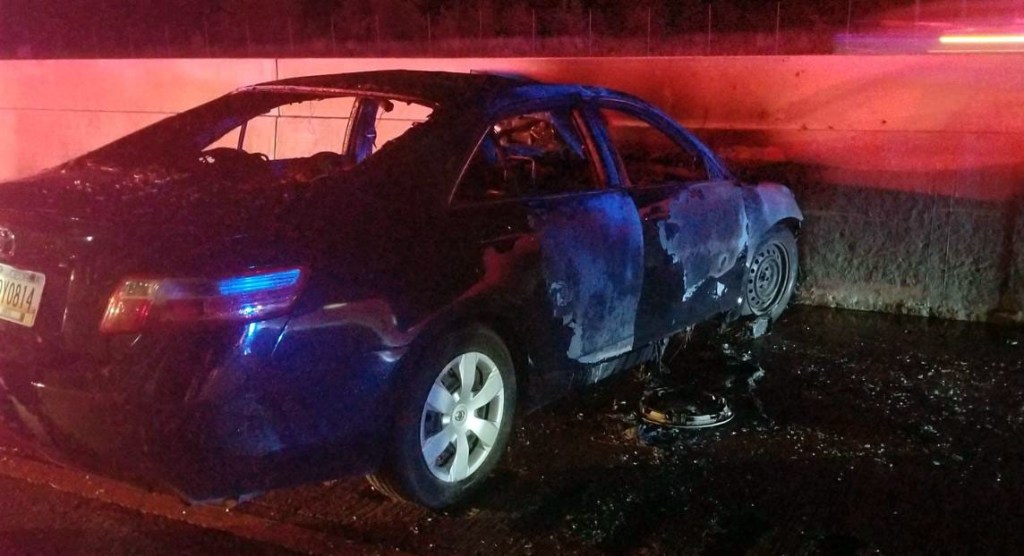 Law enforcement units from the Crisp County Sheriff's Office and the Cordele Police Department removed the driver of this car as it was on fire after a wreck near the southbound 100 mile marker on I-75 at around 5 a.m. The driver is safe, although the driver's identity nor the cause of the wreck has been released. Check back for more news as it develops.

Area law enforcement authorities worked together early Monday morning to pull a driver to safety after a crash on I-75 at around 3:15 a.m. left the driver’s vehicle on fire.

According to a preliminary report, Crisp County Sheriff’s Office Deputy Jake Kelley, along with two other deputies, arrived on the scene of the incident at the 100 mile marker southbound on I-75. There they found a single vehicle facing eastbound after it had crashed into a concrete divider.

The vehicle was on fire, and Cordele Police Department Officer Middleton had broken open some of the vehicle’s glass in an attempt to extricate the driver. Together, the law enforcement professionals were able to get the door open and pull the driver to safety.

Kelley then attempted to extinguish some of the fire to try and clear the vehicle of any other possible occupants. The fire had already fully engulfed the interior of the vehicle along with the entire front portion of the vehicle, according to reports.

CCSO Sgt. Sumner instructed units to set up lane closers for fire crews to begin working the scene, and all three southbound lanes of I-75 were closed until crews extinguished the blaze.

Georgia State Patrol Trooper King arrived on scene to work the wreck and test the driver for impairment.

This is a developing news story. Check back for more details as they become available or read all about it in Wednesday’s print edition of the Dispatch.