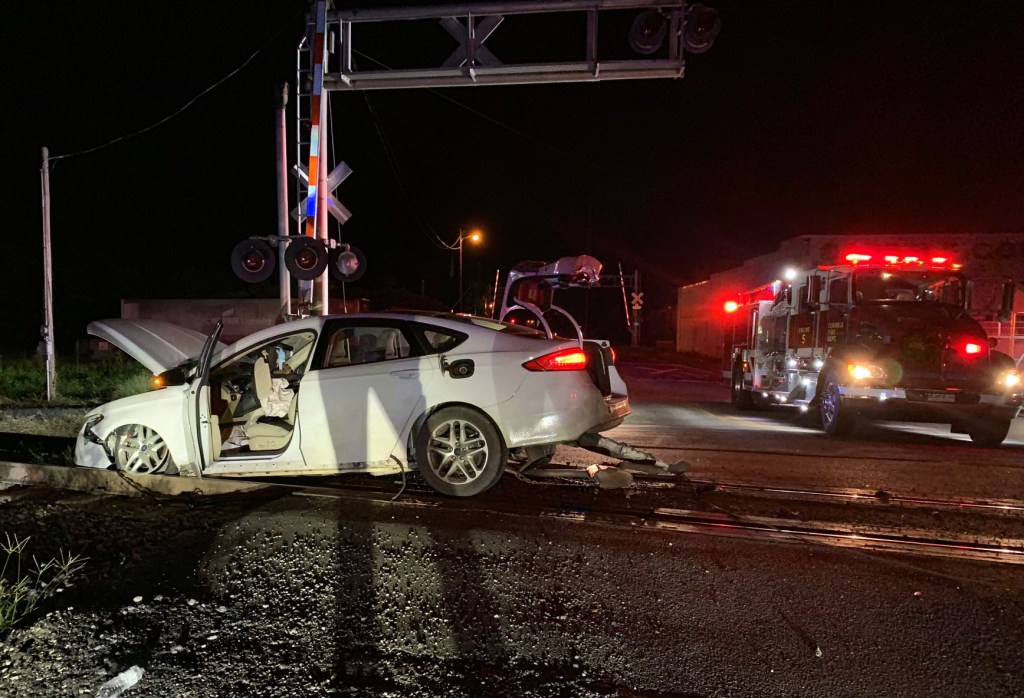 A wrecked Ford Fusion that was reported stolen out of Dooly County sits on the train crossing at N. 3rd St. in Cordele on Thursday night. The driver, a juvenile, attempted to flee when a deputy with the Crisp County Sheriff’s Office tried to initiate a traffic stop. (Photo courtesy CCSO)

Deputies with the Crisp County Sheriff’s Office along with officers with the Cordele Police Department arrested a 14-year-old Thursday night after the juvenile led them on a chase that ended at the railroad crossing on N. 3rd St.

The juvenile was driving a 2016 white Ford Fusion, according to a press release from the Crisp County Sheriff’s Office. At approximately 9:10 p.m., Crisp County E-911 issued a “be on the lookout” (BOLO) alert for the vehicle, which was reported stolen out of Dooly County.

A Crisp County deputy spotted a car matching the description and attempted to initiate a traffic stop. The driver did not stop and instead led the deputy on various city roads at speeds exceeding posted limits.

The juvenile eventually lost control of the car and hit an embankment at the railroad crossing on N. 3rd St. between E. 11th Ave. and E. 9th Ave. The car landed on the tracks and the juvenile then attempted to flee on foot.

CCSO deputies apprehended the juvenile and were able to determine he was in fact the driver of the stolen 2016 white Ford Fusion. Cordele Police Department units assisted in the apprehension.

After the juvenile was cleared at Crisp Regional Hospital, he was turned over to the Vienna Police Department for booking.