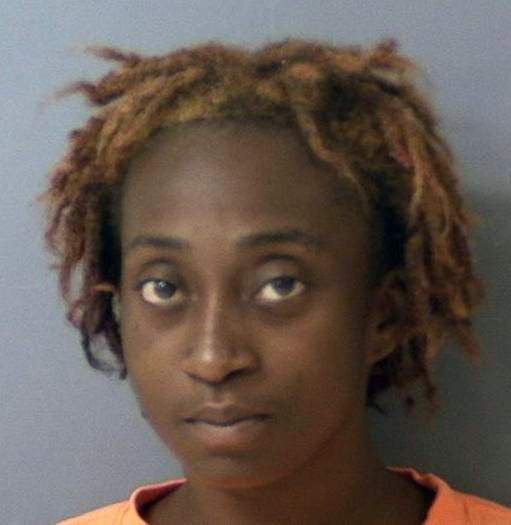 Deputies with the Dooly County Sheriff’s Office arrested Arlisia Briana Taylor of Unadilla on charges of aggravated assault, third-degree cruelty to children, possession of crack cocaine with intent to distribute, and two other charges this past Saturday after she allegedly stabbed a man at the residence they share.

Deputies with the Dooly County Sheriff’s Office arrested a Unadilla woman on charges of aggravated assault, third degree cruelty to children, possession of crack cocaine with intent to distribute, and two other charges this past Saturday after she allegedly stabbed a man at the residence they share.

On Saturday, July 13 at approximately 4:43 p.m., DCSO personnel received a call to 219 Scott Dr. in Unadilla regarding a person hanging. When responding units arrived on scene, they discovered the incident did not involve a hanging but instead a man who was stabbed and needed immediate medical attention.

The man, Clifton Jones, was transported to Macon Medical Center Navicent Health in critical condition. He is now considered in stable condition, according to a DCSO press release.

When DCSO investigators began interviewing witnesses about the stabbing, they identified another resident at the home, Arlisia Briana Taylor, who was transported to the Macon Medical Center to check on Jones. According to DCSO’s press release, Taylor confessed to stabbing Jones during a subsequent interview.

Taylor then reportedly gave information regarding the whereabouts of the weapon used and of illegal narcotics. DCSO personnel secured the premises and requested a search warrant, which was granted. The search revealed approximately 1.5 ounces of crack cocaine and two weapons in the residence. Investigators believe the weapon used in the stabbing was recovered.

During the time of the incident, four minor children under the age of 18 were in the residence, resulting in Taylor being charged with four counts of third-degree cruelty to children. In addition to the charges of aggravated assault and possession of crack cocaine with intent to distribute, along with the child cruelty charges, Taylor faces a single count of possession of tools for the commission of a crime and a single count of possession of a firearm or knife during the commission of a crime.

Governor Brian Kemp announced recently that he has appointed Cordele Superintendent of Utilities Debra Wright to the Georgia Board of Examiners... read more