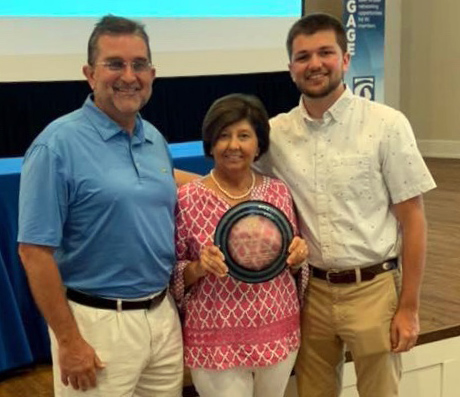 Cordele-Crisp Chamber of Commerce President Monica Simmons stands with her husband David (left) and son Rob shortly after the Georgia Association of Chamber of Commerce Executives presented her with its Legacy Award, the organization's most prestigious award.

For more than 20 years, the Georgia Association of Chamber of Commerce Executives (GACCE) has presented its Legacy Award. The association’s most prestigious award, it recognizes long-term executives who have excelled over a period of years in leading and innovatively building their chamber. The award is based on the demonstration of excellence in areas of chamber leadership, organizational management, service to the profession, community reputation/involvement, and personal attributes.

“We are honored to have Monica Simmons here in Crisp County supporting us, and we truly wouldn’t be where we are today without her. I think I speak for all past chairs as well as myself when I say that Monica is an integral part of what keeps us growing as a chamber and a community. There is not a person who has not sought and received help from her. She really cares about her community,” said Matthew Mackey, who is serving as the 2019 chamber chairman.

Simmons has served as president of the Cordele-Crisp Chamber for over 30 years. She works diligently in promoting Cordele and Crisp County with city, county, state, and federal officials in order to improve the quality of life for the residents of the Crisp County area. During Monica’s tenure, the membership has grown to record-setting numbers and the retention rate is over 92%. She has also coordinated the relocation of the Chamber of Commerce offices into a new location, including overseeing the total renovation of the building. Several new events have been added under Simmons’ leadership:

“As a member of Chamber staff, it is not unusual to receive a phone call or visit from someone who was told by a board or committee member to call or come see Monica and that she could help them,” said Catherine Harrell. “Monica is the rare kind of boss that is willing to get down in the trenches and get dirty too. She is a hard worker and is not above hard work even to the detriment to own health sometimes… but it is because she cares and wants every event to be the best it can be for the community. I would not be here this long if it was not for Monica’s care and helping me grow.”

Monica was nominated by her Pam Carnes, the president and chief executive of the Cherokee County Chamber of Commerce and by employee Catherine Harrell, Keep Crisp Beautiful and Small Business Development. Many supporters provided letters of recommendation. Here are a few quotes from people who wrote in support of Simmons’ nomination, according to a GACCE press release:

“She has accomplished more with her small staff than I have seen many larger chambers accomplish, due in large part to her seemingly infinite energy and enthusiasm for serving our community.”

“From civic and faith-based activities to those supporting children, youth, special needs and disadvantaged citizens, she has given tirelessly of her time and talents.”

“She understands the importance of serving as a mentor and providing guidance, but is equally willing to listen to input and guidance from Chamber members.”