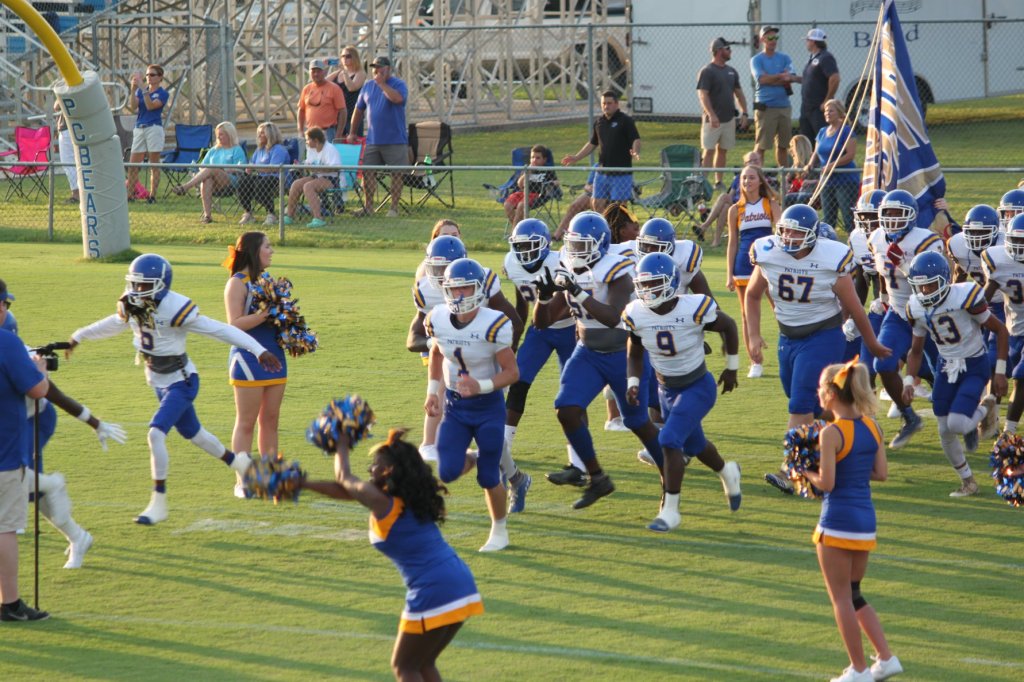 The Wilcox County Patriot football team makes their way onto the field for their scrimmage game at Pierce County High School last Friday night, as the WCHS cheerleaders cheer them on. The Patriots defeated the Pierce County Bears by a final score of 7-3 in the preseason game. (photo by Shaana Hollingsworth)

The Wilcox County High School football team picked up a preseason scrimmage victory on the road against the GHSA class AAA Pierce County Bears on Friday night in Blackshear by a final score of 7-3.

According to the stat sheet, the visiting Patriots forced three turnovers on the night on their way to the win, and Wilcox quarterback Noah Hollingsworth scored the game’s only touchdown on a three-yard run late in the first quarter. Manny Carrillo’s resulting point after attempt was successful, and the Patriot defense made the score stand up for the rest of the night for the preseason win.

Pierce County scored the only other points of the night on a 37-yard field goal early on in the second quarter to make the score 7-3 in favor of the Patriots, and that was where the final total stood at the conclusion of the game as the teams traded defensive stops for the rest of the night.

Hollingsworth completed five out of 12 pass attempts for 63 yards on the night and ran the ball eight times for a total of 32 yards to go with his rushing touchdown.

McAdoo, Freeman, Branson Owens, Jay Brown, and Elijah Howard all had one catch apiece on the night, and also helping out on the Wilcox offensive side of the ball were Tisdol (five carries for 12 yard) and Justin Moore (three carries for 11 yards).

The Patriots will play a home preseason game this Friday night against Johnson County starting at 7:30 p.m. They will then open the regular season with a home game against Wilkinson County on Friday, August 30.