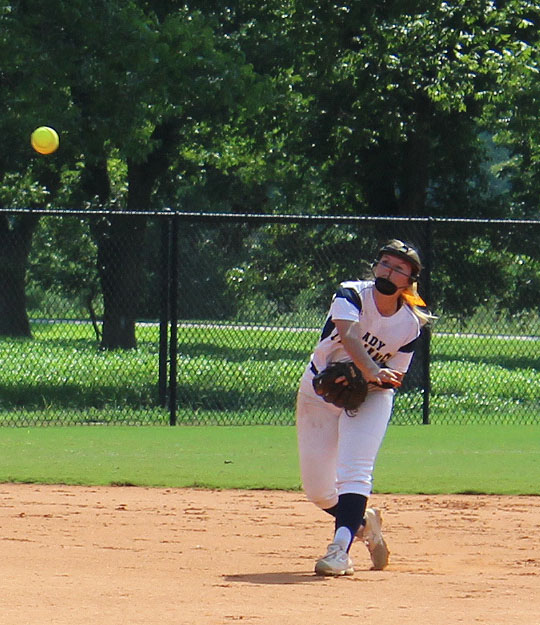 Fullington Academy infielder Marley Jones makes a throw to first base for an out during Thursday afternoon's 8-7 Lady Trojan win over Tiftarea Academy.

The Fullington Academy Lady Trojan softball team (4-0 record on the season) continued a busy second week of the regular season with a game against the Tiftarea Academy Lady Panthers on Thursday afternoon in Pinehurst. The host Lady Trojans came up with an 8-7 walk-off win in the bottom of the eighth inning after holding off a big comeback by the visiting Panthers.

After a scoreless first inning on Thursday afternoon, the Lady Trojans plated two runs in the bottom of the second frame to take the lead against the visitors.

Fullington’s Carmen Phillips reached base on a bunt single with one out in the bottom of the second frame and she later stole second base before making it over to third on an error. Parker Wall hit an RBI groundout shortly after to put the Lady Trojans up 1-0. Maddy McLeod then hit an RBI double that scored Camille Tyndall later on in the inning to put Fullington ahead 2-0 going into the top of the third.

The Lady Trojans went on to increase their lead out to 5-0 with one run in the fourth inning and two in the fifth.

Maggie Rogers knocked in the fourth-inning run with an RBI single that scored Wall. Ella McGalliard later hit a solo home run to center field for the first run of the fifth frame, and Carlee Roberts scored on an error after hitting a double to put the Lady Trojans on top 5-0 entering the sixth inning.

Tiftarea subsequently used three runs on three base hits to fight their way back into the contest in the top of the sixth.

The Lady Trojans answered with a pair of runs in the bottom half of the sixth after RBI singles by Marley Jones and McGalliard.

Fullington entered the seventh inning leading by a score of 7-3, but Tiftarea loaded the bases with two outs in the top half. TA’s McKenna McCard then hit a grand slam to tie the score up at seven runs apiece.

Tiftarea kept the Lady Trojans off the scoreboard in the bottom of the seventh, so the game went into an extra inning, in which both teams started their offensive half of the frame with a base runner at second.

In the top of the eighth inning, Fullington’s Phillips fielded a ground ball near third base and threw home to catcher Lauren Rucker, who tagged out a TA base runner at the plate to prevent the visitors from taking the lead.

The Lady Trojans subsequently made that key defensive play count, as McLeod scored from third on a wild pitch in the bottom of the eighth for the game-winning run, leaving the final score at 8-7 in favor of Fullington.

McGalliard pitched all eight innings for the Lady Trojans to pick up the victory, while the Trojan defense made several big plays throughout the contest, led by Jones at shortstop.

Fullington enters this weekend scheduled to play two games in the Watermelon Tournament in Cordele at the Crisp County Youth Ball Complex.