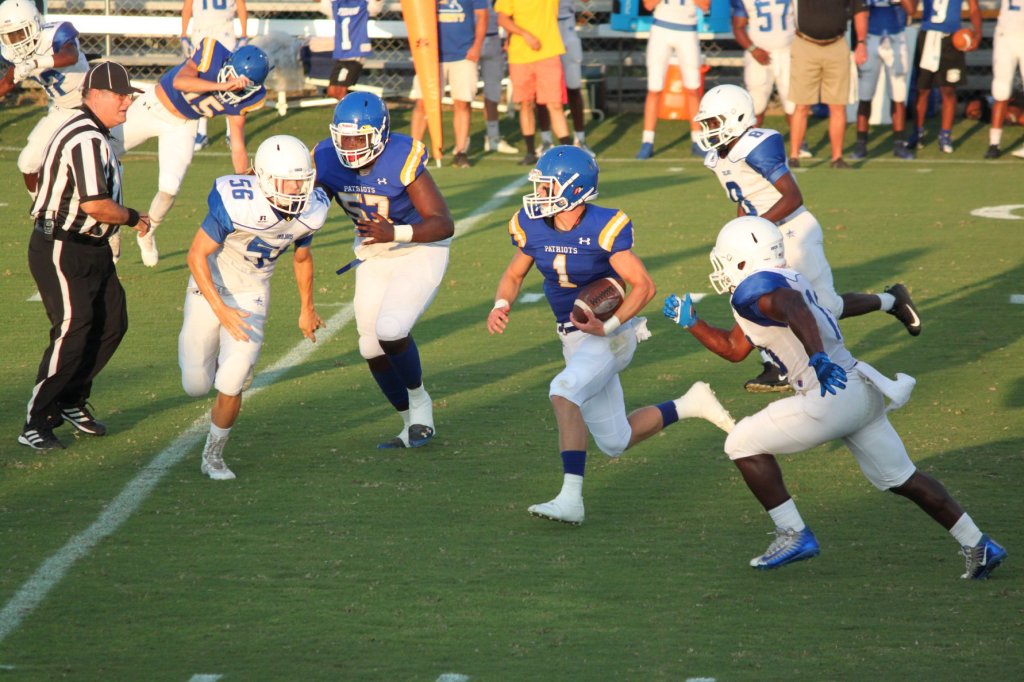 Wilcox County senior quarterback Noah Hollingsworth (1) carries the ball for the Patriots during Friday night's scrimmage in Rochelle against Johnson County. Azavion Deans (57) is also pictured for Wilcox looking to pick up a block to help out his quarterback. (Photo by Shaana Hollingsworth)

The Wilcox County High School football team finished up their preseason scrimmage schedule for the 2019 season with a 28-14 win over Johnson County on Friday night in Rochelle.

Johnson County led by seven points two different times in the first quarter of the game, but it was ultimately 21 unanswered points in the first half by the home-standing Patriots that saw Wilcox finish their preseason schedule with a 2-0 record.

The Johnson County Trojans got on the scoreboard first in the scrimmage with a 70-yard touchdown run by Christian McAfee.

Wilcox subsequently tied the score with a touchdown on their first offensive possession of the night. The Patriots started their opening drive at their own 35-yard line, and shortly after, quarterback Noah Hollingsworth and running back Desmond Tisdol alternated carries to move the Patriots down near the goal line, where Hollingsworth capped off the possession with a score from four yards out. Manny Carrillo’s extra point knotted the score up at 7-7 at the 9:35 mark of the first quarter.

Johnson immediately answered on their next offensive drive, when McAfee threw a 65-yard touchdown pass to CJ Graddy. The score gave the Trojans a 14-7 lead, but those points proved to be the last for Johnson on the night.

On the ensuing Wilcox offensive possession, Hollingsworth and Justin Moore split carries to get the ball into Johnson territory, and Hollingsworth finished the drive with a 29-yard run for his second touchdown of the night. Carrillo tied the score at 14 apiece with the point after.

The Trojans began to threaten on their next drive, but the Patriot defense came up with a big stop on fourth down. Azavion Deans, Branson Owens, Martez Thrower, and Keaun Brown all had tackles to lead Wilcox to the key defensive stop.

Hollingsworth again found the end zone on the subsequent Patriot possession, this time on a 64-yard run. The score gave the Patriots their first lead of the night at 21-14 with just under five minutes to play in the opening period of the scrimmage.

The teams traded defensive stops over the next several possessions until Moore scored the fourth Patriot touchdown of the night on a four-yard run about halfway through the second period. The touchdown plus the extra point that followed put the Patriots up by the 28-14 final score line.

The second half of the contest featured many defensive stops, as neither team registered another point.

Hollingsworth finished the contest with 15 carries for 171 rushing yards and the three touchdowns, while he also threw the ball five times, completing three of those passes for 43 yards with one interception. Moore finished with 102 yards and a touchdown on 10 carries.

Final stats for some of the other offensive contributors for Wilcox were as follows: Dayshawn Lawson- seven carries for 47 yards, Tisdol- six carries for 44 yards, Thrower- six carries for 31 yards, Cameron Patterson- two catches for 38 yards, and Elijah Howard- one catch for 12 yards.

Brown led the Wilcox defense in total tackles in the game with seven, while Kassidy Deans had six total stops. Thrower tallied six total stops as well, while Tisdol had five, and both received credit for 0.5 sacks on the stat sheet.

With their preseason scrimmages complete, the Patriots will now be preparing for their regular season opener against Wilkinson County, which is scheduled for Friday, August 30 in Rochelle. The Patriots defeated the Wilkinson County Warriors in last season’s matchup by a final score of 30-0.