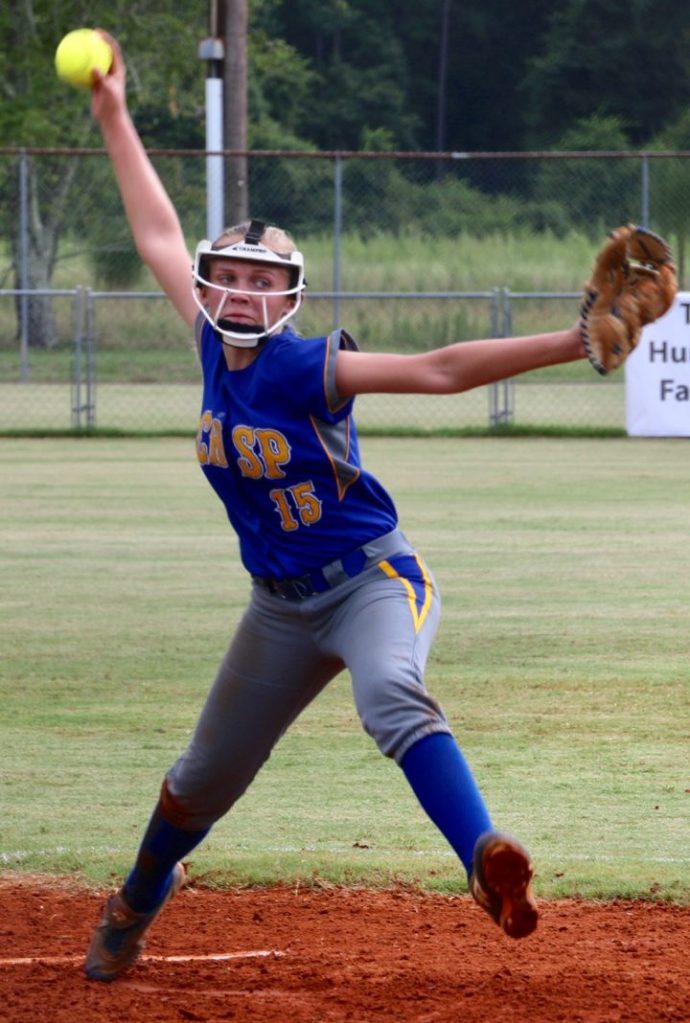 Crisp County Middle School pitcher Reagan Bozeman is pictured during a game last week against Cook Middle School. Bozeman led the CCMS Lady Cougars to a home victory against Lee County East on Thursday afternoon by pitching a six-inning complete game shutout, in which she struck out 12 batters. The CCMS Lady Cougars won the game against Lee East by a final score of 8-0.

The High School Lady Cougar varsity and JV teams made the short trip over to Sylvester and came up with a sweep against Worth County High School’s teams by scores of 12-4 (varsity game) and 6-0 (JV). The middle school Lady Cougars picked up a shutout victory in a home game against Lee County East by a final score of 8-0 on the day.

CCHS vs Worth Co.

The Crisp County varsity Lady Cougars picked up their first region win of the season over the Worth County Lady Rams in Sylvester by a 12-4 final score on Thursday.

“We’re excited to get a win out of our first region game,” said CCHS Head Coach Ben Robbins. “Our defense has got to play cleaner and they will.”

Rilee Duckworth got the start for the Lady Cougars in the pitcher’s circle for the region opener and she picked up the win after pitching five innings and striking out five batters while allowing six hits.

“Duckworth did her job and showed a lot of grit when we got down early in the game,” Coach Robbins said on the performance of the senior pitcher.

Riley Blampied, Kirin Webb, Liv Taylor, Ainslee Forsythe, Macy West, and Rylee Little each had one hit for the Lady Cougars in the region victory.

“Our offense has shown good plate discipline so far this year and is starting to heat up. Any time the bottom third of your lineup has six hits it’s a good sign,” Robbins added.

The win over Worth County put the CCHS varsity team’s record at 4-2 overall on the season.

In JV action, Crisp County won against Worth earlier in the day by a final score of 6-0.

Peyton Adkins picked up the win in the pitcher’s circle for the Lady Cougars in the JV game.

Sydney Young was the offensive leader for Crisp in the JV contest with two hits, one walk, and two stolen bases.

The next games for the CCHS softball teams are scheduled for next Tuesday afternoon at Tift County High School.

She threw a six-inning complete game shutout, while allowing just one hit and striking out 12 batters to lead CCMS to the win.

The middle school Lady Cougars will next be in action on Tuesday afternoon when they play a road game at Schley County.

The Fullington Academy Lady Trojan softball team added wins this week against Terrell Academy and Crisp Academy to bring their overall record to 6-3 so far on the season.

On Tuesday afternoon, Fullington made a trip over to Dawson for a road game against the Terrell Academy Lady Eagles. Fullington came away with their fifth win of the season on the day, after run-ruling Terrell by a score of 18-7 after just four innings of play.

Fullington held a 6-5 lead after three innings in the game, and the Lady Trojans subsequently poured on 12 runs in the top half of the fourth frame to end the contest early.

Every player in the Fullington starting lineup scored at least one run in the contest.

Fullington hosted Crisp Academy on Thursday afternoon in Pinehurst, and the Lady Trojans made it two wins for the week by defeating CA 17-3 in another run-rule shortened contest.

Rogers pitched four innings and struck out five CA batters while conceding just three runs to get the win.

Eliza Hill led the CA batting lineup with a double, two RBIs, and a run scored. Isabel Fernandez tallied one hit and one run scored for the Lady Cats, and Abigail Brown scored the other CA run.

Fullington will be on the road at Windsor Academy on Tuesday afternoon for their next contest, while Crisp Academy’s next contest will be a home region game against Terrell on Thursday afternoon starting at 4 p.m.

Blakelyn Bloodworth got the win in the pitcher’s circle for the Lady Patriots by pitching all four inning and allowing four unearned runs on just three hits and one walk.