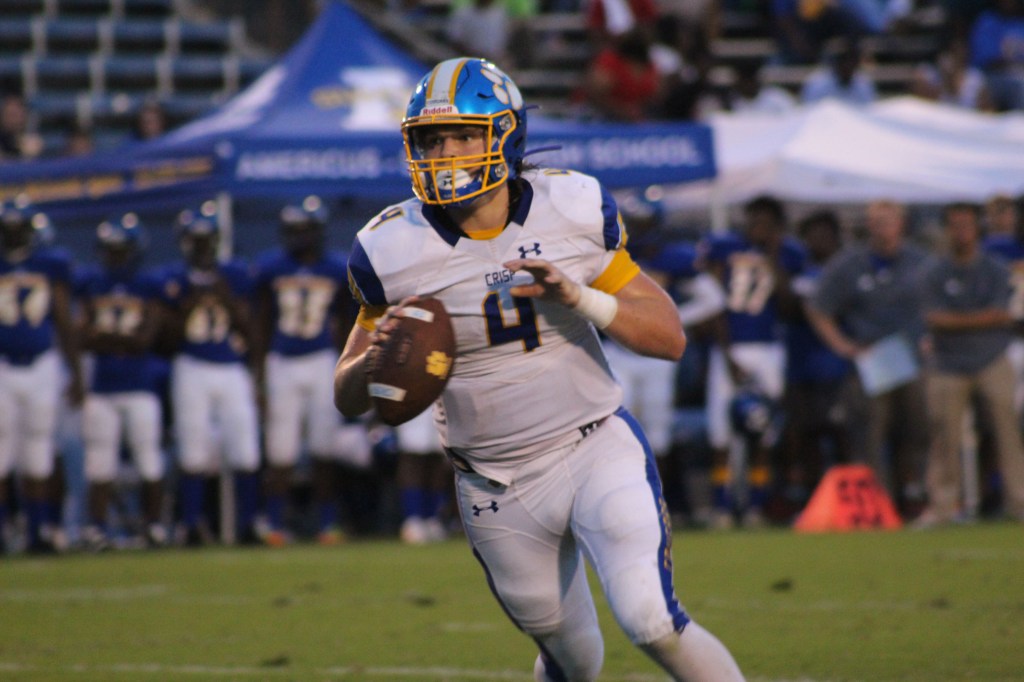 CCHS quarterback Jack Carter rolls out looking for an open receiver in Friday’s 29-14 Cougar win over the Americus-Sumter Panthers.

The Crisp County High School football team opened the 2019 regular season by renewing their “Battle of the Flint” rivalry matchup with the Americus-Sumter Panthers on Friday night. After falling behind to the home-standing Panthers on the first offensive play of the game, the Cougars responded well and later took over the contest to come away with a 29-14 road win.

The Panthers scored the game’s first points on an 80-yard touchdown on the first snap of the game.

The Cougars later had to punt on their first offensive possession of the game, but the Crisp defense quickly forced a stop to give the offensive unit a chance to get on the scoreboard.

The CCHS offense took the lead shortly after, and they never let go of the advantage for the remainder of the contest.

The first Cougar points of the night came on an 11-yard touchdown pass from Jack Carter to Chris Paul. Kamron Moate scored a two-point conversion on the subsequent point after attempt to give Crisp an 8-7 lead at the 6:44 mark of the first quarter. The key play that set up the first Cougar points was a pass from Carter to AJ Lofton that resulted in a nearly 70-yard pickup.

Later on in the first quarter, the Panthers got the ball deep into Cougar territory, but Crisp ended up holding Americus to a field goal attempt, which was missed.

On the very next play, Lofton found running room for what resulted in a gain of nearly 50 yards. The big run set Crisp up deep in Americus territory, and just four plays later Marquise Palmer found the end zone on a run for the second Cougar touchdown of the night. Connor Richmond’s point after try was successful, and CCHS led 15-7 just over a minute into the second period.

The teams traded defensive stops for most of the remaining time in the second quarter, but the Cougars added to their lead just before the half when Carter scored on a short touchdown run with 34 seconds to go in the period. Crisp took a 22-7 lead into the halftime break following the score.

The third quarter featured several Panther scoring opportunities after long drives that saw them move the ball deep into Crisp territory, but each time the Cougar defense came up with a big stop, including a pair of crucial goal line stands.

Chris Paul, Jayren Fox, Javan Hardemon, Jh’quan Bass, Sirad Bryant, and Perici Gaines were just a few of the Crisp defensive players that came up with big plays during the second half.

The Cougars came up with yet another important defensive play halfway through the fourth quarter when linebacker Preston Lavant intercepted a deflected pass near midfield and returned it all the way for a touchdown. Crisp led 29-7 with 6:31 to play in the contest following the score.

CCHS forced another turnover on the next Americus drive when defensive back J’Kobe Harris leaped high to make a one-handed interception deep in Cougar territory.

The Panthers later managed to bring the score closer with a short touchdown run with less than 40 seconds to play to bring the final score of the night to 29-14.

“The defense played lights out tonight, and I think the offense is coming along. I think on all three phases we still have a lot to clean up,” said Crisp County Head Coach Brad Harber on the performance of the Cougars on the night. “Our guys held their composure really well in a hard-fought victory against a bitter rival. I was proud of their composure and proud of the win.”

The Cougars will be in The Den next Friday night for their home opener against West Laurens with kickoff scheduled for 7:30 p.m. 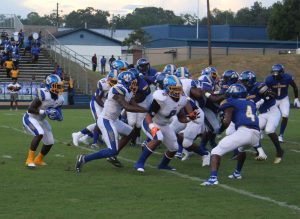