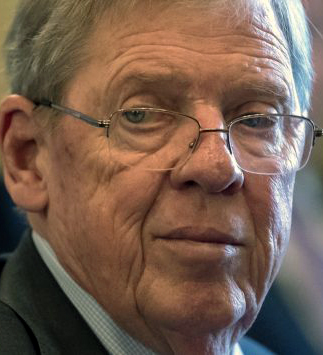 U.S. Senator Johnny Isakson of Georgia announced on Wednesday that he will retire at the end of the year due to health reasons.

‘Has been a true statesman,’ says Bishop

Local political leaders have nothing but high praise for U.S. Sen. Johnny Isakson in the wake of his announcement on Wednesday that he will resign his post at the end of the year for health reasons.

State Rep. Noel Williams of Cordele, who serves the 148th District in the Georgia House of Representatives, said Isakson’s devotion to the people of Georgia has been an inspiration to countless colleagues during his long and distinguished career.

U.S. Rep. Sanford Bishop, who represents Cordele as part of Georgia’s 2nd Congressional District, served much of his own legislative career with Isakson.

“Johnny Isakson has been a true statesman in his remarkable career as a public servant for Georgians. I first met Johnny in the Georgia House of Representatives in 1977 where we served together. We developed a friendship which has endured through our work together in the U.S. House of Representatives and during his service as our U.S. Senator. He has not viewed issues from a partisan perspective, but for the good of all Americans. We will miss him in the delegation. Vivian and I will certainly keep Johnny and his family in our thoughts and prayers,” said Bishop.

Don Cole, the chairman of the Crisp County Republican Party, said Isakson is remarkable for his approach to governing.

“Senator Isakson has a lifetime of dedicated public service to Georgians and all Americans. As Chairman of the Senate Committee on Veterans Affairs, he spearheaded major reforms in the Department of Veterans Affairs including the VA MISSION Act. Earlier this year he introduced the Agricultural Trucking Relief Act to ease regulatory burdens on the trucking and the agricultural community,” Cole said. “He brought a common-sense statesmanship to the US Senate. His battle with Parkinson’s disease is a reminder of the frailty of our time in this world. Johnny Isakson has invested his life in serving his fellow man for as long as his body would let him. We pray for Senator Isakson and his family as he retires in December.”

In his statement announcing his resignation, Isakson said, “After much prayer and consultation with my family and my doctors, I have made the very tough decision to leave the U.S. Senate at the end of the year.

“I am leaving a job I love because my health challenges are taking their toll on me, my family and my staff. My Parkinson’s has been progressing, and I am continuing physical therapy to recover from a fall in July. In addition, this week I had surgery to remove a growth on my kidney.

“In my 40 years in elected office, I have always put my constituents and my state of Georgia first. With the mounting health challenges I am facing, I have concluded that I will not be able to do the job over the long term in the manner the citizens of Georgia deserve. It goes against every fiber of my being to leave in the middle of my Senate term, but I know it’s the right thing to do on behalf of my state.

“I look forward to returning to Washington on September 9 when the Senate goes back into session. And after December 31, I look forward to continuing to help the people of Georgia in any way I can and also helping those who are working toward a cure for Parkinson’s.”

Currently, Sen. Isakson serves as the chair of both the Senate Veterans Affairs Committee and the Senate Ethics Committee. He is the only Georgia Republican to be elected to a third term in the U.S. Senate.

Aged 74, Isakson was diagnosed with Parkinson’s disease in 2013. In July, Isakson fell in his Washington, D.C. apartment and suffered four fractured ribs and a torn rotator cuff. On Monday, Isakson underwent surgery at WellStar Kennestone Hospital in Marietta to remove a 2-centimeter renal cell carcinoma from one of his kidneys.

Governor Brian Kemp will appoint a successor to fill Isakson’s seat until an election can be held in November of next year. Kemp has not announced a timetable on making that decision.