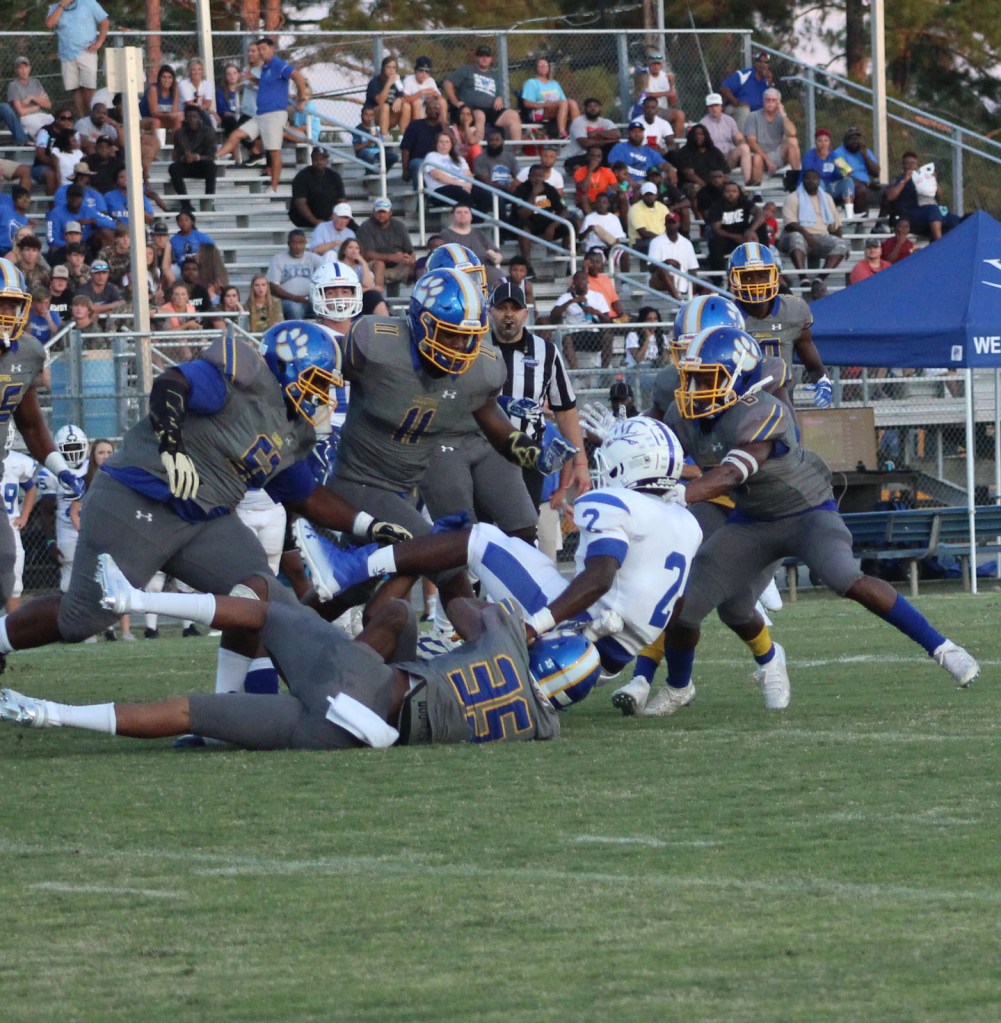 Several members of the Crisp County defense converge to tackle a West Laurens ball carrier during the first half of Friday night’s game. Javan Hardemon (35), Chris Paul Jr. (11), Damion Cross (6), and Perici Gaines (52) are all pictured for the Cougars.

CORDELE- The Crisp County High School football team played their home opener on Friday night versus the West Laurens Raiders. The visiting Raiders left Cordele with a 16-13 win on the night after holding off a Cougar fourth quarter comeback attempt.

The Raiders led for the majority of the night and two different times they held a 10-point advantage on the scoreboard. Crisp County fought their way back to within three points of the lead late in the fourth quarter before the West Laurens defense forced a Cougar turnover on downs with just over a minute to play in the contest to seal the win.

The Raiders came up with the first real scoring opportunity of the night after their defense forced an interception on a pass attempt by Crisp quarterback Jack Carter. The subsequent return set West Laurens up inside the 10-yard line, but they came away with just a field goal on the drive after the Crisp County defense got pressure on the Raider quarterback and forced three straight incomplete passes. The field goal gave West Laurens a 3-0 lead with 11 seconds to play in the first quarter.

The Raiders forced the Cougars to punt on the next drive using a pair of sacks and a Crisp penalty.

10 plays later, West Laurens scored on a 16-yard touchdown pass to take a 10-0 lead with just over five minutes to go in the first half.

After the teams traded another pair of defensive stops, the Cougars scored their first points of the night on a 46-yard field goal by Connor Richmond with 44 seconds to play in the half. Jaylin Epps set up the scoring play for Crisp after receiving a West Laurens punt near midfield before taking it down inside the Raider 35-yard line.

The Raiders ran the last few seconds of the first half off the clock to take a 10-3 lead into the break.

The Cougars got the ball to start the second half and they put together a 16-play scoring drive to further cut into the West Laurens lead. Richmond ended the possession with his second field goal of the night, this time on a kick from around 25 yards out, to get the Cougars to within four points of the lead at 10-6. The key play of the drive was a 38-yard pass from AJ Lofton to Sirad Bryant that set the Cougars up with a first and goal from inside the four-yard line. The Raiders held Crisp to just the field goal shortly after, leaving the visitors with the advantage at 10-6 at the 5:20 mark of the third quarter.

Bryant, Jayren Fox, and Chris Paul Jr. led the Cougar defense to a quick stop shortly after to get the CCHS offense back on the field, but the Raiders subsequently came up with another interception late in the third period to retake the momentum.

West Laurens extended their lead out to 16-6 with a touchdown pass from AJ Mathis to Bradley Wilson just 40 seconds into the fourth quarter, but the ensuing point after attempt was no good.

After a few more defensive stops between the two teams, the Cougars cut the lead to 16-13 when Lofton threw a 35-yard touchdown pass to Bryant with just over four minutes to play in the contest.

West Laurens recovered the subsequent Crisp onside kick try, but their attempt to run out the clock was cut short by the Cougar defense.

The Crisp County offense got the ball at their own 29-yard line with 2:20 to play following the West Laurens punt after the CCHS defensive stand, but the Raider defense held the Cougars on fourth down shortly after to finish the game off for the 16-13 road win.

The defeat put the Cougars at 1-1 on the young season. They will try to get back in the win column next Friday night when they host Dutchtown. The Dutchtown Bulldogs are 2-0 so far this season.