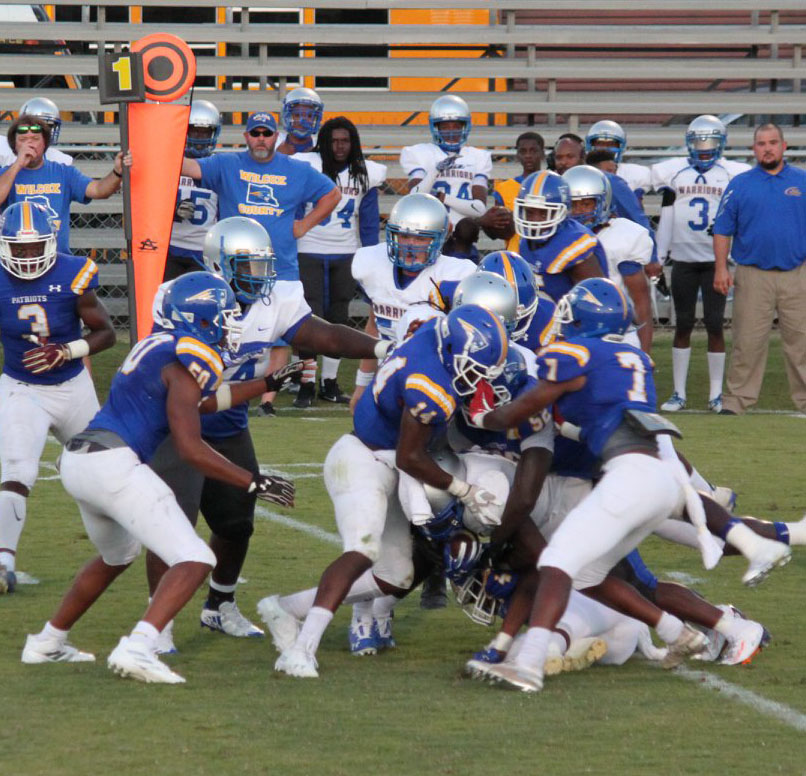 The Wilcox County High School football team opened the 2019 regular season with a 46-2 win over the Wilkinson County Warriors in Rochelle on Friday night.

The home-standing Patriots jumped out to an early 13-0 lead during the first quarter and they later took a 27-0 advantage into halftime. Wilcox later added 19 more points in the third quarter to stretch their lead out to 46-0.

The Warriors tallied their two points on a safety in the fourth quarter.

The Patriots scored two touchdowns in the first quarter, both on passes from quarterback Noah Hollingsworth to receiver Elijah Howard. The first score was a one-yard touchdown near the five minute mark of the first period, and the second was a 44-yard strike with less than three minutes to go in the quarter.

Hollingsworth and Howard later connected for a 29-yard score halfway through the second quarter. The Patriots subsequently added the two-point conversion for a 21-0 lead. Wilcox closed out the first half scoring when Justin Moore punched in a short touchdown run just before halftime to send the Patriots into the break up 27-0.

The Patriot offense continued the air attack with two more Hollingsworth touchdown passes in the third quarter. The quarterback found Martez Thrower for a 32-yard score near the halfway mark of the third period, giving the home team a 33-0 lead.

The Patriots finished their scoring for the night on their next possession when Dayshawn Lawson scored a touchdown on a seven-yard run.

Hollingsworth finished the game with 16 completions on 25 pass attempts for 233 yards and the five touchdown passes. He also ran the ball six times for 48 yards.

Moore had six carries for 28 yards to go with his rushing touchdown, and Desmond Tisdol pitched in four rushes for 19 yards for the Patriot rushing attack.

Howard finished with five catches for 92 yards and the three receiving touchdowns, while Jordan Brown ended the night with three catches for 57 yards and one touchdown. The final stat sheet for Wilcox credited Branson Owens and Cameron Patterson with two catches apiece, while Ke’Andre Faison, Matt McAdoo, and Christian Freeman each contributed with one catch on the night.

According to the final stat sheet, the Patriot defense held Wilkinson County to just 69 total offensive yards on the night while also forcing three turnovers, including an interception by Thrower and a fumble recovery by Kassidy Deans. The Patriot special teams unit blocked two Warrior punts on the night, as Tisdol, among others, applied heavy pressure on the Wilkinson punt team.

Thrower and Keaun Brown led the Wilcox defense in tackles on the night with eight total stops each.

The strong performance from the Patriots on the night gave first-year Wilcox Head Coach Rob Stowe his first official win as the leader of the WCHS coaching staff.

The Patriots will play their first road game of the season next Friday night at rival Hawkinsville. The Red Devils of Hawkinsville are 0-2 so far this season with losses to Bleckley County and Rutland High School.

Wilcox County has defeated their longtime rivals from Hawkinsville in each of the last two seasons, with last year’s game ending in a 23-0 win for the Patriots in Rochelle.

Kickoff in Hawkinsville is scheduled for 7:30 p.m on Friday night. 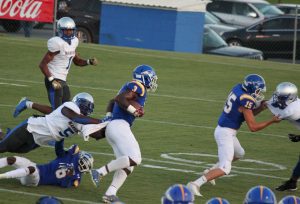 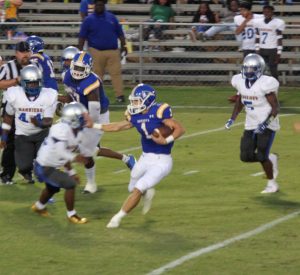