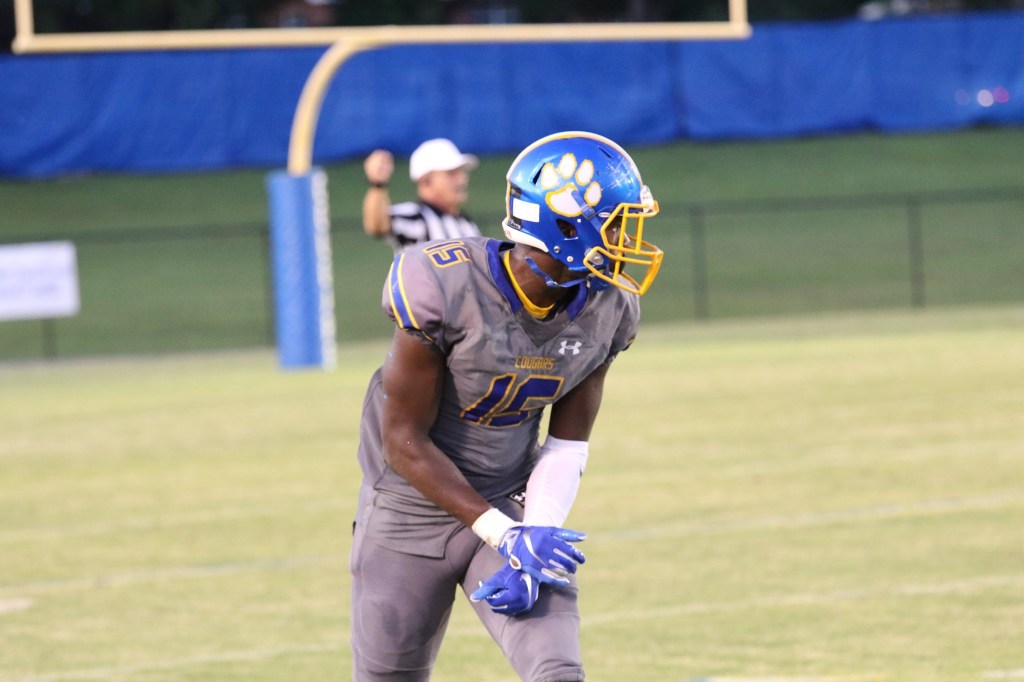 Crisp County receiver Sirad Bryant is pictured getting set for the next play during Friday night’s 16-13 defeat against West Laurens. Bryant caught the lone Cougar touchdown on the night during the fourth quarter on a pass from AJ Lofton. (Photo by Jessica Carter)

The Crisp County Cougars (1-1 record) and the Dooly County Bobcats (0-1) both fell to defeats on their home field this past Friday night. Both teams will be looking to get into the win column this week against teams that beat them on their home fields last season.

The Cougars fell to class 4A team West Laurens (2-0) by a final score of 16-13 last Friday in a game that the road team was able to hold off a Crisp second half comeback attempt. Scoring on the night for Crisp County was handled by Sirad Bryant, who caught a touchdown pass from AJ Lofton during the fourth quarter, and kicker Connor Richmond, who made two field goals and an extra point.

Up next for the Cougars is a home game against a very tough, highly ranked 5A squad, the Dutchtown Bulldogs. The Bulldogs will enter Friday night’s contest in Cordele as the number five ranked team in Georgia High School Football Daily’s class 5A Rankings. The Bulldogs have posted a 2-0 record so far this season with wins over Creekside (59-14) and Langston Hughes (41-27).

The Bulldogs defeated the Cougars in Cordele last season by a final score of 28-3.

The offensive unit for the Bulldogs has several weapons that Crisp will try to stop. According to Georgia High School Football Daily, Dutchtown’s starting quarterback Arendez Fedd was 13-of-22 passing for 356 yards and five touchdowns in their game Friday night against Creekside. Their leading receivers in that contest were Nate McCollum (five catches for 201 yards and two touchdowns) and Shemar Nelson (three catches-141 yards-one touchdown).

Kickoff from The Cougar Den is scheduled for 7:30 p.m. on Friday night.

Dooly County fell to a 37-7 defeat against the Worth County Rams this past Friday night, and the Bobcats are now about to enter a very tough four-game stretch that features games against schools that are routinely near the top of their classifications.

That stretch for the Bobcats will start out with a road game at Fitzgerald High School (1-1) this coming Friday night.

Fitzgerald defeated Dooly County by a final score of 27-26 in Vienna last season.

Fitzgerald dropped from number four to out of the class AA top 10 rankings this week after falling to rival Irwin County by a final score of 35-8 this past Friday night.

The tough opposition continues for Dooly in the following weeks, as they will matchup with defending class A state champions Clinch County (1-0, ranked number one), followed by region opponents Schley County (1-1, ranked eighth in class A), and Macon County (0-1).

Update at 3 p.m. on Wednesday: The Bobcats will be playing their first game under interim Head Coach Quinnen Peavy this Friday night against Fitzgerald, as the Dooly County School System announced on Wednesday that Coach Ashley Harden has left the program.