Wilcox uses big first half to knock off Hawkinsville 48-14 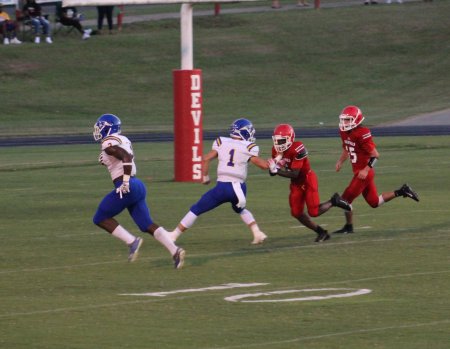 ____________________Desmond Tisdol (3) makes his way into the end zone for one of his two touchdowns during Friday night's game at Hawkinsville as Noah Hollingsworth (1) picks up a block. (Photo by Shaana Hollingsworth) 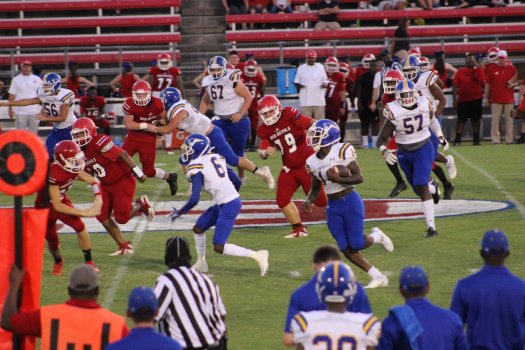 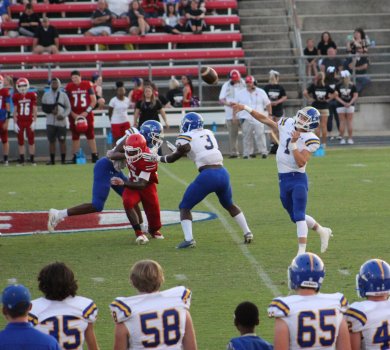 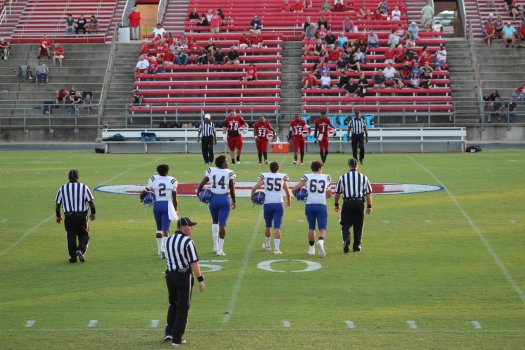 The Wilcox County High School football team brought their record to 2-0 on the season with a road win over rival Hawkinsville by a final score of 48-14 on Friday night.

The visiting Patriots led 34-0 with around nine minutes to go in the second quarter, and they later took a 41-7 lead into halftime. Both teams added one touchdown in the second half for the 48-14 final score.

Wilcox quarterback Noah Hollingsworth scored on a 15-yard touchdown run on the first Patriot possession of the night, and Desmond Tisdol then tacked on a two-point conversion for an 8-0 lead.

Following a Hawkinsville punt on the subsequent possession, Tisdol scored a 33-yard rushing touchdown to put the Patriots up 14-0 with 7:55 to play in the opening quarter.

After the teams swapped a few defensive stops, Branson Owens scored the third Patriot touchdown of the night on a short run. Manny Carrillo’s point after gave Wilcox a 21-0 advantage with just over three minutes to go in the first period.

The Patriots kept the momentum rolling with another score just four plays into the second quarter when Hollingsworth threw a pass to Cameron Patterson for a 24-yard touchdown. Carrillo’s ensuing extra point put Wilcox ahead 28-0 at the 11:17 mark of the second quarter.

The Wilcox defense got in on the scoring on the subsequent Hawkinsville drive when Patriot defensive back Christian Freeman intercepted a pass attempt by the Red Devil quarterback and returned it for a touchdown. Wilcox went ahead 34-0 with 9:21 to play in the first half with the defensive score.

Hawkinsville put up their first points of the night with a short touchdown run on their next offensive possession to bring the score to 34-7, but Tisdol increased the Wilcox lead back out to 41-7 with a 64-yard touchdown run on the next Patriot drive.

The Red Devils scored their second touchdown of the night on a five-yard run by Alex Lumpkin late in third quarter, but the Patriots posted the final points of the game early in the fourth period when Hollingsworth connected with Patterson on a 58-yard touchdown pass. The ensuing extra point brought the final score line of the night out to 48-14 in favor of the Patriots.

The Patriots put up a total of 414 offensive yards on the night to just 187 for Hawkinsville. Hollingsworth completed seven of 11 pass attempts with 179 yards and two touchdowns to just one interception in the game, while also running the ball six times for 42 yards and a score. Tisdol led Wilcox in rushing on the night with 106 yards and two scores on just three carries.

Thrower led the Wilcox defense on the night with 11 total tackles and one sack. Owens finished the game with nine total tackles, while Qua Miller and Keaun Brown tallied six total stops apiece.

Up next for the Patriots will be a home game this Friday night against the Berrien County Rebels with kickoff set for 7:30 p.m.

The Berrien Rebels defeated Wilcox by a final score of 28-19 when the two matched up in Nashville last season.

The Rebels are 2-1 so far this season. Berrien fell to Irwin County by a final score of 42-7 in their first game of the season. Since then the Rebels have won two in a row with a 61-43 win over Atkinson County two weeks ago, followed by 44-26 win over Bacon County this past Friday night.