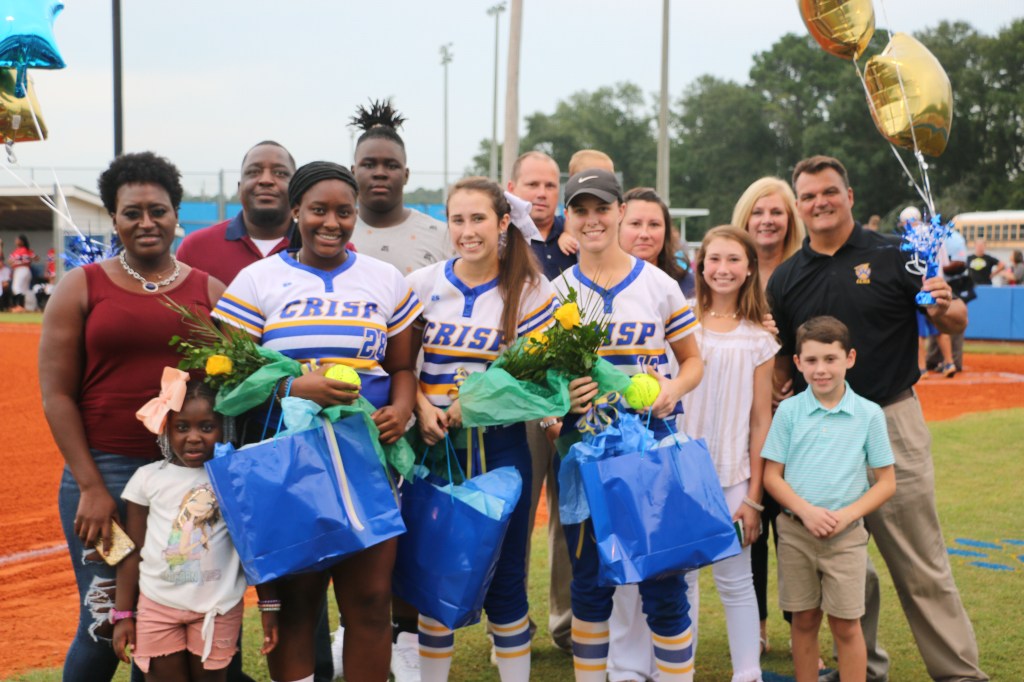 CORDELE— The Crisp County High School Lady Cougar softball team defeated Dodge County (9-6 overall record) by a score of 8-0 on Monday evening for their senior night game. Prior to the contest the team celebrated their three seniors, Riley Blampied, Rilee Duckworth, and Janiah White, with a brief ceremony and gift presentation.

Following the senior night festivities, the Lady Cougars went to work on picking up their eighth win of the season.

Duckworth pitched a three up, three down top half of the first inning, and a pair of Dodge errors in the bottom half of the frame allowed Crisp County’s Jo Brady to score the first run of the contest.

The visitors threatened with a run-scoring opportunity in the top half of the second inning following a one-out double. The next batter hit a single to right field, but Crisp outfielder Peyton Bozeman put a throw right on target to home plate to Brady, who tagged the Dodge County base runner out trying to score. Duckworth finished the inning off by striking out the next batter.

Crisp County then doubled the lead in the bottom of the third. Peyton Adkins drew a leadoff walk and later moved into scoring position after a single by Brady. Sara Ruth Raines subsequently provided the run-scoring hit with an RBI single to center, giving the Lady Cougars a 2-0 advantage entering the fourth frame.

Following a scoreless fourth inning, Crisp County tacked on a run in the bottom of the fifth. Blampied hit a leadoff single and made it over to third on the play after a Dodge County error. Kirin Webb then hit an RBI single to left field to score Blampied and put CCHS up 3-0.

Duckworth pitched a scoreless top half of the sixth with a pair of strikeouts, and the Lady Cougars subsequently scored five runs in the bottom half to finish the game off for the 8-0 win after six innings of play.

Crisp had the bases loaded in the bottom of the sixth following infield hits by Olivia Taylor, Bozeman, and Blampied. Webb came up to bat with two outs in the frame shortly after and hit a ball on the infield that led to another Dodge County error for the first run of the inning, and Brady subsequently ended the game an inning early with a grand slam to deep centerfield for the 8-0 final score line.

Duckworth finished the contest with three hits allowed, one hit batter, and seven strikeouts over the six-inning complete game shutout.

The Lady Cougars brought their overall record to 8-3 on the season with the win.

Next up for CCHS is a region doubleheader at home against Worth County on Thursday afternoon. Game one is set for 4 p.m. with game two to follow.