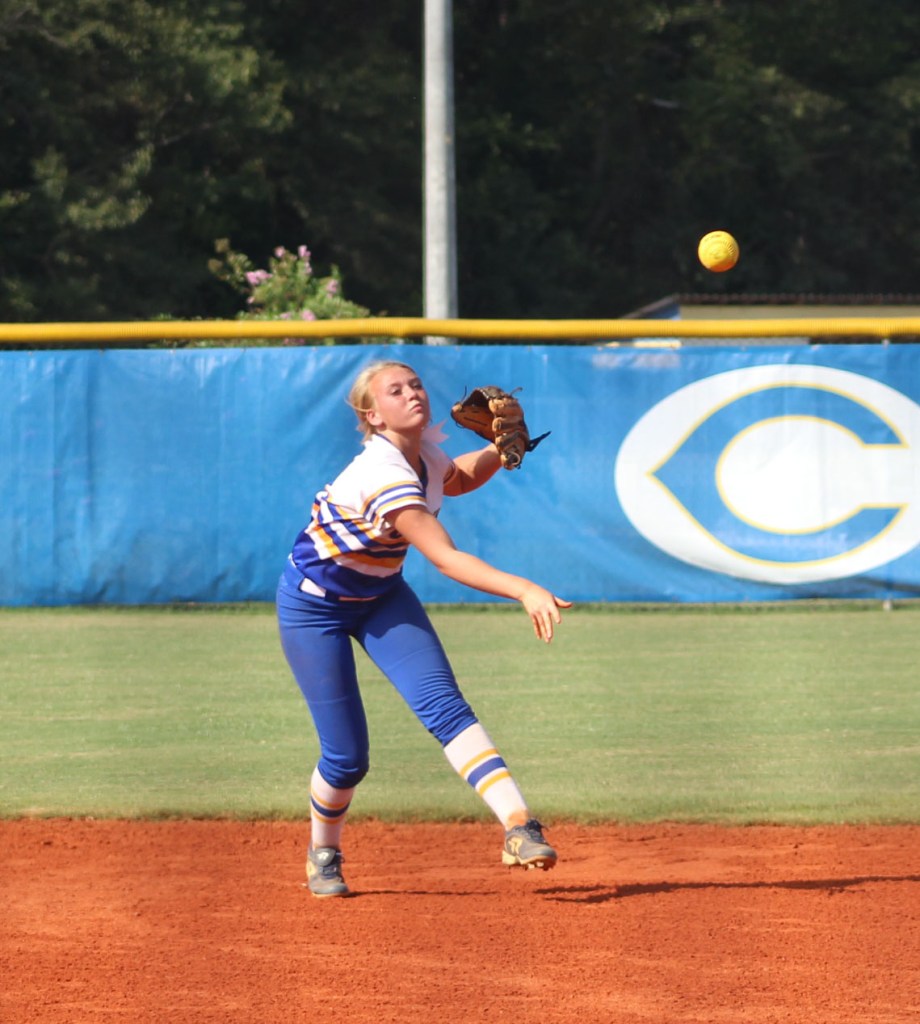 Crisp County infielder Ainslee Forsythe makes a throw to first base after fielding a ground ball during game one of Thursday's doubleheader versus Worth County.

On Thursday afternoon Crisp County’s high school and middle school softball teams both added blowout wins to their overall record. The high school Lady Cougars swept a home doubleheader against region opponent Worth County on the day by scores of 10-2 and 11-1, while the middle school team picked up a road win at Fitzgerald by a score of 15-0.

In game one of Thursday’s region doubleheader, the Lady Cougars took a 1-0 lead in the bottom of the second inning on a bases loaded walk by Peyton Bozeman that scored Macy West. Crisp had previously loaded up the bases in the frame with a walk by Sara Ruth Raines and infield hits from West and Olivia Taylor prior to Bozeman drawing the RBI free pass.

Worth used a hit batter and an RBI double to tie the score at 1-1 in the top half of the third inning, but the Lady Cougars scored eight runs in the bottom half of the frame to take complete control of game one.

Kirin Webb led off the bottom of the third with a single to left field, and an error by Worth County on the play allowed the ball to roll all the way to the fence, giving Webb an opportunity to make it all the way home. Jo Brady followed up with a double to left center, and Raines knocked in the third Lady Cougar run of the game with an RBI single. West subsequently sent Raines home with an RBI infield hit for a 4-1 Lady Cougar lead.

Consecutive one-out walks by Ainslee Forysthe and Bozeman gave Crisp another bases loaded opportunity and Riley Blampied unloaded them shortly after with a three-run double. Brady later knocked in Blampied and Webb for the final two runs of the inning. Crisp led 9-1 at the end of three innings played.

Worth attempted to cut into the Lady Cougar lead during the top half of the fifth inning using a run on three hits, but an outfield assist to third base from Bozeman helped Crisp maintain a 9-2 advantage heading into the bottom half.

The Lady Cougars then scored their final run of game one in the bottom of the fifth. Peyton Adkins led off the frame with a double and Webb knocked in the game ending run when she hit a one-out RBI single to stretch the Crisp lead out to 10-2. The eight-run advantage after five innings of play caused the run rule to take effect.

Rilee Duckworth pitched a five-inning complete game for the Lady Cougars to pick up the win. She allowed just the two Worth County runs on five hits, one walk and one hit batter, while accumulating eight strikeouts.

The second game of the doubleheader ended up being another run-rule victory for Crisp.

After CCHS pitcher Olivia Bridges worked a scoreless top of the first inning, the Lady Cougars took a commanding 8-0 lead in the bottom half.

Blampied led off the bottom of the first frame with a single to centerfield, and Webb subsequently reached base with a walk. Raines later drew a walk to load up the bases for Crisp, and from there the Lady Cougars kept the line moving.

Taylor took a bases loaded walk to force Blampied home for the first run of the game, and Forsythe followed with a two-run double for a 3-0 CCHS lead. Bozeman drove in the fourth run with an RBI single in the next at bat, and consecutive walks from Adkins and Blampied loaded up the bases once more. Webb and Brady added RBI hits shortly after to bring the score out to 8-0 in favor of Crisp heading into the second inning.

Worth got their only run of the contest in the top of the fourth inning to cut the Crisp lead to 8-1, but the Lady Cougars pushed across three more scores in the bottom half for the 11-1 final score line after just five innings of play.

West hit an RBI double off the fence in centerfield that scored Raines during the bottom of the fourth, and Forsythe hit an RBI triple into the left field corner later in the frame before scoring on a wild pitch to account for the CCHS runs during the fourth.

Bridges got the game-two win in the circle for the Lady Cougars by pitching five innings and allowing just one run on five hits while striking out seven Worth County batters.

The two wins brought Crisp County’s record in region 1-AAA play to 5-0, with a 10-3 overall mark.

The Lady Cougars are scheduled for four games next week, beginning with a contest at Perry High School on Monday. On Wednesday Crisp hosts a doubleheader against Cook High School (8-7 overall, 4-1 in region) starting at 4 p.m. with the top spot in the region on the line. The Lady Cougars will subsequently finish out next week’s schedule with a non-region home game against Coffee County High School (9- 9) at 6 p.m.

Lilah Deal had two hits and two RBIs in two at bats for CCMS, while Addie Hobbs also added two RBIs and one hit to help lead the Lady Cougars to the win. Reagan Bozeman pitched three innings and recorded six strikeouts for CCMS.

The CCMS Lady Cougars brought their record to 7-0 on the season with the win. The middle school team will play a home game on Monday afternoon against Albany starting at 4:30 p.m.