Cougars defend the Den, knock off 7A Tift County 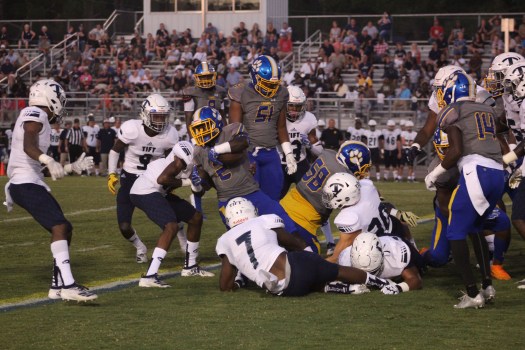 ____________ CCHS running back Marquise Palmer (2) fights his way through the Tift County defense during Friday night's 27-14 Cougar win over the Blue Devils. 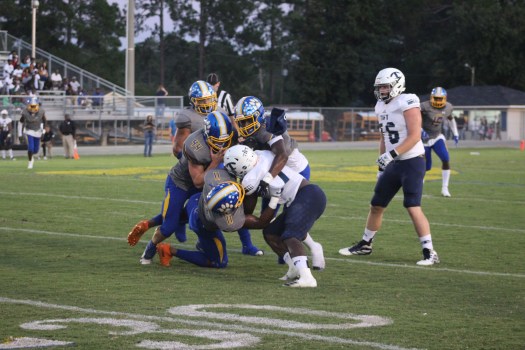 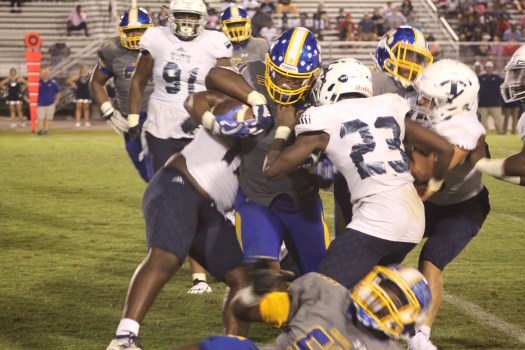 ___________ Crisp County's Chris Paul Jr. (11) fights for extra yards on a running play as a pair of Tift County defenders converge to bring him down.

CORDELE- The Crisp County High School football team evened up their overall record at 2-2 with a 27-14 win over the class 7A Tift County Blue Devils (1-3) on Friday night in the Cougar Den.

The Cougars got on the scoreboard just over five minutes into the game when defensive back Sirad Bryant stepped in front of a Tift County pass attempt for an interception near midfield, which he subsequently returned for a touchdown. Connor Richmond’s ensuing point after put Crisp ahead 7-0 at the 6:47 mark of the first quarter.

After the teams swapped a pair of defensive stops, the Blue Devils put their first points of the night on the board with a 51-yard touchdown run by Walt Jackson. Tift’s point after tied the score at 7-7 with just over 20 seconds to play in the first period.

The Cougars wasted no time in retaking the lead, as on the ensuing drive quarterback Jack Carter threw a pass to Bryant for a big gain on first down to get Crisp out near midfield. Just three plays later, CCHS running back Marquise Palmer outran the Blue Devil defense all the way to the end zone for a 56-yard touchdown run. The point after put Crisp ahead 14-7 less than a minute into the second quarter.

Both defenses dominated the remainder of the second period, as neither team was able to add to their point total before halftime. Tift did manage to get down inside the Cougar 15-yard line with less than four minutes to go in the half, but Crisp County’s Nick Mercer forced a Blue Devil fumble on a tackle in the backfield, and Javan Hardemon recovered the ball for CCHS.

Tift forced a Cougar punt to begin the third quarter, and the Devils took over possession and moved the ball out near midfield. Their promising drive was cut short, however, as Crisp came up with a fourth down stop shortly after. Jayren Fox, Mercer, and Kamron Moate all made key tackles for the Cougar defense to help force the turnover.

Palmer and AJ Lofton got Crisp deep into Tift County territory on the ensuing possession with a couple of key runs. Carter then capped off the drive with a nine-yard touchdown pass to Moate. The Cougars led 21-7 with 4:08 to go in third period following the point after.

Crisp’s J’Kobe Harris intercepted a Blue Devil pass attempt on the subsequent drive, and the Cougar offensive unit quickly made the turnover pay off with Palmer’s second touchdown run of the night. CCHS led 27-7 with 2:18 to go in the third period after the score.

Tift County scored a touchdown with 4:37 to go in the game to bring the score out to 27-14 in favor of CCHS, but the Devils got no closer than that, as Palmer and the Crisp County offense ran out the remaining time.

“I was most proud of their extreme effort,” Crisp County Head Coach Brad Harber said of the performance of the Cougars on the night. “As long as we are getting one percent better every Friday night, we will be playing our best ball in week 11, and that is the goal.”