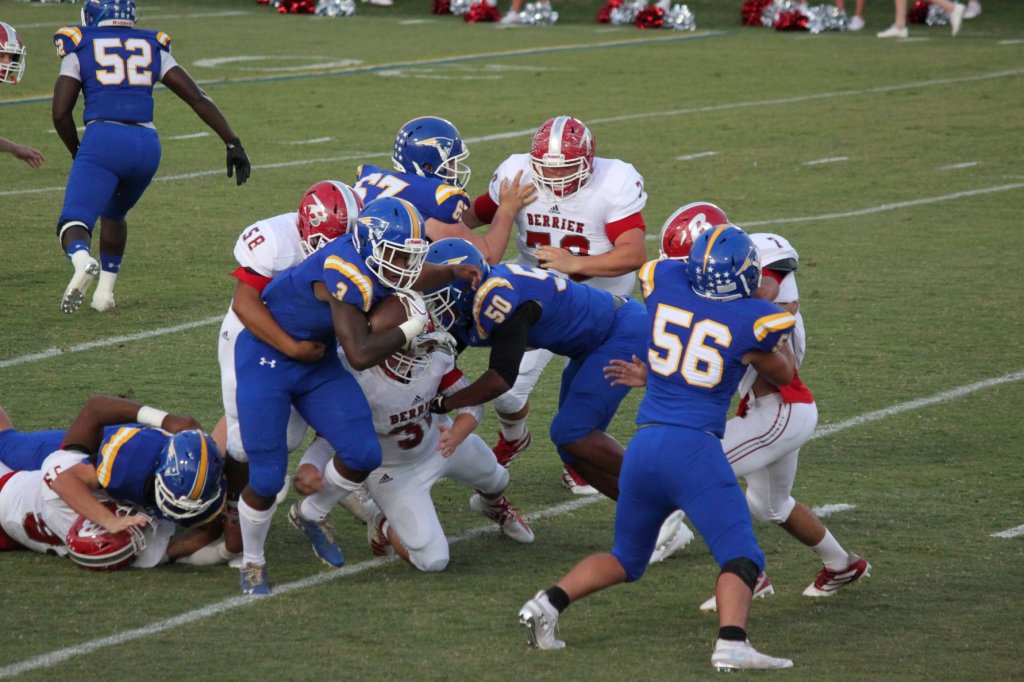 Wilcox County’s football team moved to 3-0 on the season with a 50-0 blowout win over the Berrien County Rebels (2-2) on Friday night in Rochelle.

Desmond Tisdol put the first points of the night on the scoreboard for Wilcox with a four-yard touchdown run in the opening quarter, and the Patriots subsequently poured on 23 points in the second period to take complete control.

Quarterback Noah Hollingsworth scored two of the Wilcox touchdowns in the second quarter on runs of 16 and 20 yards, and Martez Thrower tacked on the other score in the period with a 20-yard run into the end zone. Thrower and Tisdol added two-point conversions during the quarter for a 30-0 Patriot lead heading into the second half.

Thrower scored his second touchdown of the game halfway through the third period on a nine-yard run, and Hollingsworth later threw a short touchdown pass to Cameron Patterson to bring the Patriot lead out to 43-0 entering the final quarter.

The Patriots piled on their final points of night halfway through the fourth quarter on a 10-yard touchdown pass from Abe Stowe to Lagan Luke, followed by Manny Carrillo’s fourth extra point of the night.

According to the stat sheet, the Wilcox offense finished the game with 404 total yards, while the Patriot defense allowed just 199 to Berrien’s offensive unit.

Hollingsworth finished the contest with 12 carries for 140 yards and the pair of rushing touchdowns, while also completing six out of 12 pass attempts for 42 yards and one score. Tisdol finished the game with eight rushing attempts for 102 yards and his touchdown, while Thrower had three rushes for 45 yards and his pair of scores. Dayshawn Lawson added four rushes for 65 yards to help out the Patriot offense, while EJ Howard led the team in receiving with three catches for 29 yards.

The Patriot special teams unit got a pair of blocked punts by Tisdol, and the Wilcox defense forced two Rebel turnovers in the contest.

The Patriots will play their first region contest of the season on Friday night with a home game against the Lanier County Bulldogs (1-2). Wilcox has won four out of the last five meetings against Lanier dating back to the 2014 season. That stretch includes last season’s 61-22 win by the Patriots in Lakeland.