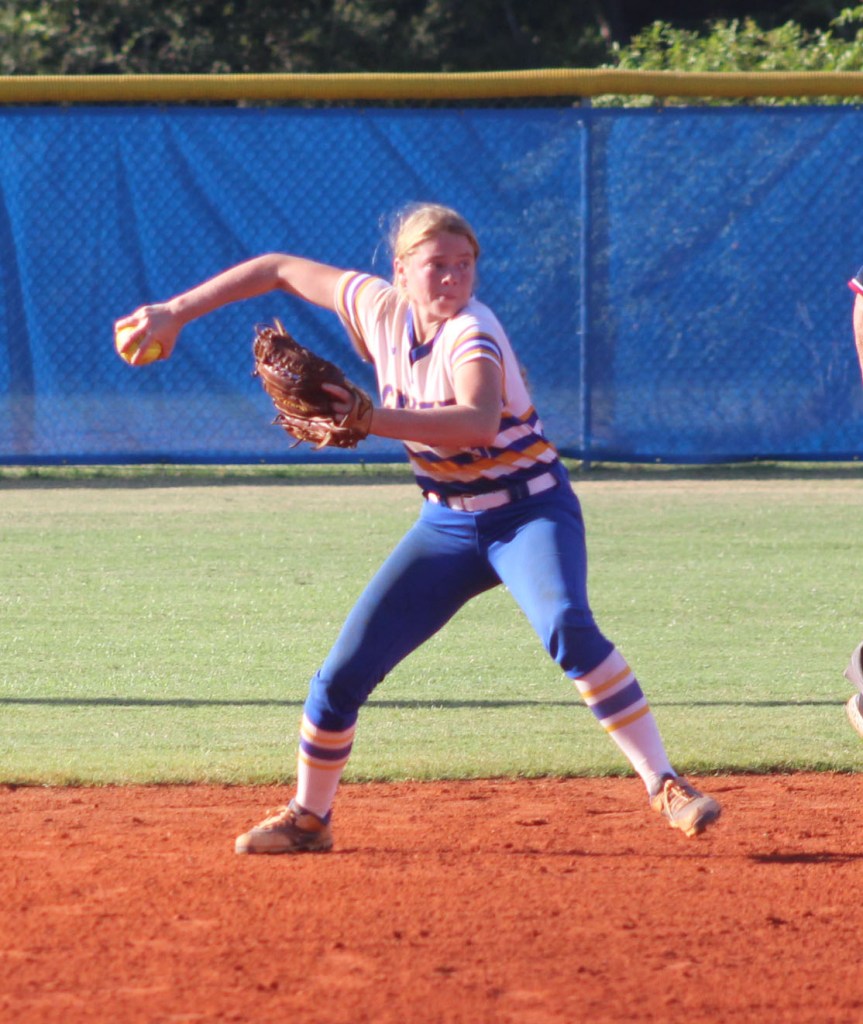 Crisp County's Kirin Webb prepares to make a throw to first base after fielding a ground ball during Thursday's game versus Coffee High.

Rilee Duckworth got the win in the circle for the Lady Cougars in Monday’s road game at Perry by allowing just the one run on eight hits and one walk in seven innings pitched. She also struck out two Perry batters during the contest.

Riley Blampied finished the game with three hits in four at bats, with one run and one stolen base. Kirin Webb drove in two runs in the game for the Lady Cougars. Macy West had the other RBI for Crisp in the contest, while also scoring one run and recording one hit. Jo Brady and Sara Ruth Raines each added one hit apiece for Crisp.

Duckworth pitched five innings for Crisp in the game, allowing five hits and three runs while striking out five batters. Olivia Bridges pitched two scoreless innings in relief for the Lady Cougars and struck out three.

The game one win for Cook on Wednesday brought the two teams to a tie in the region standings with both having a 5-1 record, meaning the title was up for grabs entering game two. The Lady Cougars responded with some clutch run-scoring hits in the decisive contest, and got a strong performance from Bridges over the last several innings to come up with the 7-3 win.

Blampied hit a leadoff home run in the bottom of the first inning of game two to give the Lady Cougars a 1-0 lead.

Blampied led off the bottom of the third with her second solo homer of the contest to get Crisp back within a run of the lead. Raines later reached base in the inning after an error by Cook, and West subsequently made the free base runner count with her first high school home run, a two-run shot to deep left field, to put Crisp ahead 4-3 going into the fourth frame.

Bridges pitched a scoreless top half of the fourth inning, and the Lady Cougars added to their lead in the bottom half with a two-out three-run double by Raines. The bases clearing hit by Raines put Crisp ahead 7-3 going into the fifth frame, and the Lady Cougars protected the lead from there with some strong defense that included a pair of double plays.

Bridges got the win in the circle for Crisp with four and one-third innings of shutout ball with just three hits allowed. Duckworth pitched two and two-thirds innings and conceded three runs on six hits while striking out one Cook batter.

Blampied finished the game with two home runs in two at bats and two walks, plus one other run scored. Peyton Adkins finished with two doubles and a run scored, while West’s home run and Raines’ three-run double accounted for the other two Lady Cougar hits in the contest.

In Thursday’s game, the Lady Cougars fell behind to Coffee in the first inning by a 2-0 score line, and the visitors tacked on five more runs over the course of the game to come up with the 7-0 win.

Forsythe had a double during the seventh inning for Crisp, while Blampied and Olivia Taylor each had one hit in the contest.

The results from this week put the Lady Cougars at 12-5 overall and 6-1 in region competition.

Crisp will host Tift County (7-14) on Monday afternoon with first pitch set for 5 p.m. The Lady Cougars will then play a region doubleheader at Monroe High on Thursday starting at 4. A win on Thursday against Monroe will give Crisp County their second consecutive region 1-AAA softball title.

The middle school Lady Cougar softball team added three wins and a tie this week to finish their regular season schedule with a record of 10-0-1 (W-L-T).

CCMS defeated Albany 17-2 after just three innings on Monday. Camilla Bloodworth had two hits in two at bats and Cate Raines had a triple and two RBIs in the Lady Cougar win. Blakely Young struck out six Albany batters in the game.

On Tuesday CCMS hosted Bleckley County for a doubleheader, and Crisp came out with a win and a tie on the day. Reagan Bozeman led the Lady Cougars to a 6-5 win in game one with two hits in two at bats, while also striking out seven Bleckley batters.

Game two of Tuesday’s doubleheader ended in a 4-4 tie. Anna Leigh Green pitched two and one-third innings for CCMS in the contest and struck out four. Bloodworth also pitched for Crisp in the game, and stuck out both batters she faced. Lily Duncan had two hits in the contest for CCMS, including a double.

The middle school Lady Cougars closed out the week with a 15-0 win over Merry Acres on Thursday afternoon in Albany. Green, Bloodworth, and Peyton Patrick spent time in the pitcher’s circle for CCMS in the game, and they combined to allow no hits.

The CCMS Lady Cougars will be back in action next week, as they will be hosting a first round playoff game versus Worth Middle on Monday afternoon at 4:30 at the Crisp County Recreation Department Youth Sports Complex.