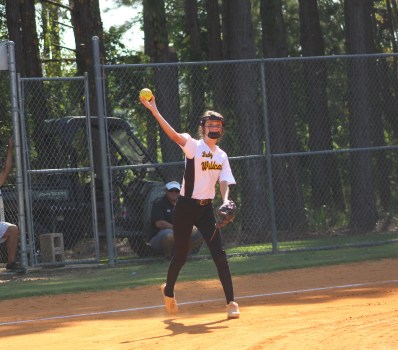 _____________Crisp Academy's Abigail Brown makes a throw to first base during Tuesday's game against Westwood. 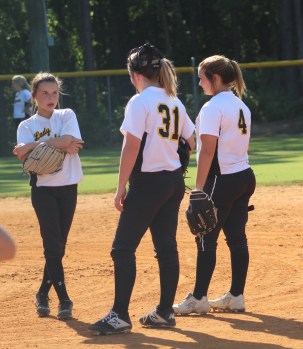 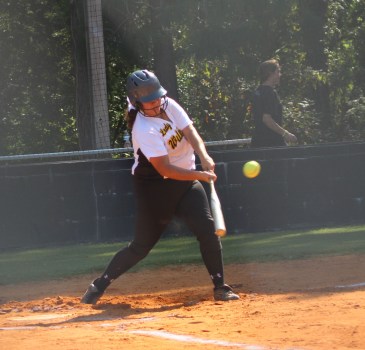 _____________Crisp Academy's Mia Purvis attempts to get a hit during Tuesday's game versus Westwood.

The Crisp Academy Lady Wildcat softball team (0-11) dropped a pair of region games this week against Westwood and Terrell Academy.

CA fell to a 16-5 home defeat against Westwood on Tuesday afternoon, and then subsequently dropped Thursday’s home contest against Terrell by a final score of 19-6.

The CA Lady Cats will play their final two region contests of the season next week with a home matchup against Southwest Georgia Academy on Tuesday, followed by another matchup with Westwood on Thursday, this time in Camilla. Both contests are set for a 4 p.m. first pitch.

The Fullington Academy Lady Trojan softball team picked up a road region win over Community Christian of Adel on Tuesday afternoon by a final score of 16-0 after just three innings of play.

Highlighting the Lady Trojan offensive output on the day was a bases clearing inside the park home run by Ella McGalliard during the top of the second inning that put Fullington up 6-0. The team plated 11 total runs during the second frame.

Rogers pitched three shutout innings and struck out eight to get the win in the circle for Fullington.

On Thursday afternoon in Pinehurst, Fullington matched up with the Berrien Rebelettes (15-3) for the second time this season, and just as the previous meeting (an 8-1 Lady Trojan win in Nashville on August 29) the road team came out with the win.

Berrien led 8-0 after the top of the fourth inning in Thursday’s game. The Lady Trojans scored three runs in the bottom of the frame to make the score 8-3 in favor of the visitors, but Berrien scored five more runs over the final two frames to go in front by a score of 13-3. Fullington scored three times in the bottom of the seventh frame to bring the final score line to 13-6 in favor of the visitors.

McGalliard finished the game with three hits to lead the Lady Trojan batting lineup. Phillips and Rogers each had two apiece, while Marley Jones, Rucker, and Roberts each had one.

The Lady Trojans are now 11-4 so far this season with a mark of 3-0 in region competition.

Up next for Fullington is a home game against Windsor Academy on Monday starting at 4:30 p.m. Following Monday’s game, the Lady Trojans will play two region contests to close out the week. The first is schedule for 4:30 at Georgia Christian School on Tuesday afternoon, with the second set for Thursday in Pinehurst versus Citizens Christian Academy.