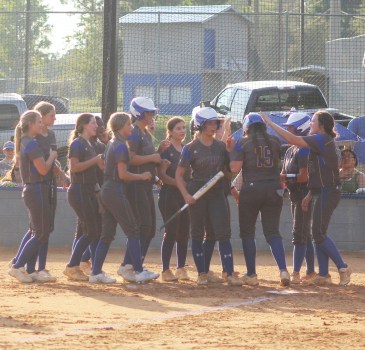 ____________________Wilcox County's Carlee Walls (19) is greeted by her Lady Patriot teammates as she finishes rounding the bases following her home run in Tuesday's game against Charlton County. 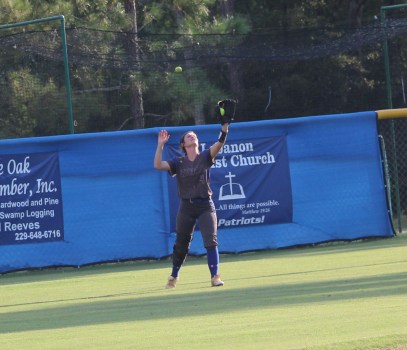 ___________________Wilcox County senior outfielder Maci Martin battles the sun as she secures an out during Tuesday's Lady Patriot win over Charlton. 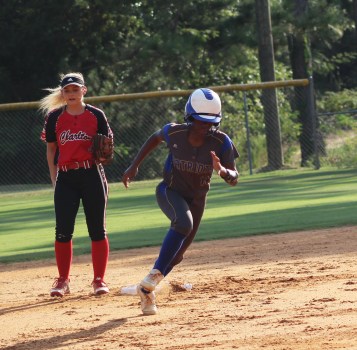 ____________________Wilcox County infielder Destiny Tisdol rounds second base heading for third after a base hit from a teammate during Tuesday's win over Charlton County. 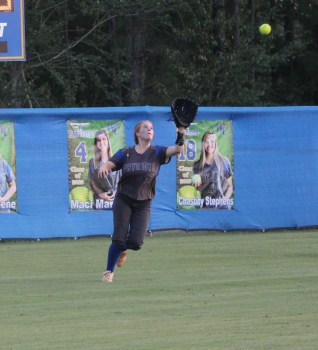 The Wilcox County Lady Patriot softball team added two wins to their record this week. On Tuesday Wilcox picked up a key region win in Rochelle over Charlton County (11-6 overall, 8-3 in region) by a final score of 8-5. The Lady Patriots then went on the road and defeated Johnson County (12-5 record) by a score of 8-0 on Wednesday afternoon.

In Tuesday’s region contest against Charlton County, Wilcox got out to a 4-0 lead after three innings played. Chastity Stephens hit an RBI single in the first inning to score Destiny Tisdol for a 1-0 lead, and Carlee Walls hit a two-run home run in the bottom of the third to put Wilcox up 3-0. A Charlton error later in the third put Wilcox up 4-0.

Charlton County chipped into the Patriot lead with a pair of runs in the top half of the fifth, but Wilcox answered with two more runs in the bottom of the fifth on RBI hits by Maci Martin and Lexie Anderson, giving WCHS a 6-2 lead entering the sixth frame.

Stephens and Mackenzie White each added RBI hits for Wilcox in the bottom of the sixth for the final two Patriot runs of the day. Charlton scored three runs during the top of the seventh to cut into the Wilcox lead, but 8-5 was as close as the visitors got.

Stephens got the win for the Lady Patriots after pitching a seven-inning complete game in which she conceded four earned runs on nine hits and three walks while recording six strikeouts.

In Wednesday’s non-region road game at Johnson County, Bloodworth led the Lady Patriots to the victory by pitching a seven-inning complete game shutout, in which she allowed just three hits and one walk while striking out two batters.

The Lady Patriots piled on six runs in the top of the seventh frame to leave no doubt of the win.

Following this week’s contests, the Lady Patriots now have an overall record of 13-5 with a 10-2 mark in region competition. As of Friday’s updated GHSA class A power ratings, Wilcox sits at number 13. The top 24 ranked teams in class A make the playoffs at the conclusion of the season.