Cougars hang on for thrilling 24-21 win over South Gwinnett 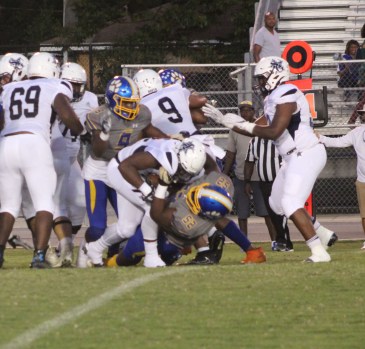 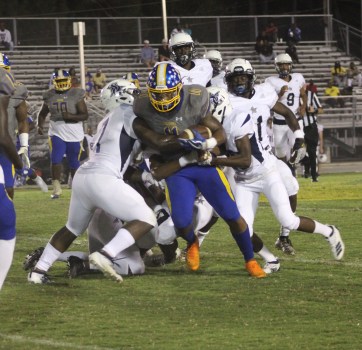 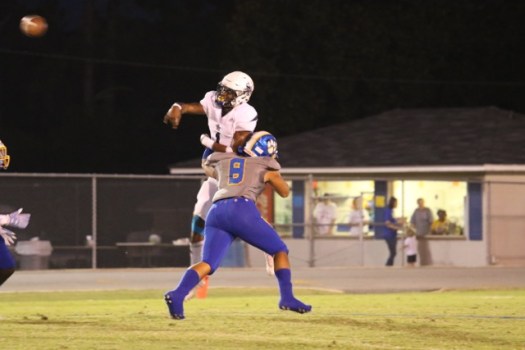 CORDELE— For the second week in a row the Crisp County High School football team knocked off a tough class 7A opponent, as they held on for a 24-21 win over the South Gwinnett Comets on Friday night in the Cougar Den.

A 19-yard field goal from Connor Richmond gave the Cougars the 24-21 lead with 2:15 to go in the contest, and the CCHS defense made the three-point advantage stand up by holding South Gwinnett out of the end zone as time expired on the last drive of the night.

The Comets previously put the first points of the night on the scoreboard during the opening quarter with a 12-yard touchdown pass just over six minutes into the game.

The Comets held a 7-0 advantage in the contest until Crisp County’s Marquise Palmer scored a 26-yard rushing touchdown near the halfway mark of the second period. The Cougars subsequently scored a two-point conversion on a pass from AJ Lofton to Ethan Pollock for an 8-7 lead. The Crisp special teams unit had previously set up the scoring possession with a partially blocked punt by Trenton Richey that gave the offense good field possession out near the 50-yard line.

The visitors attempted to throw the deep ball on their ensuing offensive possession, but the Cougars forced a turnover on the drive when Sirad Bryant came up with an interception near midfield.

The teams traded stops over the next couple of drives, but Crisp County’s special teams unit again got heavy pressure on the South Gwinnett punter and forced another blocked kick to give the Cougar offense a short field and a chance to add to the lead. They did just that when Richmond hit his first of three field goals on the night for an 11-7 Cougar advantage with less than 40 seconds to go in the first half. Crisp took the 11-7 lead into the halftime break shortly after.

The Comets took a 14-11 lead at the 8:03 mark of the third quarter after scoring a touchdown on the opening drive of the second half.

The Cougars responded with an 80-yard scoring drive that ended with a touchdown pass from Lofton to Chris Paul Jr. Richmond’s point after gave Crisp an 18-14 lead with 3:22 to go in the third period.

The visitors then punched in a short touchdown run on their next possession to go in front by a score of 21-18 with 10:20 to go in the game.

Trae Walker returned the ensuing kickoff out past midfield to set the Cougars up with a good chance to score. Crisp got the ball down to a goal to go situation shortly after following runs by Palmer and Lofton, but the Comet defense made CCHS settle for Richmond’s second field goal of the night. The 20-yard kick tied the score at 21-21 with just over six minutes to play in the fourth period.

South Gwinnett attempted another deep pass two plays into their next drive, but Lofton got in front of the intended receiver and pulled in an interception to give the Cougars a chance to grab a late lead.

Three plays later, Lofton threw a deep ball of his own and Bryant reeled in the pass for what ended up being a gain of over 40 yards that set Crisp up with first and goal from the Comet nine-yard line.

From there the South Gwinnett defense forced the Cougars to send out the field goal team on a fourth down play, and Richmond’s third successful attempt of the night gave the Cougars the late 24-21 lead.

The Comets used several big pass plays to move the ball down inside the Crisp 10-yard line with less than 20 seconds to go. Following a pass completion down near the goal line, South Gwinnett attempted to spike the ball with less than three seconds left to try for one more chance, but a penalty forced the remaining time to run off.

“The thing that we have been preaching over and over again is just giving relentless effort all the time,” Crisp County Head Coach Brad Harber said following the Cougar win. “I am really proud of the players. I am also proud of the coaches for how hard they have been working, not only watching film and in practice, but also building these relationships. When you have tough games like we have had in all of them to this point, the thing that brings you through is the closeness of the coaching staff and the players.”

With the win, the Cougars are now 3-2 on the season.

“We have another tough one coming next week, so we will celebrate this one for 24 hours and then move on to the next,” Coach Harber added.

The defending class 5A state champions, the Bainbridge Bearcats (4-0), will make a visit to the Cougar Den next Friday night.