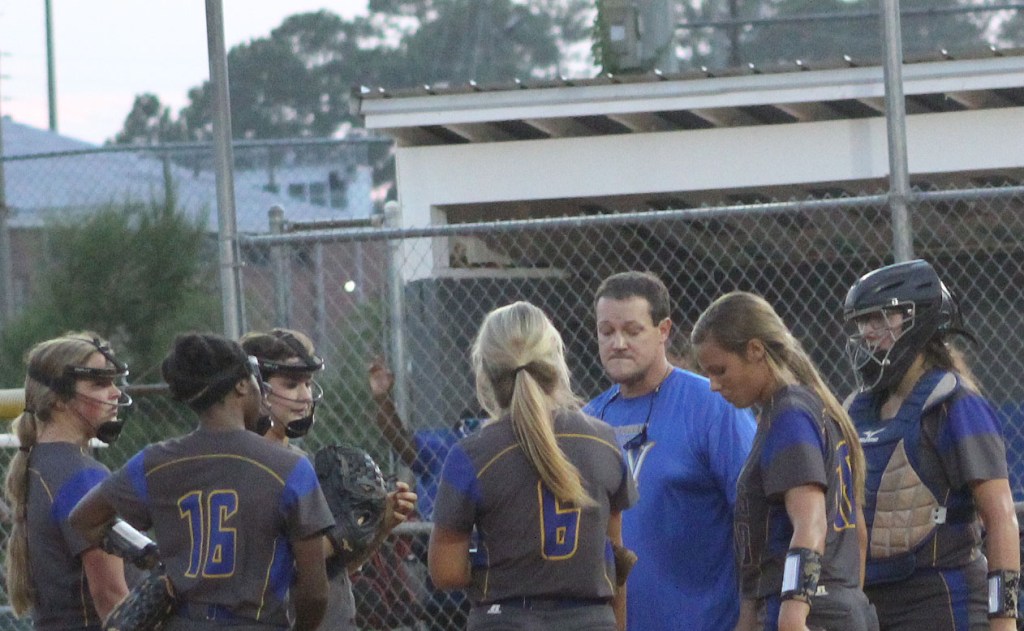 Several members of the Wilcox County softball team meet Head Coach Wade Burnette to discuss strategy during a mound visit in a game earlier this month against Charlton County.

The Wilcox County High School softball team had a three-game schedule for this week and they came out on top in all of the contests.

Wilcox won a road game at Wheeler County High School by a final score of 6-3 on Monday afternoon.

The Lady Bulldogs of Wheeler County (15-7 overall record) won the first matchup between the two teams this season by a final score of 8-4 in Rochelle on August 5, but the Lady Patriots returned the favor by winning Monday’s matchup in Alamo.

Chastity Stephens got the win in the circle for the Lady Patriots in Monday’s game. She accumulated 16 strikeouts on the day over seven innings pitched, while allowing three runs on five hits.

In Tuesday’s home region contest against Echols County, the Lady Patriots led 5-0 after the second inning, and they subsequently outscored the visitors 11-1 in the third inning to end the contest after just three complete frames for the 16-1 final.

Blakelyn Bloodworth pitched all three innings for Wilcox in the contest and allowed just one unearned run on one hit while recording three strikeouts.

Grace Keene, Bailee Barnard, and Madison Terry all had two hits apiece to lead the Wilcox batting lineup versus Echols. Tisdol, Stephens, Walls, Bloodworth, and Jalynn Keene all added one hit to the Lady Patriots’ total in the contest.

Wilcox got on the scoreboard first in Wednesday’s battle between the top two teams in region 2-A with an RBI double from Stephens that scored Nutt during the top of the first inning.

The Lady Patriots held the 1-0 lead over the next several innings, as Stephens and Lanier pitcher Aniston Gano shut down their opposing batting lineups until the sixth frame.

Wilcox added three runs in the top half of the sixth on four hits, including an RBI double by White, and RBI singles by Martin and Bloodworth.

Lanier scored their only run of the contest in the bottom of the sixth after one hit and a Wilcox error. Neither team scored during the seventh inning, leaving the Lady Patriots with a 4-1 win on the day.

Stephens pitched a seven-inning complete game for Wilcox, and allowed just one unearned run on three hits and one walk while striking out six batters.

Walls led the Lady Patriot batting lineup with two hits, while White, Stephens, Martin, Bloodworth, and Jalynn Keene each finished with one in the game.

As of Thursday morning’s updated GHSA class A softball power ratings, the Lady Patriots had a ranking of number 11 out of 50 teams. The top 24 teams in the rankings make the playoffs at the conclusion of the regular season.

Wilcox will be on the road at Charlton County (13-6 overall, 10-3 in region, third place in 2-A standings) on Monday afternoon starting at 5:30 p.m. Following Monday’s game, the Lady Patriots will play their final home game of the regular season against Worth County on Tuesday starting at 5:30. Wilcox will finish out the regular season with a road region game against Clinch County (11-10, 7-6 region record, fifth place in 2-A standings) on Thursday afternoon with first pitch set for 6 p.m.